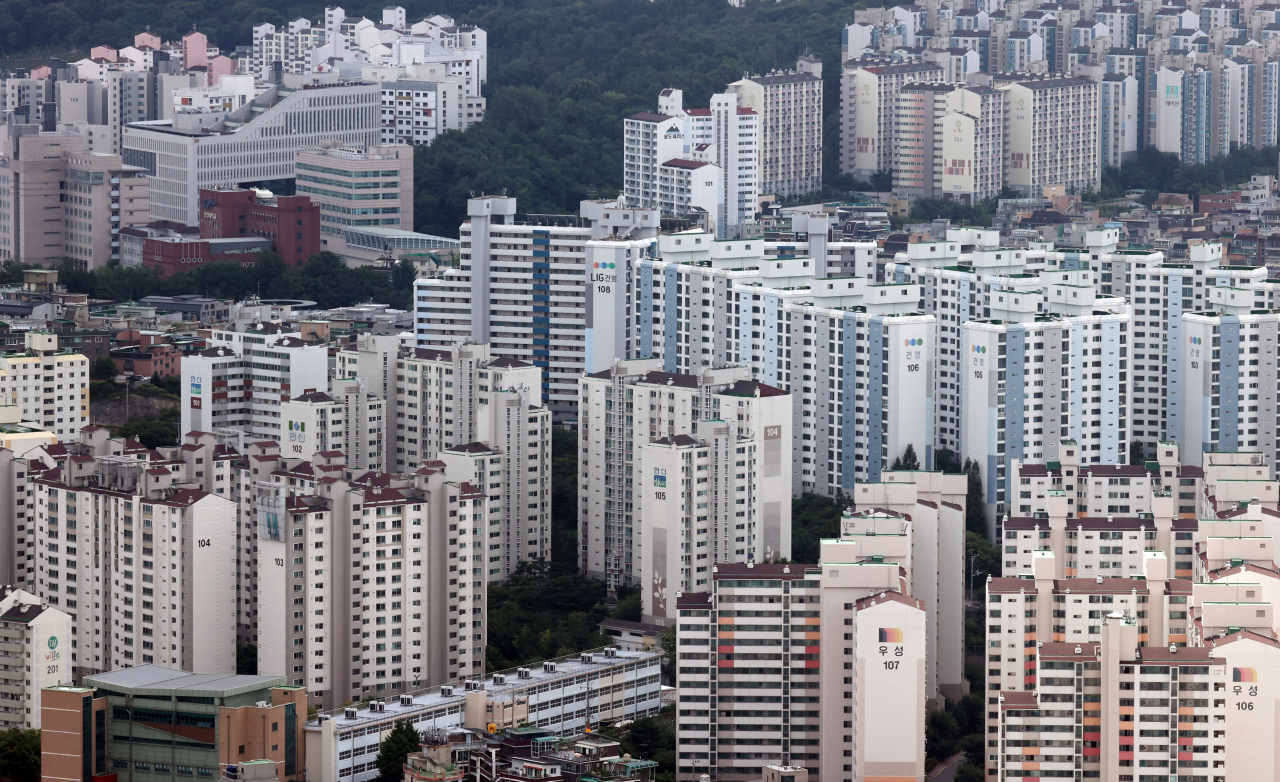 Aerial view of apartment complexes in western Seoul (Yonhap)
The rupture of Japan’s bubble in the 1990s after a decade of economic prosperity has been cited as an important case study for the South Korean economy given the similarities between the two countries’ economic structures, and their financial and legal systems.

The prosperity in Japan brought about a rapid acceleration of asset prices some 30 years ago, when real estate and stock market prices became “overheated.” After the bubble burst in 1992, Japan entered a long period of economic stagnation that left investors out in the cold.

Today, amid Korea’s snowballing household debt in fast-surging asset markets from housing to stock, critics have been ringing the alarm and suggesting Asia’s fourth-largest economy might be following in Japan’s footsteps. A bubble burst is imminent here, they say.

Though experts are divided on whether the real estate market has entered a bubble, the nation’s fiscal and monetary policy leaders have indirectly acknowledged that it is at least close.

“Both South Korea and the US real estate markets have entered a bubble,” said economist Han Sang-wan, former head of research at the Hyundai Research Institute.

“The property prices will continue to surge to the end of this year and on to next year and if the bubble bursts, Korea will be dealt a harsher blow compared with the US,” he added.

Median apartment prices in Seoul and other key metropolitan areas here gained 11 percent from the beginning of the year through July, marking the largest gain in the cited period since the state-run Korea Real Estate Board started compiling data in 2003. Average apartment prices in the nation’s capital, Seoul, gained nearly 100 million won ($87,000) or 9.7 percent in the first six months of this year to record 1.14 billion won, real estate data provided by KB Kookmin Bank showed last month.

Separate data from KB Kookmin showed that average apartment prices in Seoul grew 19 percent on-year in July, hitting a 19-year high. Not since 2002, when the corresponding figure stood at 23.1 percent, have apartments in the capital been more expensive.

Commercial banks here have started to temporarily halt either all or some of their mortgage lending, wary of the rapid growth in household credit and financial regulators’ warnings of “strong” measures to tackle the issue.

According to Han, the real problem lies with the heated housing market, rather than the stock market.

“It hit the US and the European markets the hardest because the economies at the time were burdened with an unprecedented growth of household debt,” the expert added. From 2001 to 2007, US mortgage debt -- the largest component of household debt there -- nearly doubled.

If a bubble is about to burst, Korea is in trouble. Korea’s household debt-to-gross domestic product ratio gained some 7 percentage points to 90.3 percent as of the end of the first quarter compared with end-2019, according to the Korea Institute of Finance. Household credit gained a record 168 trillion won on-year or 10.3 percent in the second quarter to 1,805 trillion won, according to central bank data released Tuesday.

The growth has so far shown no signs of slowing down, with people flocking to banks to purchase homes on low-rate mortgages, fearing they might miss the opportunity as prices continue to rise.

“The housing prices have jumped in the short-term, which means that once prices start to drop, the damage will be colossal,” he added.

But those less skeptical say it is too early to label the current situation a bubble.

“It’s the same story over and over again -- we have been concerned that the market would enter a bubble, collapse and enter a period of economic stagnation similar to that of Japan for the last 20 years,” said Joo Won, deputy director of the Hyundai Research Institute.

“As long as there is a solid supply of capital, the risk won’t grow too big and other global economies have been dealing with the same overheated real estate market,” he added.

Following in the footsteps of commercial lenders, some of the local brokerages have temporarily suspended their securities-based lending services. This was apparently due to the record outstanding loans extended by brokerages for stock investments. Total lending in this category crossed the 25 trillion won mark for the first time Aug. 13 and remained there for four trading days, Korea Financial Investment Association data showed. 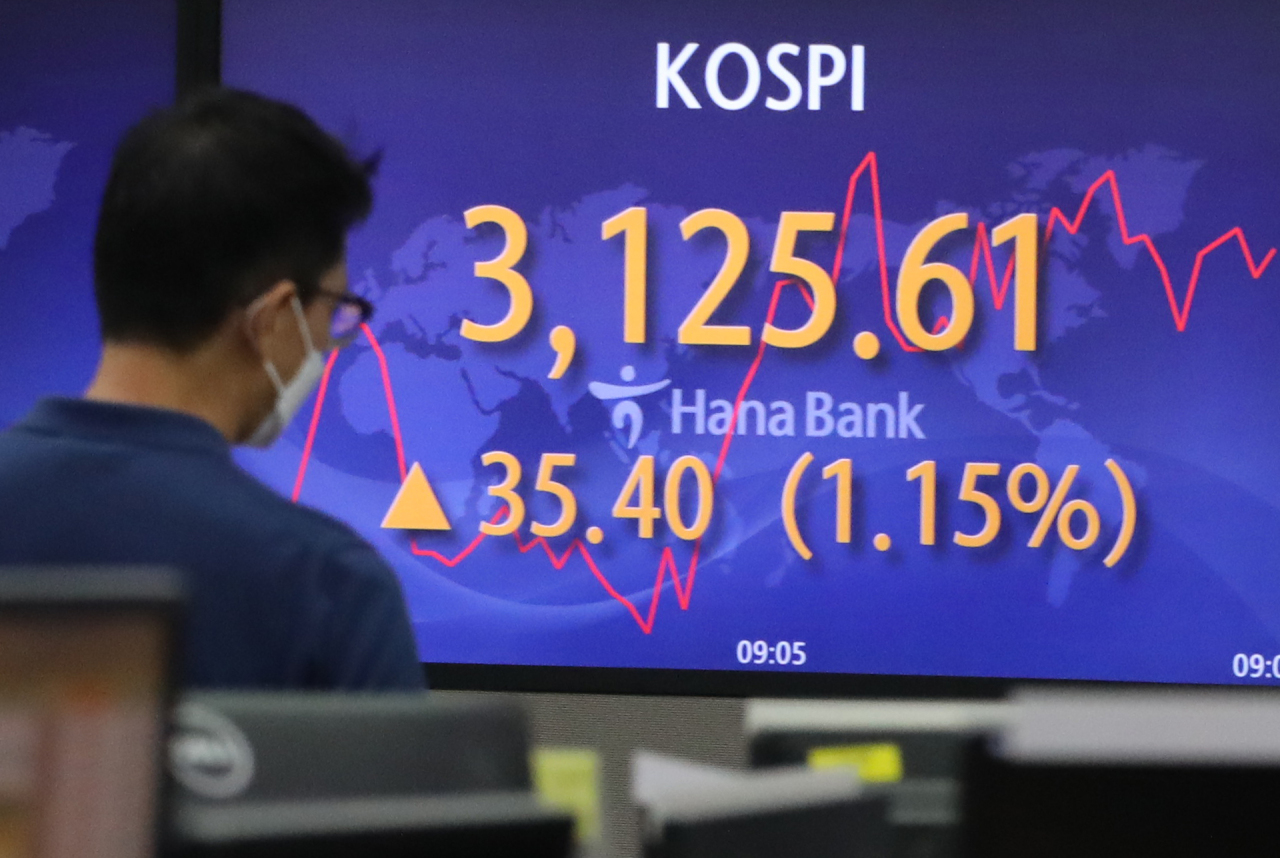 A monitor at the dealing room of the headquarters of Hana Bank shows the benchmark KOSPI price on Tuesday (Yonhap)
The record-low interest rate and increased borrowing have fueled a “Donghak Ant Movement” -- a stock-buying spree driven by retail investors -- and the country’s benchmark Kospi has shot above 3,300 points, while the tech-heavy Kosdaq traded above the 1,000-point level in the first half of this year for the first time since the dot-com bubble burst 20 years ago.

Though experts admit that the stock market may have entered a “bubble,” they say the current rally will have more resilience than the real estate boom.

“Under long-term anticipations that the job market and inflation will stabilize, the bubble is unlikely to burst easily,” said Lee Eun-taek, an analyst at KB Securities.

“Despite warnings of a bubble, it is too early to give up on the Korean stock market and once the market overcomes ‘tapering’ issues, it is projected to extend its growth.”

In recent sessions, the US Federal Reserve’s July meeting minutes -- hinting at tapering as early as the fourth quarter of this year -- sent jitters across the country’s main bourse, the Kospi.

The BOK has been hinting at a shift in its monetary policy for some time now and is widely expected to carry out a 25-basis-point rate hike at its upcoming rate-setting meeting, scheduled for Thursday. It has maintained a record-low interest rate of 0.5 percent for more than a year now, with the economy continuing to combat coronavirus woes.

The BOK rate hike is projected to suck excess liquidity from the market, and while it will put the brakes on the nation’s snowballing debt, investors should keep an eye on US monetary policy, Han warned.

“The first sign of a bubble collapse is sharp rate hikes, which would lead to an inflow of dollars back to the US from global markets,” the expert said.

“But the US Fed has yet to even start tapering, so there is still some time,” he added.