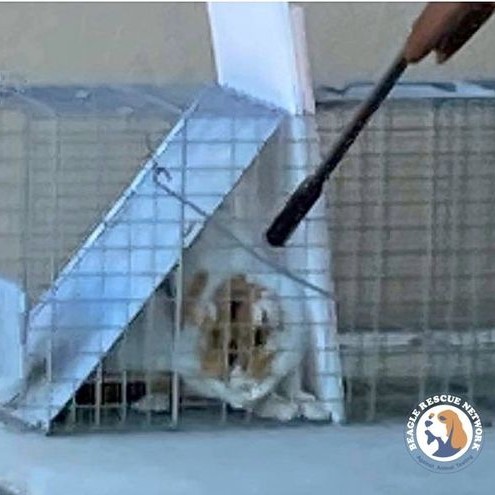 This image captured from a video secured by Beagle Rescue Network shows an air gun held in front of a cat in a cage. (Beagle Rescue Network)
More than 10 feral cats have been shot and killed by US troops stationed here, according to a news report Monday, sparking controversy over animal cruelty.

Public broadcaster KBS aired a video showing someone who appears to be military personnel firing at a cat crouching in a cage with an air gun. The broadcaster said it was filmed at Osan Air Base, a US Air Force base located in Pyeongtaek, Gyeonggi Province, in December last year.

“The harmful animal handling team shot the (captive) cat. They didn’t care whether the cat was sick, injured, old or nursing,” a man who tipped off the incident said in an interview with KBS.

Osan Air Base has been catching stray cats entering its territory since the beginning of last year to ensure the safety of planes taking off and landing in the area and to prevent the spread of infectious disease.

“From April 2021, the pest management team took cats to the veterinarian in the base, and then cats were euthanized at the veterinary hospital,” the informant said.

Since July last year, the method of slaughtering has changed to shooting because euthanasia drugs are expensive and veterinarians can be traumatized, the informant added.

An official at Osan said the cat killings were “done according to the rules,” but that it had stopped the practice from the beginning of this year.

Beagle Rescue Network, a nonprofit organization to rescue laboratory animals, claimed that the group has investigated the case for two months after getting tipped off, according to its Facebook post on Thursday. It secured photos and videos to prove the killings and sent the evidence to the Korean government as well as KBS.

“Such practice clearly constitutes animal cruelty under law and the domestic animal protection law strictly prohibits ‘acts that lead to death in a cruel way,’” it said.