The foxes, born and raised in Seoul Zoo, were set free on Sobaeksan in North Gyeongsang Province, after two months of training designed to help them adapt to life in the wild, the Environmental Ministry said.

“It is the first such reintroduction of red foxes since we started efforts to restore them,” it said in a press statement. 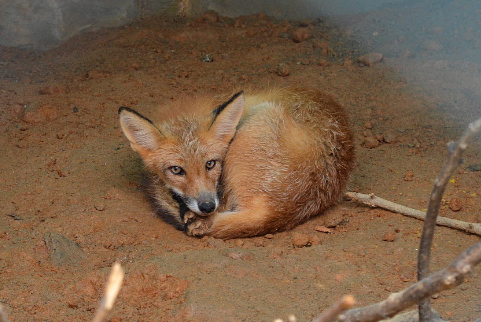 One of the two red foxes released into the wild on Sobaeksan. ( Environmental Ministry)
The ministry aims to increase the number of species that inhabit Sobaeksan to 50 by 2020.

Ten more foxes are currently being prepared for release, undergoing the same training, it added.

Red foxes have not been spotted in the wild in Korea since the carcass of a male fox was found in Yanggu, Gangwon Province, in 2004. They are classified as a first-class endangered species by the ministry.

Foxes are nocturnal and carnivorous, and should pose no threat to hikers, the researchers said.

Red foxes are one of three mammals that Korea is trying to restore to the wild. The two others are Asiatic black bears on Jirisan and goats on Seoraksan.