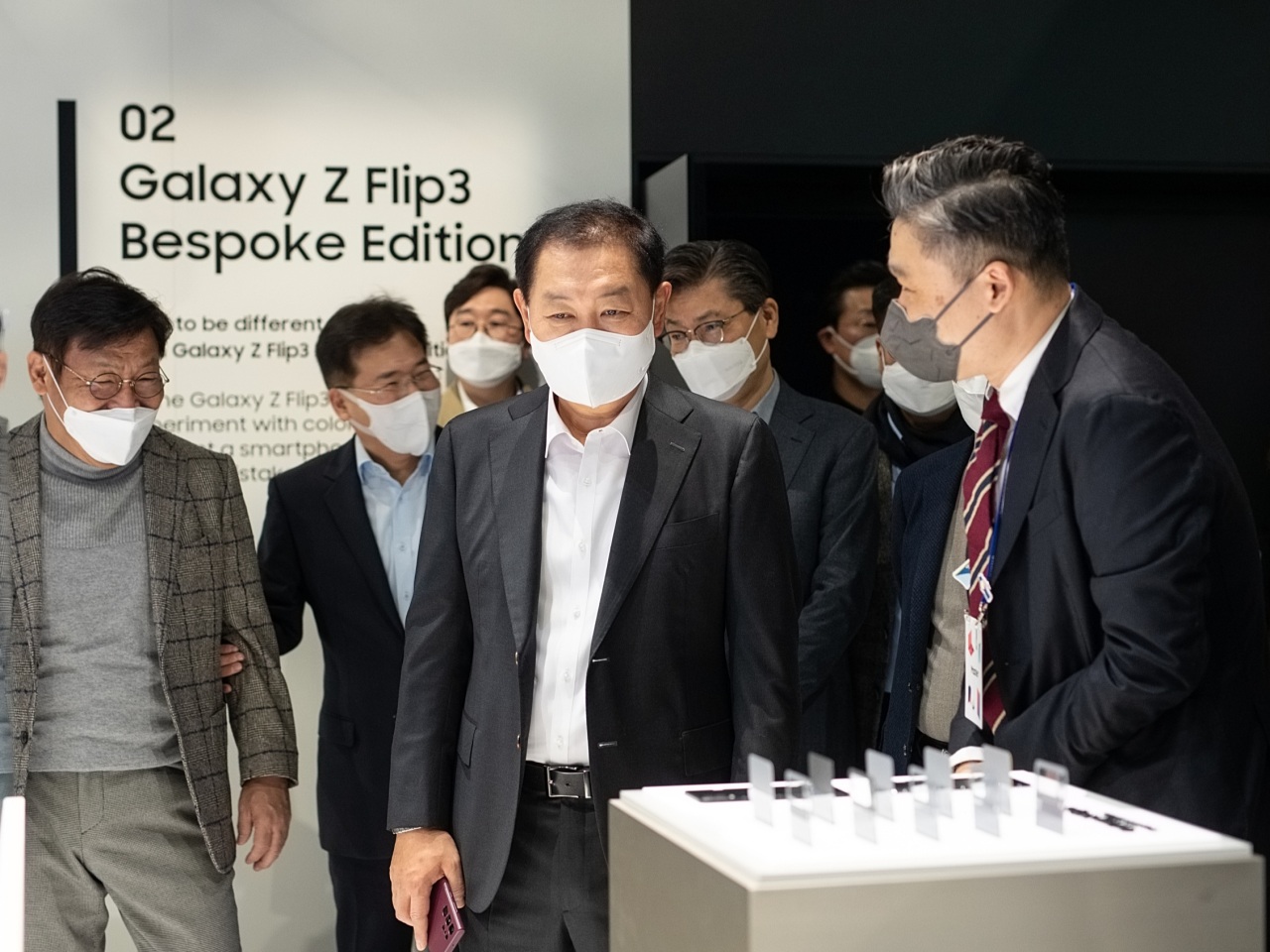 Samsung Electronics Vice Chairman and Head of Device eXperience Division Han Jong-hee (front row, center) is seen during a visit to Samsung Electronics exhibition booth at MWC 2022 in Barcelona, Spain, Monday. (Joint Press Corps)
BARCELONA, Spain -- Samsung Electronics CEO Han Jong-hee has hinted at making a comeback to the global extended reality headset market with a new device that works on a metaverse platform, signalling a possible end to the firm’s three-year hiatus from the industry.

“(Metaverse-related devices) are now the talk of the town, so we have buckled down to a task to cope with the trend. It won’t take too long,” Han, vice chairman and one of Samsung’s two CEOs who is in charge of the device experience division, told reporters during his visit to Samsung’s MWC 2022 exhibition booth Monday.

Han, however, did not disclose an estimated launch date for the new device, or what function it would have on the metaverse platform. This means the new release could be a head-mounted display for gamers, smart glasses, or another form factor hardware.

“We are striving for perfection as we gear up for the launch,” Han said.

The South Korean tech firm effectively killed its headset lineups, Odyssey and Gear VR, before the concept of the metaverse became a buzzword globally with the onset of the COVID-19 outbreak.

In November 2019, Oculus VR, US-based Meta Platform’s virtual reality gear arm, announced plans to discontinue app development for Samsung’s Gear VR headset lineup. Oculus has released five versions of the Gear VR headset since 2014 in partnership with Samsung, and allowed the devices to be compatible with dozens of Samsung smartphones.

Moreover, its HMD Odyssey and Odyssey Plus, headset variants for Samsung‘s gaming gear lineup Odyssey, turned out to be one-off products with no device updates since 2018.

In the meantime, Chinese tech giants such as Tencent, Alibaba and ByteDance announced plans this year to ramp up their metaverse footprint in the field of gaming headsets, smart glasses, social apps and the like, following Xiaomi and Huawei.

If Samsung‘s new XR device turns out to be true, it is likely to be another expansion of Samsung’s Galaxy ecosystem -- enabling users to move between multiple devices ranging from smartphones to tablets, wearable devices and laptops.

Han said Samsung‘s pursuit of multi-device connectivity would be a “competitive edge” over tech rivals, as his focus during his visit to Chinese electronics rivals was on “the connectivity between devices instead of individual products.”