[ The Korea Herald – Send E-mail ]
South Korea-US defense cost-sharing talks fall through
By Park Han-na
Published : Nov 19, 2019 - 16:00
Updated : Nov 19, 2019 - 17:55
Differences between South Korea and the United States over how much Seoul should pay for the upkeep of the 28,500 US troops stationed here have come to the fore, with the two sides cutting short their meeting Tuesday.

“There was a considerable difference between proposals of the US and the South in principle,” Jeong Eun-bo, South Korea’s top negotiator, said at a regular briefing. 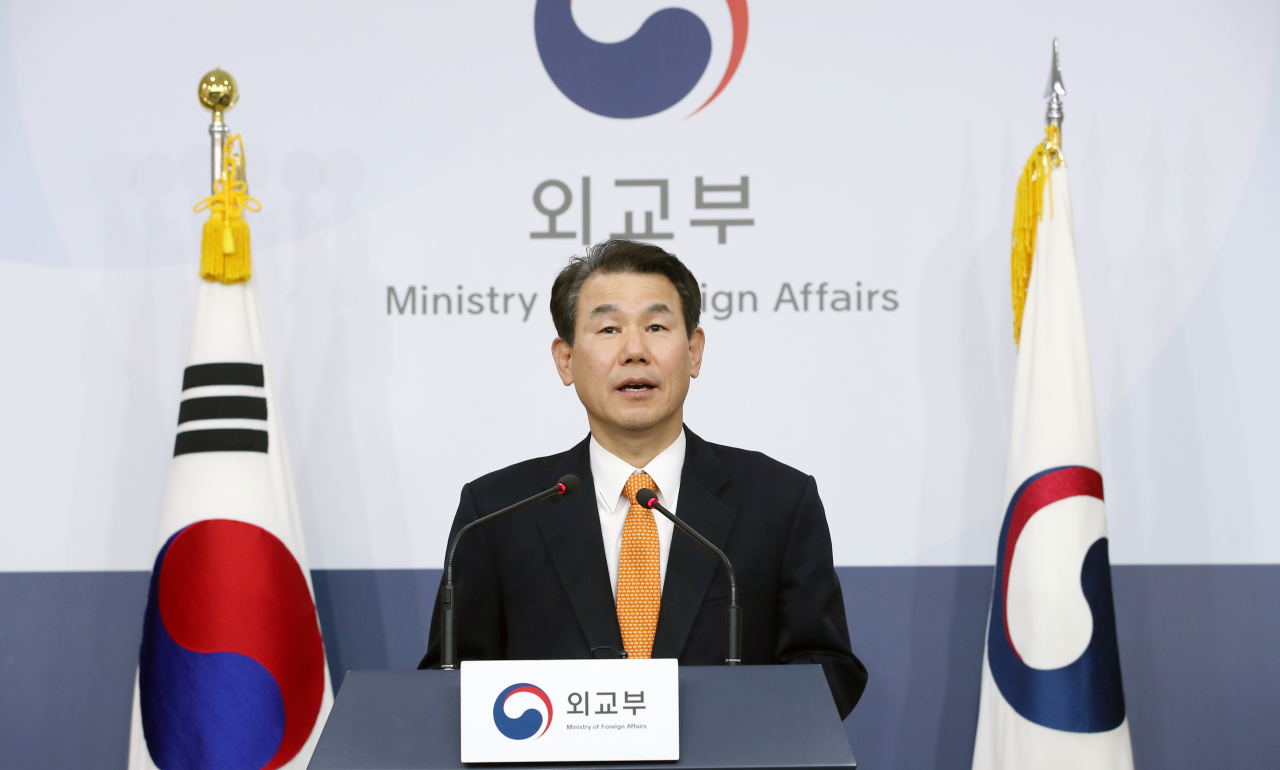 Jeong Eun-bo, South Korea's chief negotiator in defense cost-sharing talks with the US speaks during a regular press briefing at the Ministry of Foreign Affairs in Seoul, Tuesday. (Yonhap)
The US negotiation team, led by James DeHart of the State Department, left the negotiating table earlier than planned on the second day of talks with the South Korean delegation in Seoul for the 11th Special Measures Agreement, the two sides’ defense cost-sharing accord, according to the Foreign Ministry.

The meeting was scheduled to take place from 10 a.m. to 5 p.m., but it was cut short before noon.

Jeong said the US side has not brought up the issue of the possible withdrawal or reduction of USFK troops since the talks began in September, brushing off concerns being raised after Trump’s previous remarks that he is willing to pull out troops from allies whose contributions fall short of his expectations.

“The US side holds the position that the share of the defense cost could increase drastically by establishing a new article (in the cost-sharing deal), while our side maintains the increase should be within the range that is mutually acceptable within the framework of the SMA that the South and the US have agreed on over the last 28 years,” the ministry said in a press release.

The US has pushed for Korea to pay around $5 billion next year -- five times the $924 million that Seoul agreed to shoulder this year -- adding new categories, which reportedly include the costs of joint military exercises and rotational forces of the USFK.

Korea has insisted that the negotiations stick to the SMA’s current framework, which includes the cost categories comprising personnel, military construction and logistical support.

“In any case, our side plans to do our best to ensure we will take a fair share at a reasonable level that contributes to strengthening the South Korea-US alliance and the combined defense posture,” the ministry said.

During a separate press conference after the meeting, DeHart said he had come to Seoul with an open mind to reach a mutually acceptable agreement but South Korea’s proposals fell short of expectations.

“Unfortunately, the proposals that were put forward by the Korean team were not responsive to our request for fair and equitable burden sharing,” he said.

“As a result, we cut short our participation in the talks today in order to give the Korean side some time to reconsider, and I hope to put forward new proposals that would enable both sides to work towards a mutually acceptable agreement in the spirit of our great alliance.”

With Tuesday’s setback, it is uncertain whether the two countries will be able to reach an agreement before the 10th SMA expires Dec. 31.

On Friday, US Defense Secretary Mark Esper said that Korea should pay more to offset the cost of defense, as it is a wealthy country. He added that around 90 percent of the funds stay in South Korea.