Visiting the country as part of his Asia tour, the senior US official met with Korean government officials to discuss the alliance and ways to cooperate in the region, including separate meetings with Kim Hyun-chong, second deputy director of the presidential National Security Office, Foreign Minister Kang Kyung-hwa, and with Chung Suk-hwan, the deputy defense minister for policy. 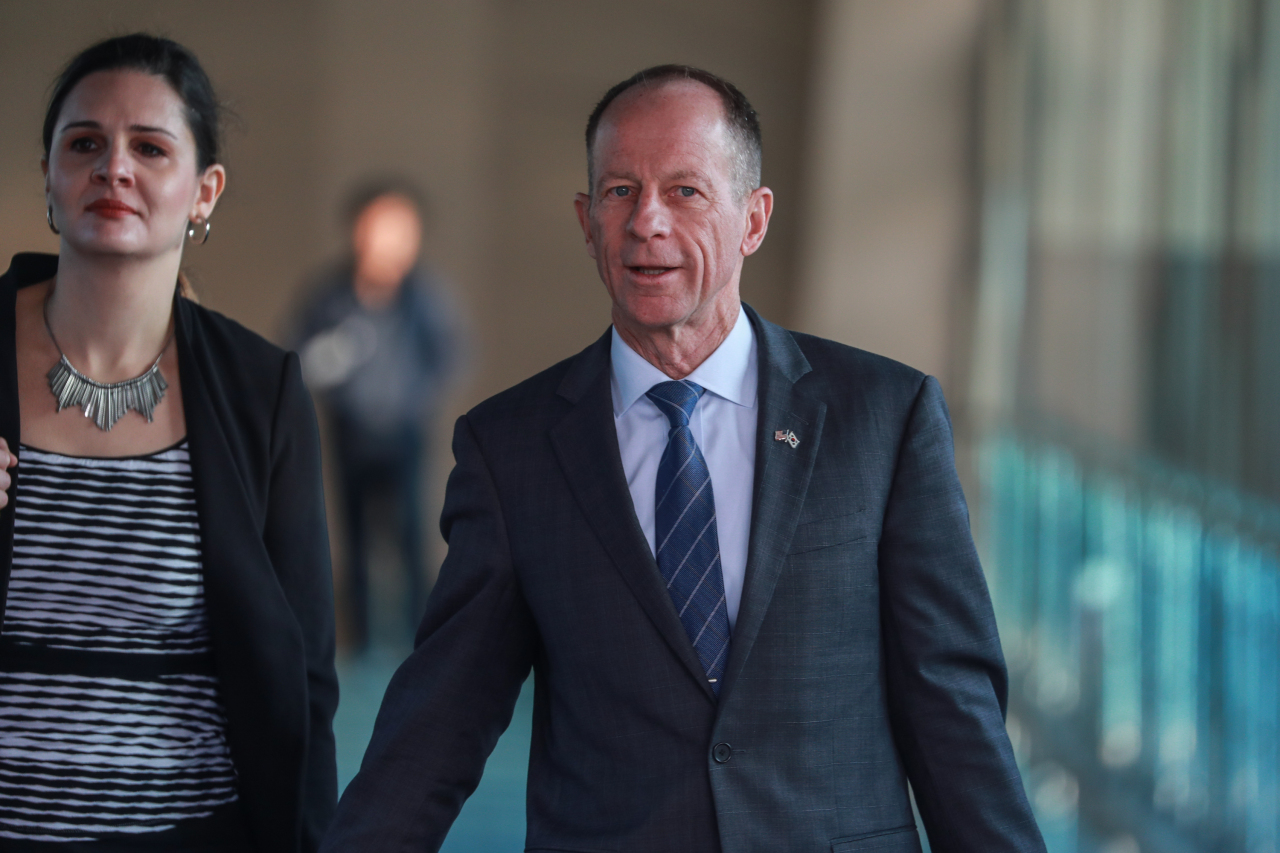 US assistant secretary of state for East Asian and Pacific affairs David Stilwell heads Foreign Ministry in Seoul on Wednesday. (Yonhap)
Cheong Wa Dae said Kim and Stilwell made “detailed, constructive and future-oriented” agreements about General Security of Military Information Agreement (GSOMIA) and the ongoing cost-sharing deal on the maintenance of the US troops stationed here.

“We had fantastic discussions today and on topics of agreements, especially after the event this week in Bangkok at the EAS, so very positive,” Stilwell said as he entered the Defense Ministry in the afternoon, referring to the East Asia Summit earlier this week.

In his discussions with government officials here, Stilwell stressed that the Korea-US alliance is the “linchpin” of peace and security in the Indo-Pacific region. He also mentioned their plans to link Korea’s New Southern Policy with the US’ Indo-Pacific Policy, so as to cooperate with the Association of Southeast Asian Nations in the interest of regional development.

“We managed to further strengthen that in our interactions in Bangkok at the East Asia Summit, where we released a document that identifies areas where the Indo-Pacific Strategy and the New Southern Policy overlap and its significance in the areas we identify of mutual interest and areas of potential cooperation.”

“Very encouraged while we were there to note that President Moon and Prime Minister Abe had the opportunity to talk. That’s an encouraging sign as we watched the relationship improve,” Stilwell said after paying a courtesy call on Kang and meeting with Vice Foreign Minister Cho Sei-young.

Moon and Abe talked for 11 minutes on Monday just before the ASEAN Plus Three summit in Bangkok, in their first one-on-one conversation in more than a year. There, they agreed to resolve the trade row and other issues between the two sides through dialogue, according to Cheong Wa Dae.

The bilateral relationship between Korea and Japan has reached its lowest level, after Tokyo decided in July to impose export controls on essential industrial materials. In response, the Korean government announced it would withdraw from the GSOMIA, an intelligence-sharing pact that was largely encouraged by the United States. Seoul viewed Tokyo’s trade restrictions as retaliation for Korean Supreme Court rulings that Japanese companies are obligated to compensate Korean victims of forced labor.

Seeing tensions escalate between its allies, the US has expressed concerns and openly raised the importance of the intelligence-sharing agreement to the trilateral security alliance in the region.

Stilwell arrived late Tuesday as part of his Asian tour, which kicked off Oct. 24. Before traveling to Korea, Stilwell visited Japan, Myanmar, Malaysia and Thailand. He will leave for China on Thursday.

It is his second visit to Korea since his appointment as assistant secretary in June.