[ The Korea Herald – Send E-mail ]
Wealthy South Korea should pay more for keeping US troops: Esper
By Park Han-na
Published : Nov 15, 2019 - 18:50
Updated : Nov 15, 2019 - 18:50
US Defense Secretary Mark Esper said Friday that South Korea should pay more for the defense the US provides as it is a wealthy country, amid ongoing talks on a bilateral military cost-sharing deal. 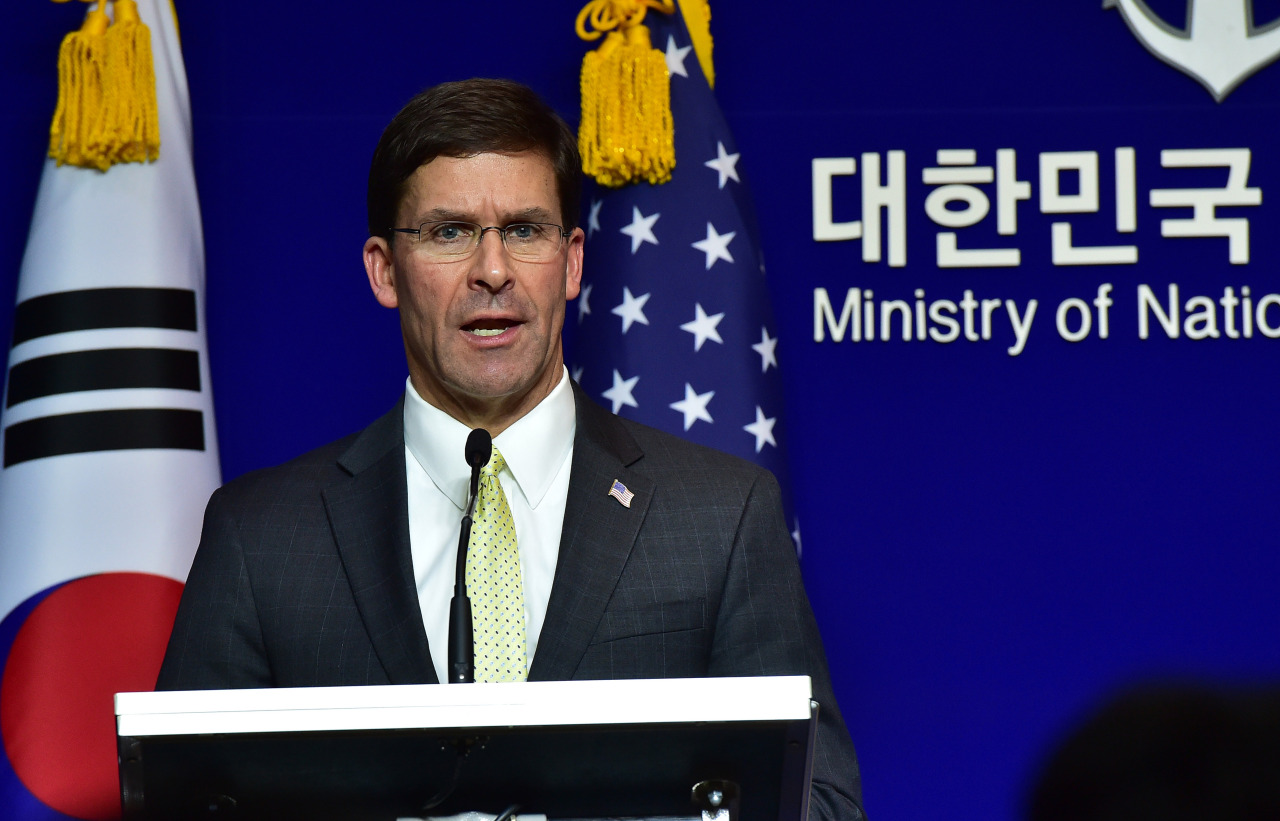 US Defense Secretary Mark Esper speaks during a joint press conference after the 51st Security Consultative Meeting at the Defence Ministry in Seoul on Friday. (Yonhap)
“South Korea is a wealthy country and could and should pay more to help offset the cost of defense,” Esper said in a press conference following the meeting.

Negotiations are underway to renew the Special Measures Agreement, which stipulates how to share the costs for upkeep of the 28,500 US troops stationed in the country.

Although the deal was not included in agenda items the Pentagon chief’s remarks are drawing attention here as Washington has stressed for a sharp hike in Seoul’s contribution.

“It is crucial that we conclude the SMA with increased burden sharing by the Republic of Korea before the end of the year,” Esper said, referring to the official name of South Korea.

The US has pushed South Korea to pay around $5 billion next year, five-times the $924 million that Seoul agreed to shoulder this year, according to news reports.

“In case of South Korea, which has provided a fair amount of support in the past … it is important to note that most of that money stays here in the country. … Around 90 percent of the funds stay here in South Korea it is doesn’t go to the US,” he said.

The South Korean minister said he and Esper shared the view that negotiations on the defense cost deal should be fair and mutually agreeable. He declined to comment on exact amount that Washington requested Seoul to pay.

Esper also reaffirmed that South Korea and Japan should maintain their bilateral defense intelligence sharing deal, which Seoul decided not to extend amid historical and trade disputes.

“GSOMIA is an important tool by which South Korea, the US and Japan share effective information, particularly in times of war. Expiration of the GSOMIA will have an impact on our effectiveness,” Esper said.

Washington is seen as pressuring Seoul to maintain the defense pact for trilateral coordination between Seoul, Washington and Tokyo as it affects US security interest in the region in the face of North Korean military threats and Chin’s increasing assertiveness.

“The only ones who will benefit from expiration of GSOMIA and continued friction between Seoul and Tokyo are Pyongyang and Beijing,” the Pentagon chief said. “That reason alone should be powerful enough for us to sit down and make sure we restore our alliance to where it was before so we can work together to respond to our common threats and challenges.”

The Seoul government gave Tokyo the required three months’ notice on Aug. 23 that it would not renew the military pact. The agreement is due to expire Nov. 23.

South Korea has maintained that it will consider reversing its decision to terminate the agreement only if Japan retracts its export restrictions on high-tech exports to South Korea and its decision to remove it from its whitelist of trusted trading partners.

The moves are seen as retaliation against South Korean Supreme Court rulings last year that ordered Japanese companies to pay compensation to South Korean victims of forced labor during Japan’s colonial rule over the Korean Peninsula.