A 25 percent US tariff on $34 billion worth of Chinese goods is set to take effect from July 6, with further duties on another $16 billion in imports from China under consideration. China has pledged to slap tariffs of the “same scale and intensity” on US imports.

President Donald Trump has threatened that Beijing’s countermoves would lead the US to impose new tariffs on an additional $200 billion in Chinese products, suggesting he could go even further.

According to a recent study by the Hyundai Research Institute, a private think tank, a 10 percent reduction in China’s exports to the US would result in cutting Korea’s shipments to China, its largest trading partner, by $28.26 billion. The sum amounts to about one-fifth of its total exports to China last year, which stood at $142.1 billion.

“Hardest hit would be intermediary goods that are used to assemble products China sends to the US market,” said Ju Won, a researcher at the HRI. 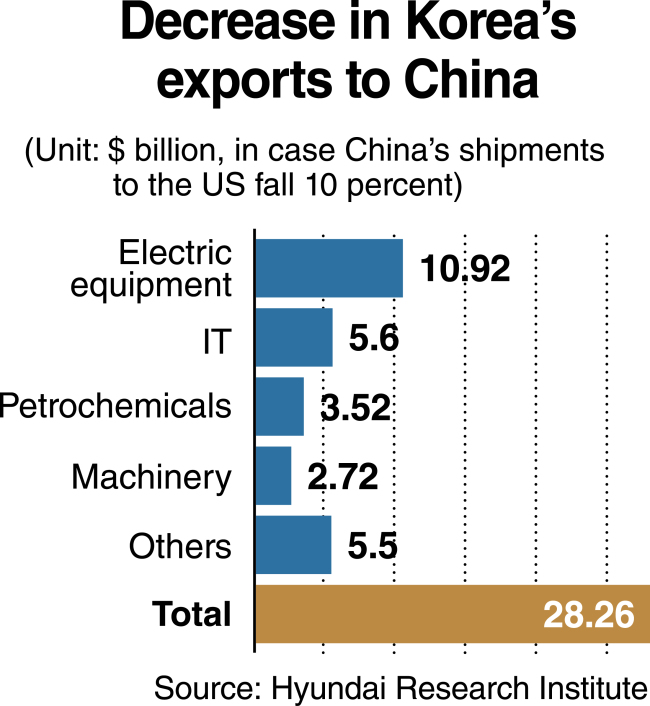 The possible fallout from the escalating trade dispute between the world’s two-largest economies comes at a time when Korea’s export growth momentum is already weakening.

The rate of on-year growth in the country’s exports dropped from 24 percent in the third quarter of last year to 5.5 percent in the April-May period of this year, according to a report released last week by the Korea Economic Research Institute. Recent government data showed Korea’s outbound shipments fell 4.8 percent from a year earlier in the first 20 days of June.

The country recorded the highest on-year increase in exports among 10 major trading powers last year, but fell to eighth place in the first quarter of this year, according to data from the World Trade Organization.

Seoul’s trade officials last week downplayed the impact of tit-for-tat measures by the US and China on Korea’s shipments to the two economic powerhouses.

Citing a study by the state-run Korea Institute for Industrial Economics and Trade, they forecast the US’ imposition of tariffs on $50 billion worth of Chinese goods would result in reducing Korea’s exports to China and its industrial output by $270 million and $640 million a year, respectively. The sums account for 0.193 percent and 0.042 percent of the totals.

China’s retaliatory measures were projected to shed $60 million and $160 million, or 0.087 percent and 0.011 percent of the totals, from Korea’s exports to the US and its industrial production.

Some observers say the US and China may find a way to defuse the escalating trade tensions between them in the coming weeks, given both are doomed to become losers in a full-fledged trade war, which would lead to dragging down global economic growth and trade.

But there are concerns that the confrontation between the US and China will turn into a war of attrition, as it has become a battle over which country will dominate the technology of the future, which they see as essential to protecting national security and boosting employment.

China appears more willing to make a deal with the US to cut the huge bilateral trade imbalance in its favor. But it is determined not to bow to the US demand to abandon its ambitious industrial policy aimed at making the country a leader in the manufacturing of advanced products by 2025.

It has yet to be seen whether Trump will make good on his threat to impose a second round of tariffs and go beyond.

If he does, China would not be positioned to retaliate in kind, as its imports from the US remained at $130.4 billion last year. China’s exports to the US amounted to $505.6 billion in 2017.

Beijing would likely resort to a set of informal reprisals, including punitive measures against American companies doing business in China, stemming a flow of free-spending Chinese tourists to the US and selling down its massive stockpile of US Treasurys.

There also are concerns that an ultimate agreement between the US and China to settle their differences would result in taking business with China from Korea and other trading powers. 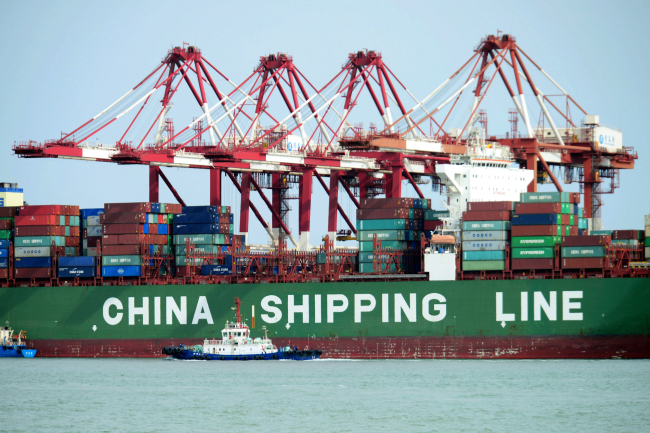 Korea depends on China and the US for nearly 40 percent of its outbound shipments. According to data from the Korea International Trade Association, about 70 percent of the country’s export goods were shipped to its 10 major trading partners last year, up from 59.7 percent in 2008.

Separate figures from government agencies showed that large companies accounted for 66.3 percent of Korea’s exports in 2017, which reached $571.4 billion, compared with 17.6 percent for small and medium-sized firms and 16.1 percent for intermediary ones.