The escalating trade battle between the U.S. and the rest of the world is raising the risk of a meaningful slowing in an otherwise vibrant American economy.

While the tariffs already in place and set to be implemented will barely dent U.S. growth, economists say the panoply of additional measures being considered would take a perceptible bite out of gross domestic product if they go ahead.

Hooper, who expects the economy to expand 3 percent this year, said the steps already taken or in the works would clip just 0.1 percentage point off GDP growth. 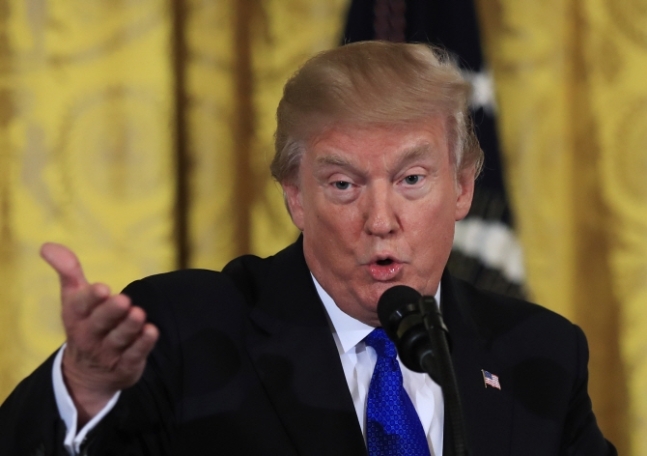 (Yonhap)
Throw in President Donald Trump’s threat to slap a 10 percent tariff on an additional $200 billion of Chinese imports and a 20 percent levy on car shipments from the European Union and the impact grows to 0.3 point to 0.4 point, he said. And the fallout could even be greater if heightened tensions begin to infect consumer, business and investor confidence.

“It really dings the economy but certainly doesn’t undermine it,” said Mark Zandi, chief economist at Moody’s Analytics Inc., who agreed with Hooper’s estimate of a roughly 0.3 percentage point impact from the accumulated trade actions.

So far the stock market seems to be taking the contretemps largely in stride, perhaps in the belief that Trump’s latest threats are more of a negotiating tactic than a concrete plan of attack.

Central bankers though are taking notice. Federal Reserve Chairman Jerome Powell said on June 20 that officials are beginning to hear that companies are postponing investment and hiring due to uncertainty about what comes next.

“Changes in trade policy could cause us to have to question the outlook,” he said during a panel discussion at a European Central Bank conference in Portugal.

The increasing tariff strife poses particular problems for the central bank because it’s likely to both raise inflation and depress growth.

Trump administration officials have played down the economic impact of the trade battle.

“Anyone who thinks the economy is being wrecked doesn’t know what they’re talking about,” Commerce Secretary Wilbur Ross said in a June 21 Bloomberg Television interview.

The worsening trade friction comes at a time when the U.S. economy is, in the words of Powell, “performing very well.”

Growth in the second quarter is on track to clock in at 4.5 percent, according to IHS Markit’s Macroeconomic Advisers, as tax cuts power both consumer and company spending. That would be the strongest in almost four years and twice as fast as the first quarter’s annualized advance of 2.2 percent.

The tariffs though will put a crimp in activity going forward by raising costs for households and businesses.

“It’s starting to chip away at the tax cut,” said Nariman Behravesh, chief economist at IHS Markit. “If they keep down this path, all the positive effects of the tax cut will be gone.”

Thanks in part to the tax cuts, the U.S. does look to be in better shape than its trading rivals to weather any fallout.

“The U.S. can afford a trade war relatively more than Europe, China” and other countries because its economy is more domestically driven, said Christian Keller, head of economic research for Barclays Plc.

Exports amounted to almost 12 percent of U.S. GDP in 2016, compared with close to 20 percent for China and 43 percent for the EU, World Bank data show.

While China has policy levers it can pull to try to offset the impact from trade struggles, Europe is more vulnerable, Zandi said. The ECB’s benchmark interest rate is already at zero.

Of course, Europe’s troubles could redound back on the U.S. if the euro weakens against the dollar, as seems likely, he said.

It “would be a tipping point” for the global economy if Trump goes ahead with tariffs on $200 billion more of Chinese goods and a 25 percent tax on all car imports, said Ellen Zentner, chief U.S. economist for Morgan Stanley. (Bloomberg)