[ The Korea Herald – Send E-mail ]
US ups pressure on NK in carrot-and-stick approach
By Ock Hyun-ju
Published : Jun 24, 2018 - 16:01
Updated : Jun 24, 2018 - 18:53
The extension of economic sanctions against North Korea being coupled with the suspension of further South Korea-US joint military drills hints at US President Donald Trump’s message to the regime, experts say.

On Friday, Trump renewed sanctions on North Korea for a year in an executive order, saying the country poses an “extraordinary threat,” just 10 days after saying there was no nuclear risk from Pyongyang. 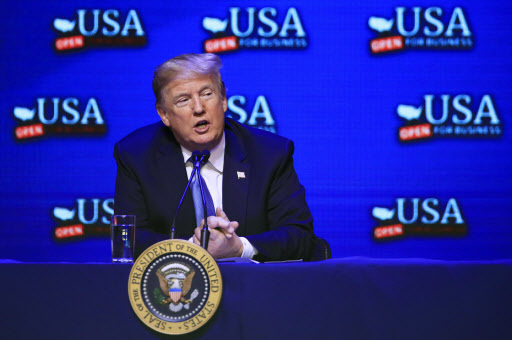 US President Donald Trump (Yonhap)
The state of national emergency over the threat posed by North Korea’s nuclear arsenal was first imposed by former President George W. Bush in 2008, and has routinely been renewed by US presidents since.

The extension appears to reaffirm the US position that sanctions will remain until denuclearization is achieved, despite Pyongyang and Washington engaging in negotiations to rid the Korean Peninsula of nuclear weapons programs.

The allies have already announced that they will suspend the annual Freedom Guardian, large-scale exercises that had been planned for August, while talks with North Korea are underway “in good faith.”

The suspension of the drills, which Trump referred to as expensive and provocative, is seen as a major concession from the US. Despite North Korea’s claims that the drills are rehearsals for war, the allies have maintained the joint exercises are defensive in nature, and central to their security alliance.

In a joint statement signed at a June 12 summit in Singapore between Trump and North Korean leader Kim Jong-un, North Korea pledged work towards “complete denuclearization of the Korean Peninsula” and the US pledged to offer “security guarantees” to the reclusive country, which has been criticized for lacking details such as a time frame for action.

The carrot-and-stick approach may be part of Trump’s efforts to urge Kim to take concrete steps toward denuclearize ahead of follow-up negotiations, as Trump struggles to defend the outcome of the historic summit as a “success” at home, experts say.

US Secretary of State Mike Pompeo will be meeting with North Korean officials at the earliest possible date to try to implement the outcomes of the summit, his spokesperson Heather Nauert said Thursday.

“I think Trump is betting big on North Korea as there is not much Trump alone can give to North Korea in return for the country’s denuclearization,” said Park Won-gon, a professor at Handong Global University, referring to sanctions that cannot be lifted without approval from the US Congress and United Nations Security Council.

“The suspension of joint military drills is Trump’s message to North Korea that that the country can get rewards and security guarantees corresponding with its bold, concrete action to abandon nuclear arsenal.”

Trump’s stepped-up pressure on North Korea also comes as it is seen getting ever closer to its communist neighbor China, its economic lifeline that accounts for more than 90 percent of North Korea’s trade.

Only one week after his historic summit with Trump, Kim traveled to Beijing last week for his third meeting with Chinese President Xi Jinping in less than three months, which analysts view as Kim’s attempt to strengthen his negotiating leverage against the US.

China, which is embroiled in conflict with the US over trade, has been a key player in enforcing sanctions against North Korea. Its participation in the sanctions regime resulted in pressuring cash-strapped Pyongyang to return to the negotiating table and engage in a flurry of diplomatic overtures, analysts say.

“I think North Korea’s recently strengthening ties with China has also had an impact on Trump ramping up pressure on North Korea,” Park said.