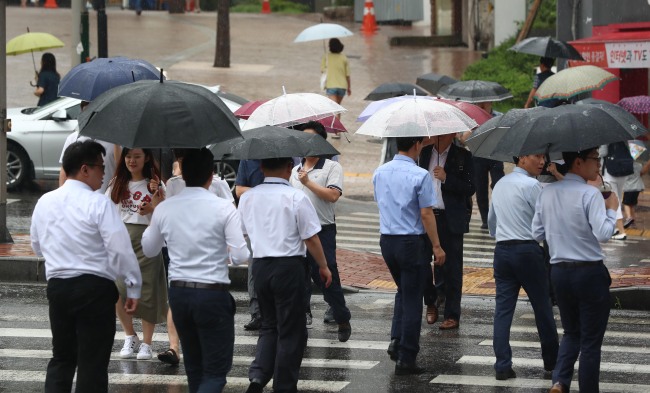 South Korean office workers cross a road in rainy Seoul. (photo credit: Yonhap)
South Koreans work the second-longest hours among member states of the Organization for Economic Cooperation and Development for wages below the average of 35 nations, data showed Wednesday.

According to the annual OECD Employment Outlook 2017, employees here worked an average of 2,069 hours last year, compared to the OECD average of 1,764 hours. The figure includes part-time workers and those who work for part of the year, as well as full-time employees.

Mexicans worked the most, with average working hours of 2,255 last year, the data showed.

Workers in Germany had the shortest working hours at 1363 hours, which was 706 hours less than Koreans. However, they earned an hourly real wage of $34, more than twice the Korean average.

Luxembourg had the highest real wage per hour on average at $41.4.