"The ministry will work to minimize non-regular jobs that are insecure and make sure the positions in the public sector that deal with the safety of our people are full-time based," Minister of Employment and Labor Kim Young-joo said in an inauguration speech released by the ministry. 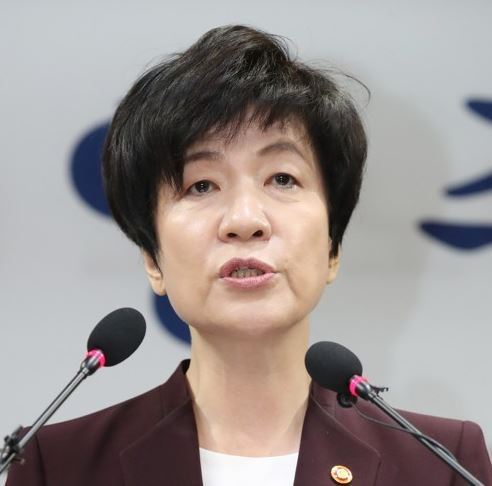 Labor minister Kim Young-joo delivers a speech during her inauguration ceremony in Seoul on Aug. 14, 2017. (Yonhap)
The basketball player-turned-activist is a three-term lawmaker who spent most of her political career focusing on gender equality in employment and workplaces.

On her first day at office, Kim vowed to bring a better system for non-regular workers including temp positions and contracted workers.

"I will ensure there is no discrimination against some 6 million non-regular workers who have been mistreated and feel insecure about their jobs."

One of her achievements includes the adoption of a revised bill that requires companies to reveal information about chemicals they import, manufacture and transfer. It came after a deadly humidifier disinfectant killed some 70 people who used the product to clean up the household appliance.

"The ministry will disclose the data related to safety and sanitation to prevent the recurrence of another tragedy like the humidifier incident."

Spurning concerns that her policies will only work in favor of the labor sector, she stressed that she will take a balanced and fair approach in carrying out initiatives.

She also asked her officials "not to be afraid of breaking the mold" and find the best way to improve rights and interests of laborers, the ministry said. (Yonhap)