[ The Korea Herald – Send E-mail ]
[News focus] Ban on texting after-hours orders, will it work?
By Jo He-rim
Published : Aug 9, 2017 - 18:03
Updated : Aug 9, 2017 - 18:10
Lawmakers are moving to introduce a new law that would ban employers from sending work-related messages outside work hours, amid rising calls to protect the right to disconnect from work.

Recently, two bills have been recently submitted to the National Assembly, both intending to revise the labor law to stop employers and managers from giving work-related orders, directly and indirectly via mobile messengers, phone calls and other forms of social network services.

“Many South Koreans complain of a stressful work environment, saying they are on call 24 hours a day because of work-related messages popping up any time after office hours,” said Rep. Lee Yong-ho of the minor opposition People’s Party who led the drafting of one of the two bills. The other bill was proposed by Rep. Son Kum-ju of the same party.

“It does not matter whether such acts are done by a senior to a junior worker or a junior to a senior worker. We need to change the practices of bothering each other after work hours,” Rep. Lee said.

With more than 90 percent of the population having smartphones -- one of the highest penetration rates in the world -- and the onerous working conditions with the longest working hours among the Organization for Economic Cooperation and Development countries, complaints are mounting among employees over the extra work they receive via social network services. 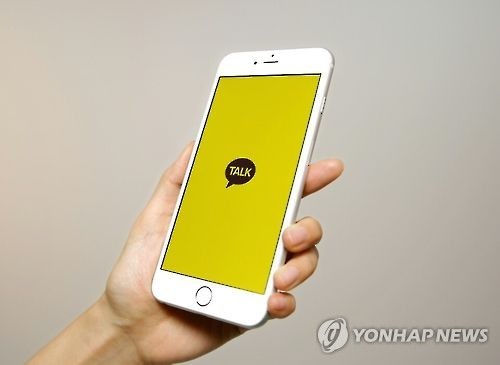 Kakaotalk, mobile messenger (Yonhap)
“When something occurs on weekends, I would get messages from my bosses directing me to do something about it,” Sally Chang, a 26-year-old office worker told The Korea Herald.

“I was so frustrated once on a Sunday, because they would keep texting me on KakaoTalk. I had to hang onto my phone all day and wait to see if they want me to come to the workplace to fix things.” KakaoTalk is a mobile messenger app which counts 42 million of South Korea’s 51.4 million population as its subscribers.

A secretary working for a lawmaker at the National Assembly was criticized by her boss when she could not be reached via her smartphone on a Saturday.

“I was at the hospital when they called and messaged on a Saturday when it is the only time I can go during their open hours,” the 30-year-old who refused to give her name said. “I do not think it should be regarded as normal for bosses to think that employees should take their calls anytime, anywhere. It is sad that a legislative measure has to come in to enforce what should be social etiquette.”

As she explained that the parliament is a workplace with frequent overtime working, she had doubts about whether the legislative proposals would really become law.

“I will watch whether the lawmakers who motioned the bills follow the law, (if they are enacted).”

According to a report by the Korea Chamber of Commerce and Industry conducted last year, 74 percent of 1,000 employees from 500 companies said they received work orders and requests after office hours and, among them, 60 percent said they suffer from serious stress levels.

A separate 2015 report by the Korea Labor Institute revealed that the average amount of time a person spends using a smartphone for extra work is 11.3 hours per week. It surveyed 2,402 laborers in the manufacturing and service industry.

The idea of prohibiting contact to employees via social media networks after regular work hours is not new.

Rep. Shin Kyoung-min of the ruling Democratic Party of Korea proposed a bill last June. The bill has since been sitting idle at the parliamentary labor committee.

The idea was also picked up by President Moon Jae-in and Yoo Seong-min of splinter conservative Bareun Party when they were presidential candidates for the May 9 election.

Compared to the previous bill by Rep. Shin, the new bills of the two People’s Party lawmakers managed to expand the discussion to implementation.

Rep. Lee suggests the company pay over half of the normal salary when it violates the law to give extra work orders, counting it as overtime work, while Rep. Son’s proposal seeks to impose a fee upon the companies when violations occur.

While the public sentiment appears to be positive, many say the plans are unrealistic in a country where workers are still putting in extra hours without being paid and the statutory 52-hour workweek is not strictly enforced. In fact, the biggest issue in labor now is whether to plug a regulatory loophole that has allowed the extension of the weekly work limit to 68 hours.

“It would be too difficult for the company to systematically and transparently give us overtime allowance for receiving a message or an email. The solution to the problem is to really respect the right to disconnect from work and replenish,” an office worker surnamed Kang in Gwanghwamun, Seoul said.

Rep. Shin echoed this opinion, explaining that it is too difficult to set an objective standard on how such messages can be quantified and converted into extra work and how the company can compensate the extra time financially.

While receiving both support and criticism, his bill from last year is still pending at the parliamentary committee for environment and labor, after it had been disputed on its viability.

“That is why I believe that such a ban should first come as an administrative guidance, rather than an empty piece of legislation. The Labor Ministry also sees it the same way,” the two-term lawmaker added.

The Ministry of Employment and Labor on Thursday revealed that it was looking into ways to improve working conditions, specifically by limiting the use of social network services to give work orders to employees after work. The ministry is also studying overseas cases in France and Germany.

“The working environment and ethic between Korea and European countries are very different. For us, we should take it step by step to change the grueling work ethic in this country,” Rep. Shin said.