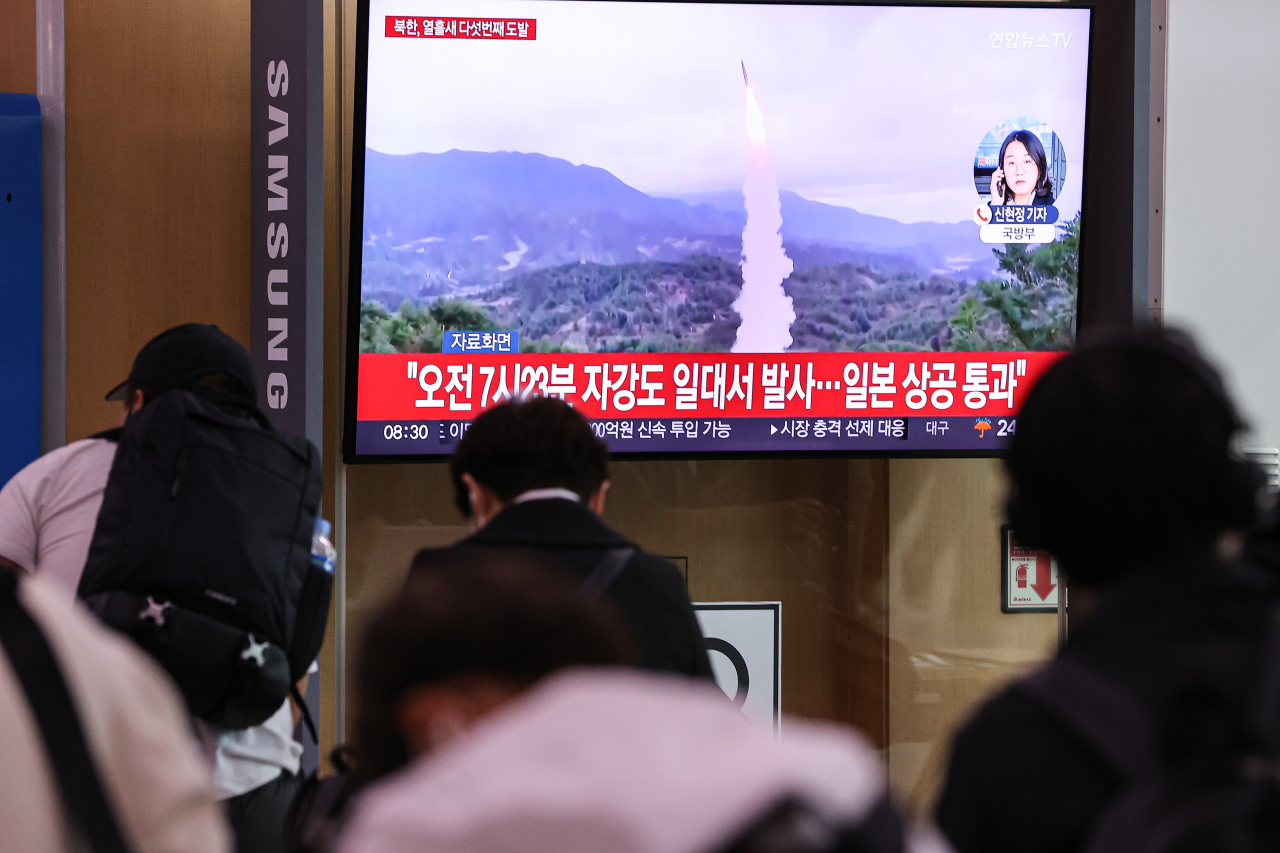 Passersby watch a TV report of North Korea`s missile launch at Seoul Station on Tuesday. (Yonhap)
North Korea on Tuesday fired an intermediate-range ballistic missile over Japan for the first time in five years, marking its fifth launch in 10 days. In response, the air forces of South Korea and the US conducted a strike drill Tuesday afternoon as a show of force.

The South Korean military detected an intermediate-range ballistic missile, or IRBM, being fired from Mupyong-ri in the northern province of Chagang eastward at 7:23 a.m. on Tuesday, the Joint Chiefs of Staff said.

A North Korean ballistic missile flew over Japan for the first time since September 2017, when the country launched a Hwasong-12 missile over the northern Japanese island of Hokkaido.

The missile flew about 4,500 kilometers at a speed of around Mach 17 and at an altitude of 970 kilometers, the JCS said, adding that South Korean and US intelligence authorities are analyzing the specifications.

Japan’s Chief Cabinet Secretary Hirokazu Matsuno said the missile was launched at 7:22 a.m. and was presumed to have landed in the Pacific Ocean outside of Japan’s exclusive economic zone at 7:44 a.m. But the South Korean military did not confirm the flight time.

The South Korean military views that North Korea was presumed to have launched a Hwasong-12 IRBM at normal ballistic missile trajectory in light of specifications confirmed by South Korea and the US, according to military sources, who requested to remain anonymous.

The last time North Korea launched a Hwasong-12 nuclear-capable missile was in January. At that time, the missile flew around 800 km at an altitude of 2,000 km and at a maximum speed of Mach 16.

Countermove by S.Korea, US, Japan
South Korean President Yoon Suk-yeol on Tuesday ordered to “sternly respond” to the missile launch and “push corresponding measures forward in coordination with the US and the international community,” according to the presidential office.

Kim also discussed countermeasures to the missile launch by holding separate phone discussions with US National Security Adviser Jake Sullivan and Secretary General Akiba Takeo of the National Security Secretariat of Japan in the morning, according to Lee Jae-myeong, deputy spokesperson for the presidential office.

The three security advisers committed to “decisively responding to North Korea’s repeated provocations in close coordination between South Korea and the US as well as among South Korea, the US and Japan and strengthen cooperation with the international community to explore various ways to deter North Korea.”

In addition, four South Korean Air Force F-15K fighter jets flew with four F-16 Fighting Falcons from the US Air Force forming a strike package on Tuesday afternoon in a show of force against North Korea.

A F-15K fighter jet fired two air-to-ground joint direct attack munitions at a target on Jikdo, an island off the west coast, to demonstrate its precision strike capabilities.

“South Korea and the US demonstrated their will to sternly respond to any kind of North Korean provocation, ability to precisely strike the origin of provocation with the alliance’s overwhelming military forces and readiness posture to punish,”  South Korea’s JCS explained the significance of the combined airstrike package flight and “precision bombing drill.” 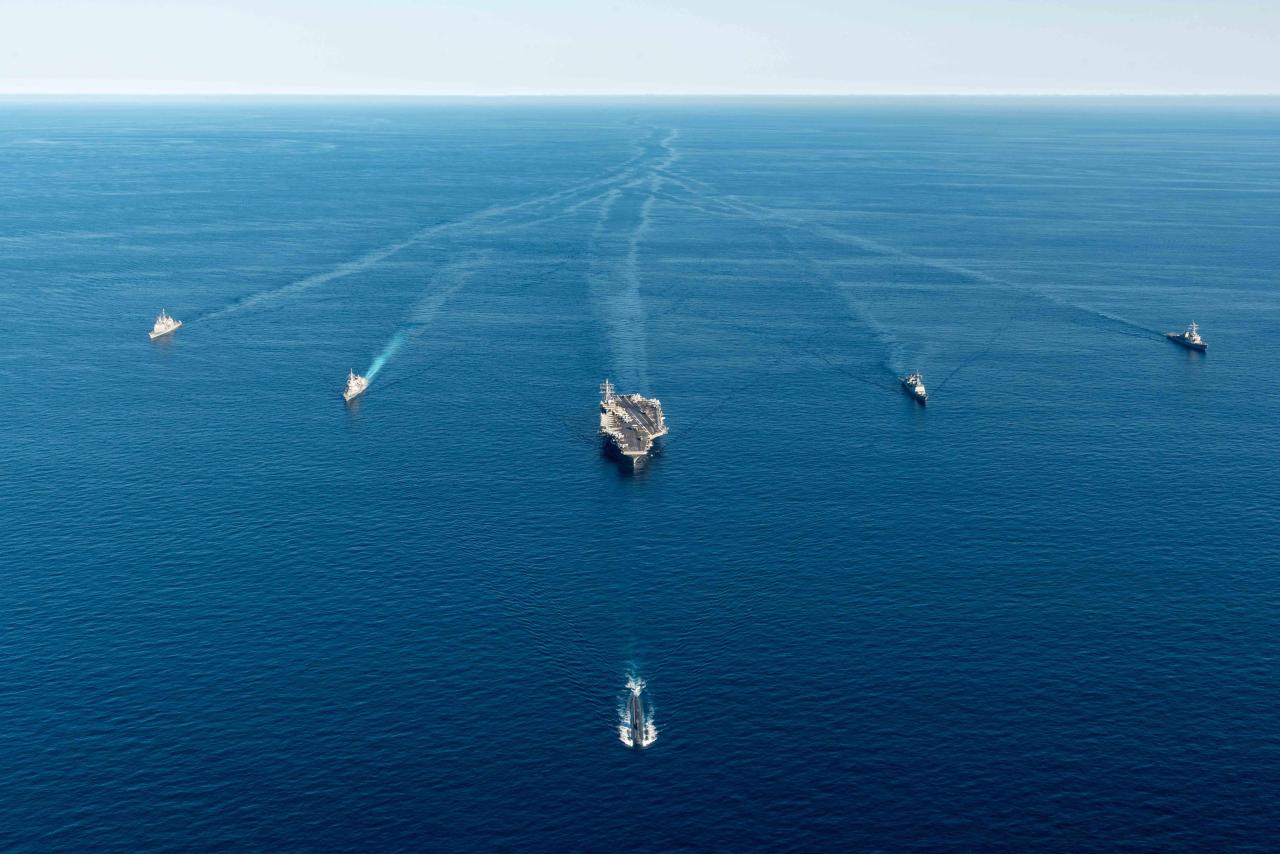 This photo, provided by the South Korean Navy, shows naval ships, including the USS Ronald Reagan aircraft carrier, participating in a joint anti-submarine drill between South Korea, the United States and Japan in the East Sea on Sept. 30, 2022.
Strike capabilities against key US military bases
Seoul-based experts said North Korea intended to demonstrate its capabilities to strike the key military targets in the Indo-Pacific region in response to the recent bilateral and trilateral maritime drills staged on and near the Korean Peninsula that aimed to strengthen combined capabilities to counter mounting threats from North Korea.

Kim Dong-yub, a professor at the University of North Korean Studies in Seoul, said North Korea would seek to demonstrate its capabilities to strike key US military bases on Guam if the country fired a Hwasong-12 IRBM. The US strategic assets, including nuclear-powered fast attack submarines and B-52 nuclear-capable bombers, are conspicuously deployed at Naval Base Guam and Andersen Air Force Base.

Pyongyang also has a history of threatening “enveloping fire” around Guam with Hwasong-12 missiles in 2017.

“North Korea showed the capabilities to target Guam where most of the US strategic assets -- which are deployed on the peninsula -- are based,” Kim said, explaining that the distance from the launch site in North Korea's Chagang Province to the US military bases on Guam is around 3,500 kilometers.

Against the backdrop, the latest missile launch would be North Korea’s tit-for-tat to the recent move by South Korea and the US to reinforce the deployment of US strategic assets on the peninsula.

The spate of missile launches came after the USS Ronald Reagan, a 100,000-metric ton nuclear-powered supercarrier, arrived at a naval base in Busan on Sept. 23 for the first time since 2017. The USS Ronald Reagan engaged in bilateral and trilateral naval drills with South Korea and Japan on and near the Korean Peninsula last week.

“In this sense, the missile firing would be North Korea’s continuing backlash against and countermove to the deployment of the US strategic asset on the Korean Peninsula,” Kim said.

But Kim also braced for the possibility of North Korea firing a Hwasong-15 or Hwasong-17 intercontinental ballistic missile because of technical necessities such as securing atmospheric reentry technology.

Message of warning
Hong Min, director of the North Korean Research Division at the government-funded Korea Institute for National Unification, said, “North Korea fired the deployed and operational Hwasong-12 missile in a tit-for-tat response against the recent trilateral military exercise among South Korea, the US and Japan.”

South Korea, the US and Japan staged an anti-submarine warfare exercise for the first time in five years in international waters of the East Sea on Sept. 30. In response, North Korea sought to prove its strike capabilities against key targets in the Indo-Pacific, where the trilateral exercises have generally been conducted, by launching its operational IRBM.

North Korean state media previously said the test-firing was aimed to confirm “the accuracy, security and effectiveness of the operation of the Hwasong 12-type weapon system under production.”

“North Korea sought to send a message of warning by demonstrating its capabilities to retaliate and punish in response to drills conducted by South Korea, the US and Japan that intend to enhance combined capabilities to counter North Korea,” Hong said.

Hong elucidated that North Korea would seek to show its capabilities to strike key targets in Guam and Japan, including the US Navy’s forward-deployed 7th Fleet, and to “illustrate the strategic role of Hwasong-12 missiles in contingency or wartime scenarios,” including reinforcing US military bases in the region.

Park Won-gon, a professor in the department of North Korean studies at Ewha Womans University, said the recent spate of missile launches could suggest North Korea’s return to a cycle of “missile provocations” after the country temporarily had suspended missile launches in the wake of COVID-19.

“Today’s launch is assessed to focus on enhancing nuclear capabilities, while the previous four missile launches primarily aim to counteract against the South Korea-US bilateral drills and the South Korea-US-Japan trilateral exercise that mobilized the US aircraft carrier,” Park said. “Therefore, we cannot rule out the possibility that the launch will lead to ICBM and SLBM launches and a seventh nuclear test.”

Hong said that North Korea’s intention behind the launch is that “it will take measures corresponding to action by South Korea, the US and Japan based on (its pronounced principle) of strength-for-strength.”