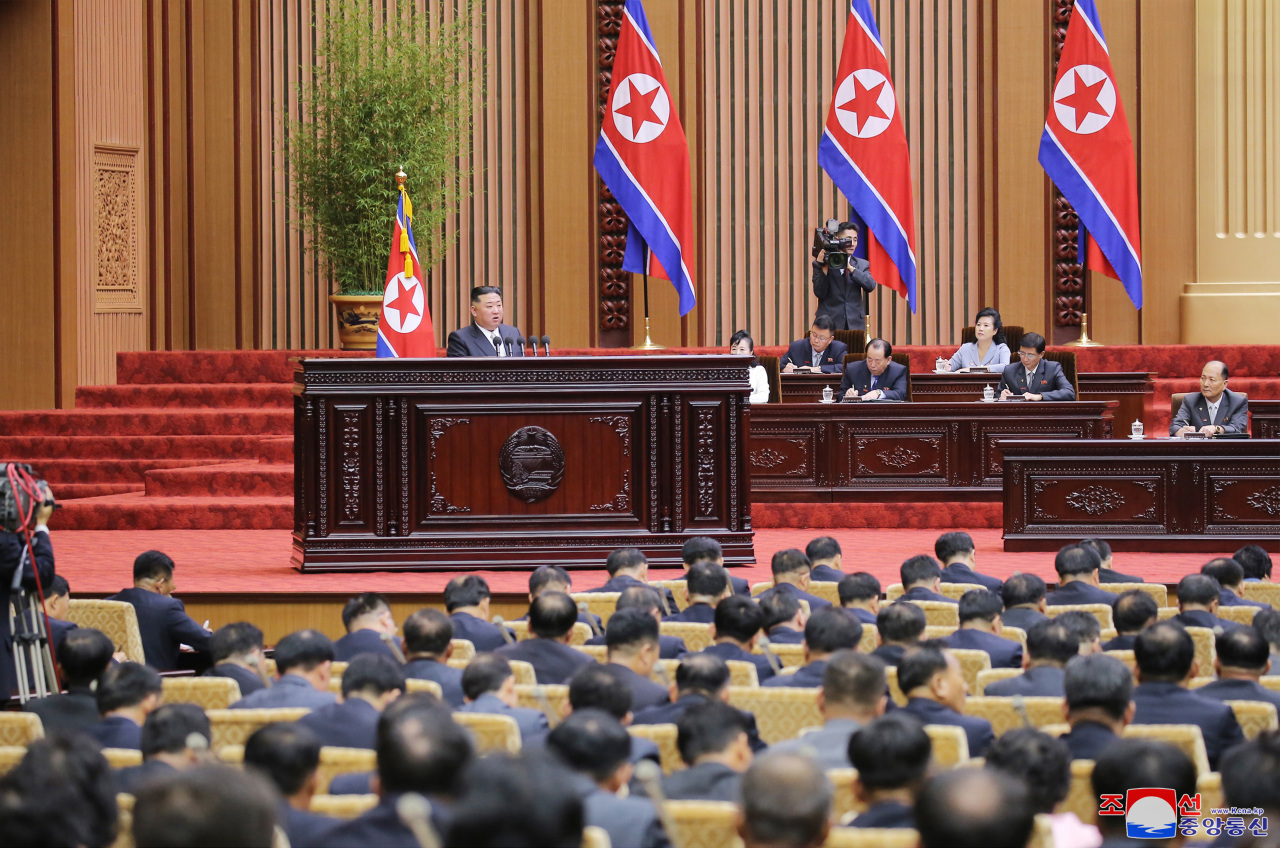 North Korean leader Kim Jong-un delivers a speech at the second-day session of the Supreme People`s Assembly in Pyongyang on Sept. 8, 2022, in this photo released by the Korean Central News Agency the following day. (Yonhap)
North Korea’s propaganda outlets have continued to dismiss South Korea and the US’ move to reinforce their deterrence and military readiness as “bravado” against a “nuclear weapons state,” arguing that North Korea merely sees a US aircraft carrier as a “lump of scrap metal.”

Multiple propaganda outlets have simultaneously launched a flurry of attacks on the Yoon Suk-yeol government’s defense strategy to reinforce the South Korea-US combined defense posture and enhance the viability of the US extended deterrence against mounting threats from North Korea.

The recent spate of blistering criticisms came after South Korea and the US conducted large-scale combined naval drills from Sept. 26 to 29 in the East Sea operational area, called the Korea Theater of Operations.

The US Navy’s nuclear-powered aircraft carrier USS Ronald Reagan and its carrier strike group joined the exercises. The bilateral naval drills involving a US aircraft carrier were staged in South Korean waters for the first time since November 2017.

Uriminzokkiri denounced the Yoon government for being “frantic about the reckless rehearsal for war against the DPRK while clinging tenaciously to the nuclear devil,” referring to the US. The DPRK is North Korea’s official name.

“The warmongers, who have frantically waged a reckless war rehearsal racket against the DPRK, are clamoring about the ‘power of the alliance,’ but in fact, it is only the pitiful bravado of those who are frightened by our military might.”

Meari, another North Korean mouthpiece, argued Monday that the Yoon government has been “going completely insane about confronting a nuclear weapon state while having the ‘crumbling empire’ at its back.” The media outlet called the Yoon government “moronic.”

“The problem is that the traitorous Yoon Suk-yeol group is … completely clueless about what strategic position the DPRK has reached, and what kind of disastrous consequences its reckless behavior -- which it has made relying on its master (the US) -- will bring,” the Meari said. “Only the curse of the nation and shameful destruction will befall the traitorous group.”

North Korea’s Uriminzokkiri on Sunday played down the South Korea-US alliance’s efforts to enhance the viability of the US’ extended deterrence through various channels, including the deployment of the US’ strategic assets on the peninsula.

Uriminzokkiri said North Korea “will never be surprised even though the (South Korean) puppets bring all the US’ nuclear weapons” to the peninsula.

“The puppet warmongers, who engage in nuclear war saber-rattling against us, who view ‘floating military bases’ as a mere lump of scrap metal, are such morons…” the media outlet said.

Tongil Sinbo, a North Korean weekly, said Saturday that the Yoon government’s initiative to enhance the viability of the US’ extended deterrence as “self-destructive braveness.”

“The traitorous group should clearly understand that the behavior of confronting fellow countrymen with absolute power by referring to extended deterrence is a foolish act (like) jumping into a fire with gunpowder,” the Tongil Sinbo said, urging the Yoon government not to act rashly.

North Korea’s dismissal conspicuously came after the country fired a flurry of ballistic missiles in unusually short intervals last week at a sensitive time when the US aircraft carrier engaged in bilateral and trilateral naval drills with South Korea and Japan on and near the Korean Peninsula.

The spate of missile launches in a week seems to be an apparent tit-for-tat action against the alliance’s move to reinforce their deterrence and defense posture against North Korea.

But North Korea’s recent military action was the first time it has fired ballistic missiles at a time when a US nuclear-powered aircraft was deployed on the Korean Peninsula.

Kwon explained that North Korea seems to be seeking to concurrently “gain the upper hand in handling Korean Peninsula affairs and advance its weapons systems.” The minister added that another goal could be to “grab the US’ attention,” as North Korean issues have been relegated to a lower priority in Washington behind other domestic political issues.