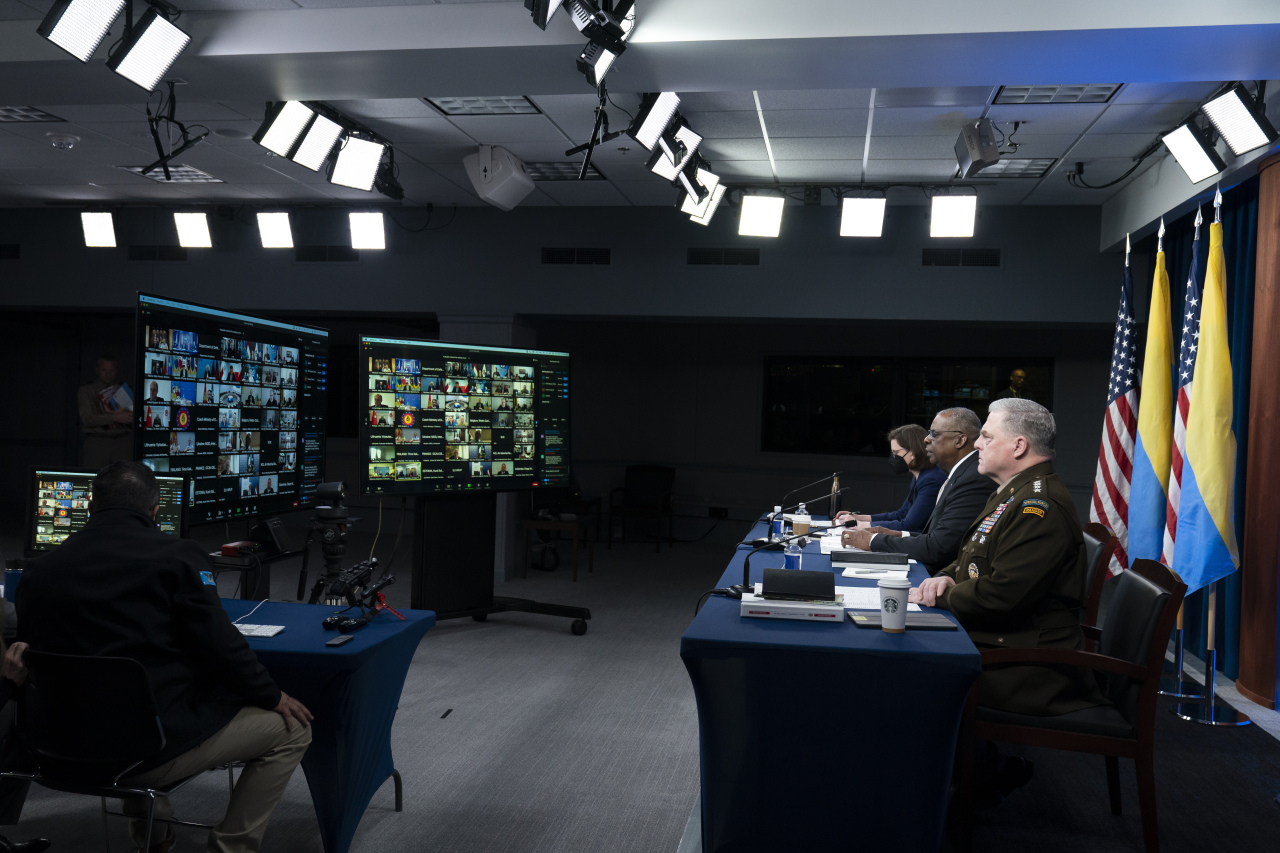 US Secretary of Defense Lloyd Austin (center), Chairman of the Joint Chiefs of Staff Gen. Mark Milley and Deputy Assistant Secretary of Defense for Russian, Ukrainian and Eurasian affairs Laura Cooper participates in the US-hosted virtual meeting of the Ukraine Defense Contact Group at the Pentagon in Washington DC on Monday. (AP)
South Korea’s Defense Ministry committed to seeking ways to step up support for Ukraine at the US-led defense dialogue while taking a cautious stance over providing lethal weapons to the war-torn country.

The group was first established by the Pentagon in April to hold monthly meetings in a bid to coordinate ways to help Ukraine defend itself from the Russian invasion.

South Korea has strongly condemned Russia’s invasion of Ukraine as an act that violates the principle of the UN charter, Shin said, and went on to explain the government-level efforts to support Ukraine in the second session.

Seoul has provided $40 million in humanitarian assistance and delivered around 3 billion won ($2.37 million) worth of nonlethal military items including helmets, bulletproof vests and combat rations to Ukraine, according to the Defense Ministry.

Shin also pledged to come up with measures to step up support for Ukraine at the US-hosted defense dialogue.

“Vice Minister Shin also underscored that we (South Korea) will explore ways to make additional contributions in light of our responsibility and role in the international community as a global pivotal country,” the Defense Ministry said in the statement.

A total of 47 countries, including South Korea, Japan and NATO and EU member countries, participated in the three-hour virtual meeting comprising three sessions.

During the second meeting, the representatives were debriefed on Ukraine’s immediate combat requirements and a battlefield update, shared information on each participating country’s donations to Ukraine, and coordinated ways to meet Ukraine’s priority requirements, according to video footage of the meeting provided by the US Defense Department.

Reservations about lethal aid
Specifically, South Korea’s Defense Ministry has pushed for the plan to “expeditiously provide military supplies” for Ukraine considering the country’s situation, Col. Moon Hong-sik, deputy spokesperson of the Defense Ministry, said on Tuesday during a regular press briefing. Moon added that the ministry has been discussing a specific timeframe with concerned countries.

But the Defense Ministry declined to answer when asked by The Korea Herald if the Yoon Suk-yeol government is considering sending Ukraine any lethal weapons.

“Our stance is that the provision of lethal weapons to Ukraine requires careful considerations,” Moon told the press briefing. “But in view of our country’s international status and role, we will always cooperate with related countries and make efforts to hold our end up.”

South Korea Foreign Minister Park Jin admitted Friday that the US and South Korea were discussing military assistance to Ukraine in the run-up to the summit, where the US was expected to ask the Yoon government to offer arms packages.

While the Yoon government has reservations about lethal aid, Austin said Monday that the US and other participant countries pledged to intensify their efforts to arm Ukraine with weapons at the meeting of the Ukraine Defense Contact Group.

“Moving forward we’ll continue to deepen our coordination and cooperation so that Ukraine can sustain and strengthen its battlefield operations,” he told reporters during a news conference following the meeting.

Austin explained some 20 countries “announced new security assistance packages at the meeting and many countries are donating critically needed artillery ammunition and coastal defense systems and tanks and other armored vehicles.” Other participating countries promised to train Ukraine’s forces and sustain military systems.

The US defense chief also announced an in-person meeting of the Ukraine Defense Contact Group will be held on June 15 on the sidelines of the NATO defense ministerial in Brussels. The South Korean Defense Ministry told The Korea Herald that it is to review whether it will attend the meeting.