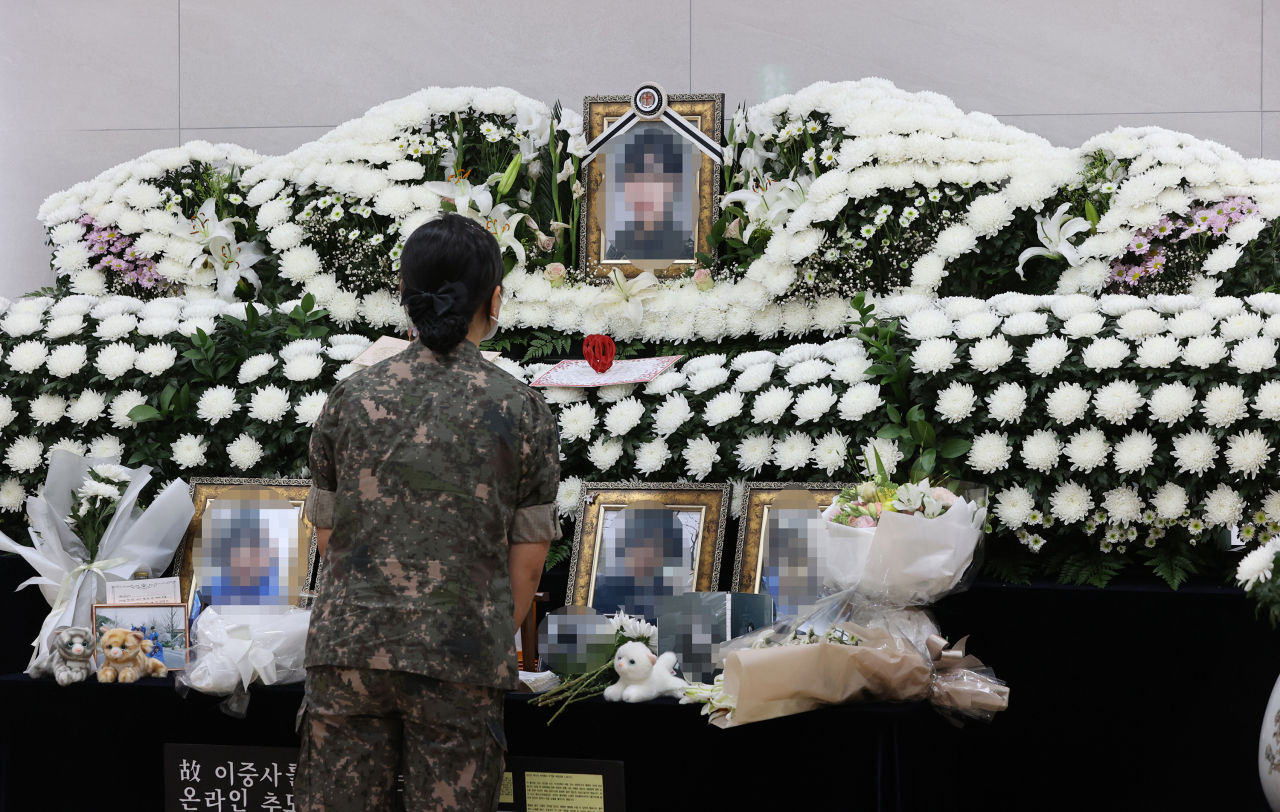 A service member mourns at a memorial altar last Friday, for a noncommissioned officer who took her own life after being sexually harassed by a colleague. (Yonhap)
Defense ministry investigators raided the offices of the Air Force's legal affairs department Wednesday over the suicide of a sexually harassed noncommissioned officer as part of a sprawling investigation into what led the victim to take her own life.

The raid took place one day after the prosecutors grilled a military public defender accused of failing to provide adequate help to the master sergeant, surnamed Lee, who allegedly suffered groping and other abuse by her colleague during a car ride back to their unit after a drinking session in March.

The bereaved family filed a complaint against the public defender last week on charges of dereliction of duty, saying the lawyer did not take due steps for the victim, only making a few phone calls and sending text messages without a single face-to-face meeting.

The Air Force's legal affairs department oversees its own prosecution team, and the accused lawyer is also a member of the bureau.

"The defense ministry is executing the seizure and search warrant at the legal affairs bureau under the Air Force headquarters to investigate the 20th Fighter Wing prosecution's alleged poor initial probe into the case and the public defender's suspected leakage of victim's personal information," it said in a statement.

The case was referred to the ministry earlier this month following intense public outrage over suspicions the Air Force tried to cover up the incident.

The suspect in the latest abuse was arrested earlier this month, only after the victim took her own life in May and the case became known to the media.

In the face of simmering criticism for its failure to protect the sexual violence victim, the defense ministry extended a special reporting period for such cases for another two weeks.

The ministry launched the campaign earlier this month to find and protect victims who have not been able to report their suffering.

During the period set to continue through June 30, service members who suffered or witnessed sexual abuse can report it via a phone call, email or an anonymous bulletin board on a defense ministry website.

"We will do our best to protect victims and to revamp the barracks culture to prevent any such cases from going unreported," a ministry official said. (Yonhap)