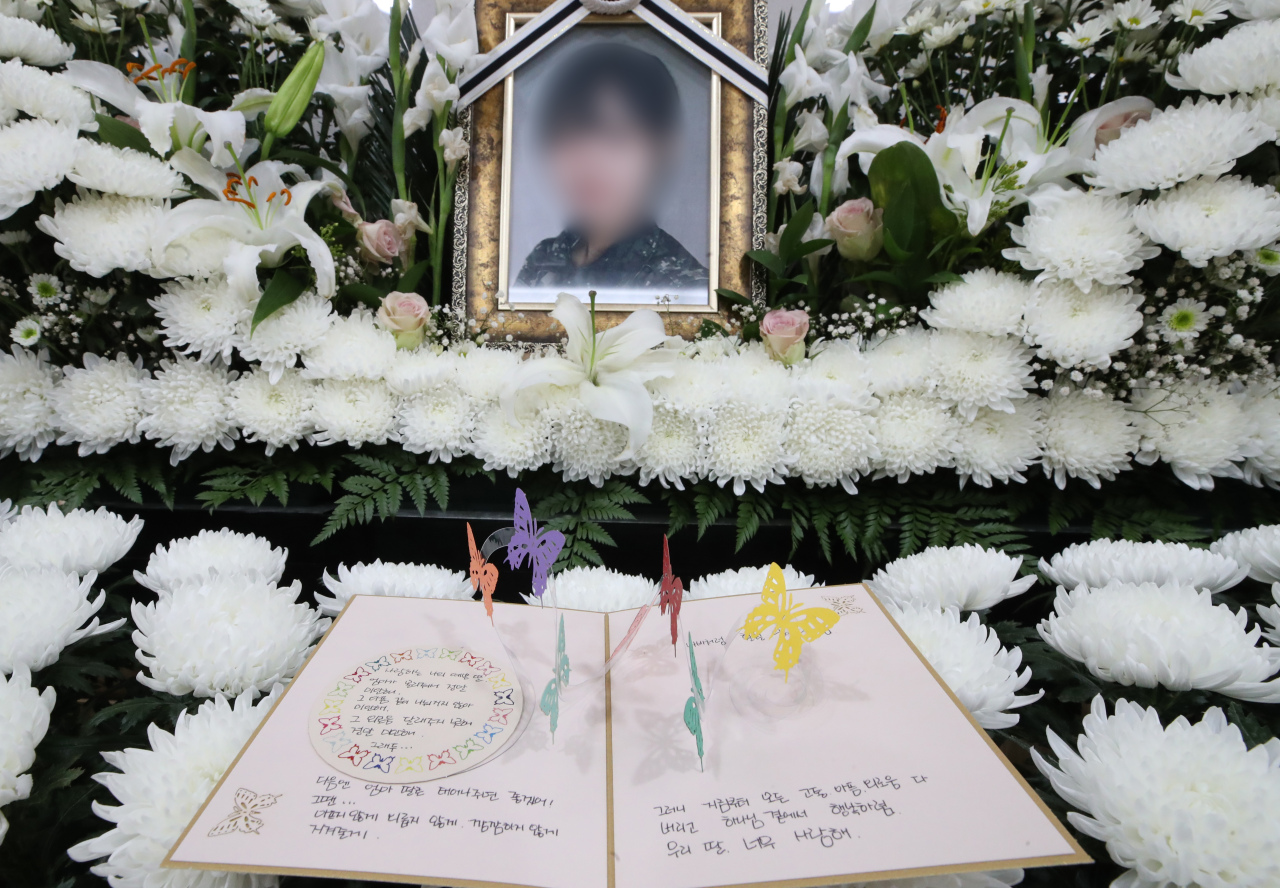 A funeral altar at the Armed Forces Capital Hospital in Seongnam, Gyeonggi Province, is set up to commemorate an Air Force master sergeant who reported a sexual assault in March before taking her own life in May. (Yonhap)
An interim report on the suicide of an Air Force master sergeant who took her life after being sexually assaulted is coming out as early as next week, a senior official at the Ministry of National Defense said Tuesday.

The master sergeant died by suicide in late May after a complaint she filed in early March went unanswered. The Defense Ministry is leading a full investigation into her death and the alleged cover-ups.

“Given everything going on, we could release an interim report on the probe next week or the week after,” the official said, referring to the fact that the ministry would have to report it first to an independent committee comprising civilian expert advisers.

The panel, set up by the ministry to ensure military prosecution teams carry out a thorough probe to identify those involved in the cover-up, meets weekly to oversee the military investigation, the official said, adding that the investigation is as transparent as it could possibly be.

The official said the ministry had recently brought in three service members from the 20th Fighter Wing base and seven from the 15th Fighter Wing base. The victim transferred voluntarily to the 15th after she filed her complaint. Commanders at the two bases are accused of failing to take the complaint seriously.

At the same time, the ministry is looking into communication records it seized from raids of the prosecutors’ offices at the 20th Fighter Wing base and the Air Force headquarters, and military offices at those two bases, according to the official.

The ministry, which is also looking at records retrieved from the military’s central data center to build a timeline that could show how the victim’s complaint was handled by each person along the chain of command, is sifting through evidence to establish criminal responsibility, the official said.

On the sidelines, he said the ministry had assembled an internal inspection team, which brought in at least 100 service members from the 20th and 15th Fighter Wing bases and the Air Force headquarters. The team explored whether service members had dealt with the complaint as they were instructed.

The ministry, he said, will press charges against anyone found to have violated the requirement to report sexual violence up the chain of command on time and in detail, without revealing the victim’s identity.

An initial finding showed that the ministry was not briefed on the master sergeant’s sexual assault allegations when her death was reported to the defense minister.

Also on Tuesday, the ministry said it had questioned the man who stands accused of sexually assaulting the victim, and the public defender who allegedly neglected his duties. He did not meet the victim even once to discuss the complaint between March and May.

Earlier in the day the victim’s parents told the prosecution team that their daughter had been the victim of another sexual assault, one perpetrated a year earlier by an Air Force warrant officer that was never brought to attention.

The family also said her public defender had done little to seek redress and had knowingly shared the victim’s identity with colleagues.

The lawyer, who had been in the role for about a year as an officer, is facing a lawsuit from the victim’s family. He denies any wrongdoing.