Its second rate cut in three months -- to the lowest ever level -- is in line with the global trend toward monetary easing.

“We have cut the base rate considering the lower-than-expected growth outlook and low inflation,” said Bank of Korea Gov. Lee Ju-yeol in a press conference. 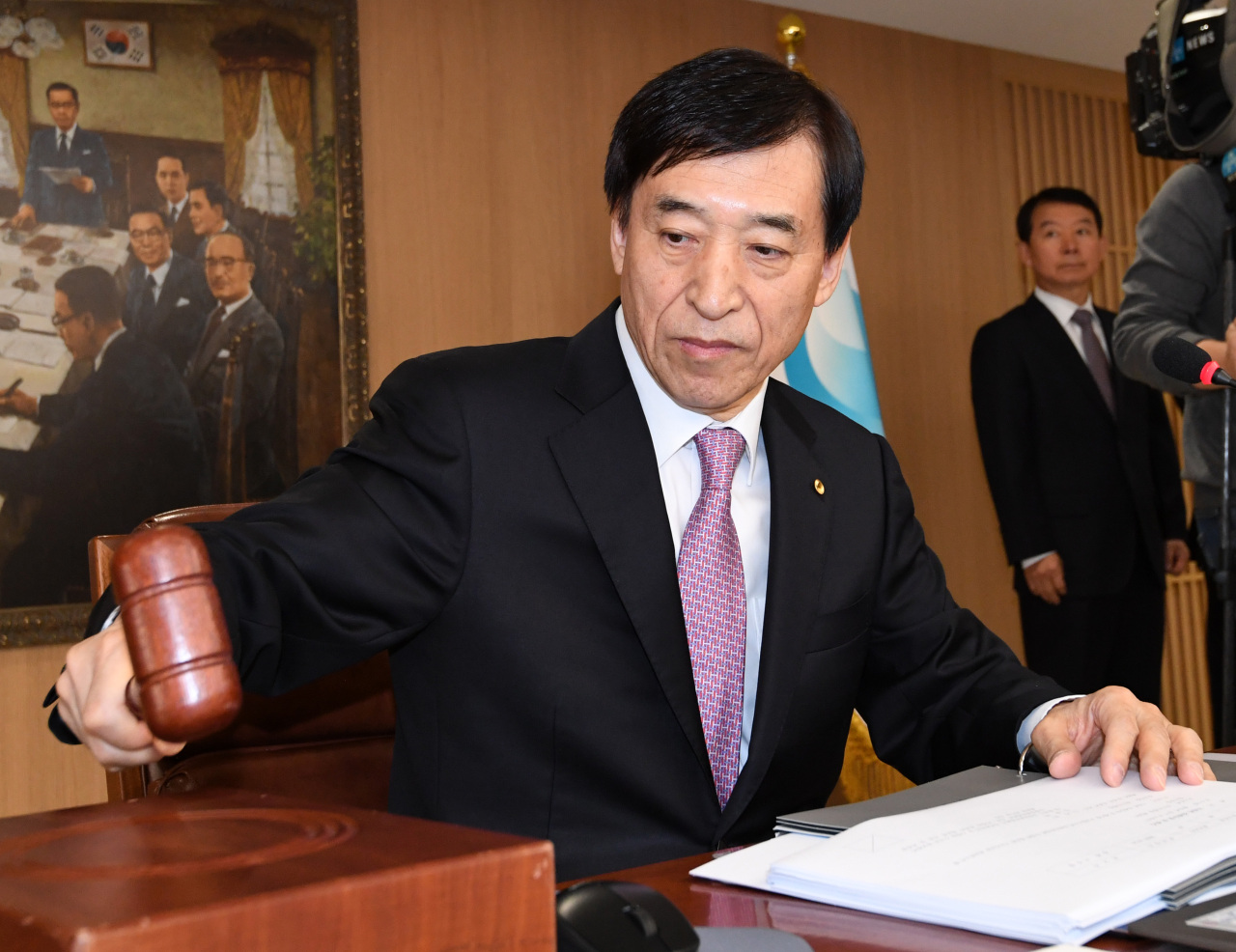 Bank of Korea Gov. Lee Ju-yeol on Thursday chairs the October meeting of the rate-setting Monetary Policy Board. (Yonhap)

The BOK’s rate-setting Monetary Policy Board decided to lower the base rate by 25 basis points from 1.5 percent that it had set three months ago.

The move paralleled the US Fed Reserve’s decision last month to lower its key interest rate to the 1.75-2 percent range, down 25 basis points from the previous 2-2.25 percent range.

The BOK board cited contractions in trade, slow domestic growth, financial volatility, trade protectionism and geopolitical risks as the main reasons for its decision.

However, two of the seven board members voted for a rate freeze, Lee added.

The monetary easing move was largely anticipated in light of the recent economic performance.

In the board’s August meeting, two dovish members called for an additional rate cut, while others suggested a wait-and-see approach in light of the previous rate cut.

Asia’s fourth-largest economy saw its exports slip for the 10th consecutive month in September, dipping 11.7 percent on-year. It also logged negative growth in consumer prices for the first time ever, with an on-year decline of minus 0.4 percent in September.

The International Monetary Fund on Wednesday slashed its growth outlook for Korea’s economy this year to 2 percent, down 0.6 percentage point from its earlier forecast.

Frayed Seoul-Tokyo trade relations were also seen as a negative factor, though the BOK chief said the impact was not a major factor in the monetary policy decision.

“The consequences of Japan’s export curbs have so far been limited, falling short of affecting actual industrial production,” Lee said.

He also said Korea still had space in its policy operations despite the rate cut.

Market concerns persisted, however, as the pace of domestic economic growth is expected to to slow down throughout the rest of the year.

The BOK’s estimation for this year’s economic growth rate currently stands at 2.2 percent, having fallen steadily from the 2.6 percent forecast in the beginning of the year.

“(Even) the 2.2 percent growth this year will not be easy to achieve,” BOK Gov. Lee Ju-yeol admitted at a parliamentary audit session last week, hinting at a downward adjustment by the year-end.

“(The BOK) will maintain an easing stance in order to aid the recovery of economic growth.”

As for the low inflation trend, Lee has repeatedly cited a base effect created by the high prices of agricultural products last year, denying that the country is facing deflation.