The call came hours after Cho was grilled in his parliamentary confirmation hearing that ended close to midnight over various allegations involving his wife and daughter.

Cho's wife was formally charged by the prosecution Friday on suspicion of forging a school certificate for the couple's daughter that many believe may have played a critical role in her admission into a medical school. 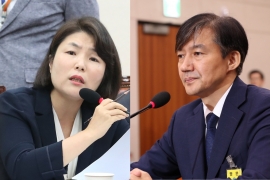 "Nominee Cho has shown such arrogance, ridiculing the people and staying above the law throughout the confirmation hearing. He is unfit as a justice minister nominee and unfit as the head of a household," LKP spokesperson Rep. Jun Hee-kyung said in a released statement.

With the confirmation hearing held on the last day of a legal deadline, or 28 days after Moon's nomination of Cho, the president is now legally allowed to appoint the minister nominee who does not require parliamentary approval.

A senior official from the presidential office Cheong Wa Dae earlier noted the president may do so in the near future.

"There was no decisive blow," the official said of Cho's confirmation hearing while speaking on condition of anonymity.

"No new allegation that surfaced since Cho's press conference held Sept. 2 has indicated any legal violations or illegal acts by the nominee himself," the official added.

LKP lawmakers strongly reacted, saying the lack of a "decisive blow" did not mean the nominee is fit for the ministerial post.

"There have been new allegations involving Cho every day for nearly a month," Rep. Chang Je-won of the LKP said. "Should President Moon refuse to withdraw his nomination, the opposition party will have no choice but to intensify the level of its fight that will include a parliamentary probe, a motion to dismiss (the new justice minister) and protest rallies." (Yonhap)