The parliamentary confirmation hearing of Justice Minister nominee Cho Kuk Friday focused on the number of times he communicated with the president of Dongyang University.

There are speculations that his wife surnamed Chung falsified the President’s Award her daughter received from the university in 2012 without the approval of President Choi Seong-hae, which is based in North Gyeongsang Province. 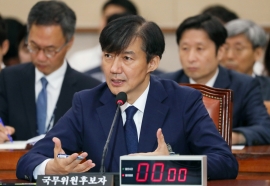 Main opposition Liberty Korea Party lawmakers on the Legislation and Judiciary Committee accused Cho of attempting to destroy evidence and committing perjury in contacting Choi earlier in the week.

The university’s said they spoken once on the phone earlier in the week.

“I spoke briefly with him after my wife,” Cho said at the hearing.

“My wife talked about a few things, including ‘didn’t you delegate your authority.’ At this point I was handed over the phone and I said, ‘President I cannot ask you to lie, I request you to reveal the truth at the investigation‘,

Choi’s statement contradicts his argument that he had received four incoming calls from Chung’s phone number on Sept. 4, which he responded to twice.

“During his phone calls, nominee Cho requested me to issue a press release statement saying I had delegated authority to professor Chung (to issue the award),” Choi told a local news agency Friday.

“He also said, ‘I asked the legal team and that is how both the university president and professor Chung can weather the current circumstances.’”

As new allegations were raised against Cho’s family, public opposition to the embattled nominee rose to 56.2 percent, a survey by a local pollster showed.

The gap between those who oppose Cho and those who support him is now at its widest.

The percentage of people against Cho’s nomination increased 4.7 percentage points from the previous poll to reach 56.2 percent. His supporters made up 40.1 percent of the total, down 6 percentage points, a Realmeter survey showed.

The increased objections to Cho followed fresh suspicions, including the allegation that his wife attempted to destroy evidence of the family’s private equity fund investments by taking her personal computer out of her office at Dongyang University two days before a prosecution raid.

Cho’s wife allegedly went to her office with an employee of Korea Investment & Securities. The computer was later turned over to the prosecution.