As new allegations were raised against Justice Minister nominee Cho Kuk’s family, public opposition to the embattled nominee rose to 56.2 percent, a survey by a local pollster showed. The gap between those who oppose Cho and those who support him is now at its widest.

The percentage of people against Cho’s nomination increased 4.7 percentage points from the previous poll to 56.2 percent. His supporters made up 40.1 percent of the total, down 6 percentage points, the survey by Real Meter showed. 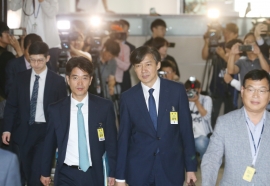 The 16.1 percentage point gap between Cho’s supporters and his opponents marks the largest among the four surveys conducted so far.

The latest Real Meter poll of 501 adults was conducted Thursday, one day ahead of the National Assembly confirmation hearing.

The increased objections to Cho followed fresh suspicions that Cho’s wife attempted to destroy evidence of the family’s private equity fund investments by taking her personal computer out of her office at Dongyang University in North Gyeongsang Province two days before the prosecution raided the office.

Cho’s wife, surnamed Chung, allegedly went to her office with an employee of Korea Investment & Securities. The computer was later turned over to the prosecution.

In the first poll on Cho’s nomination, late last month, opposition to his nomination stood at 54.5 percent and support at 39.2 percent, Real Meter said.

After Rhyu Si-min, a liberal politician-turned-writer, spoke in defense of Cho in a radio interview, support for Cho rose slightly to 42.3 percent, while 54.3 percent were opposed.

Following Cho’s press briefing earlier in the week, which ran eight hours and 20 minutes, support for Cho increased to 46.1 percent, up 3.8 percentage points. But his opponents made up 51.5 percent of the total, the survey showed.