Late last year, the Manila government informed the South Korean embassy in the Philippines that it had opted to purchase the US-made UH-60 Black Hawk helicopter, the official said on condition of anonymity. 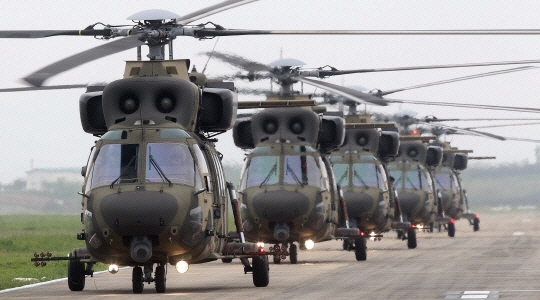 Surion choppers (Yonhap)
The apparent failure came after a MUH-1 Marineon -- the Marine variant of the KUH-1 Surion helicopter -- crashed at a military airport in the southeastern city of Pohang in July, killing five of the six Marines aboard.

"We cannot make assumptions regarding the Philippines' decision-making, but various factors (including the chopper crash) appear to have influenced its final decision," the official told Yonhap News Agency.

A KAI official said that his company has yet to be notified of Manila's decision.

"We have not been informed that anything has been finalized. ... Though Manila has said it has placed priority (on the US chopper), it has yet to sign any contract (with the US firm)," the official told Yonhap.

"I think it is too premature yet to conclusively say that (the competition) is over," he added. (Yonhap)