[ The Korea Herald – Send E-mail ]
Typhoon Soulik alert for Korean Peninsula
By Lim Jeong-yeo
Published : Aug 19, 2018 - 14:28
Updated : Aug 19, 2018 - 14:28
Typhoon Soulik is expected to pass through the Korean Peninsula as early as Wednesday, bringing with it a chilling respite to the draught-stricken land but also the potential for storm damage.

If Soulik lands in Korea as forecast, it will be the first typhoon to directly hit the Peninsula since Typhoon Sanba did six years ago in 2012.

Soulik formed off the coast of Guam on Thursday as a small storm, but as it travels northward it has gradually grown to a medium-sized typhoon with the intensity of a category 4 storm. As of Saturday, 3 p.m., Soulik was detected some 1,190 kilometers southeast to Japan’s Kagoshima region. According to international weather agencies, the typhoon is drawing an arc, brushing past Japan and potentially directly sweeping through the Korean Peninsula. 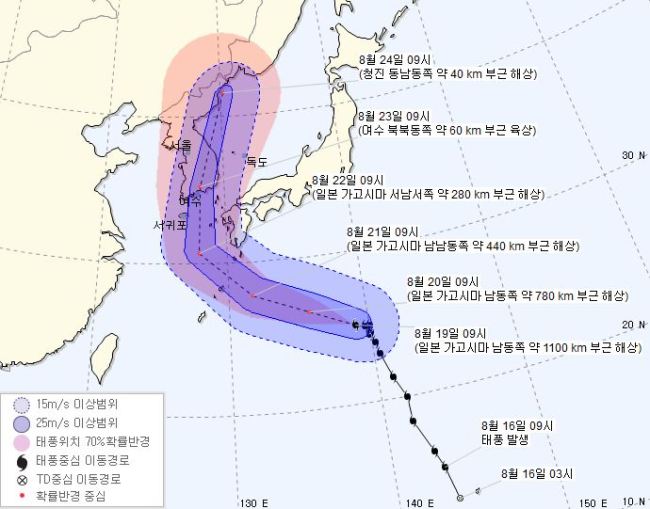 Soulik is moving at a speed of 12 kph with a core air pressure of 955hPa. It is forecast to travel adjacent to Jeju’s Seogwipo region at around 3 p.m. on Wednesday and reach the waters near Busan on Thursday.

Previously this summer, typhoon Leepi and tropical storm Beryl narrowly avoided striking Korea due to the high pressure in the North Pacific Ocean.

Soulik may hit the peninsula more heavily, however, as the national weather agency predicts an expansion in North Pacific high pressure may force the typhoon further inland.

While Soulik is anticipated to cool the summer heat and alleviate the green tides clogging up Korea’s rivers, it is also feared to cause losses on farms and other damage.