This is the first time an operator of a cryptocurrency exchange in Korea has been charged. 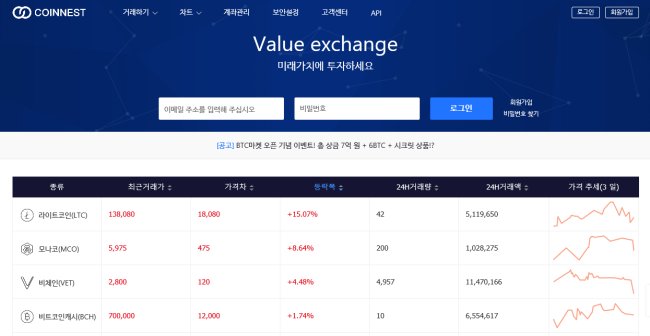 (Screen snap of Coinnest website)
Prosecutors are seeking arrest warrants for the executives, including CEO Kim Ik-hwan, in the next two days. They are alleged to have swindled customers of digitized assets for their personal accounts, prosecutors said.

This is the first legal action by the Seoul Nambu District Public Prosecutors’ Office since it raided three cryptocurrency exchanges, including Coinnest, in mid-March. The prosecution has been looking into accounting-related documents seized from the exchanges for three weeks.

Coinnest opened its business in June last year, on the back of capital investment from Chinese entities such as Bitmain and Quantum Foundation.

As of Thursday, Coinnest was the fifth-largest cryptocurrency exchange in terms of trading volume in Korea, following Upbit, Bithumb, Coinone and Korbit. It has traded over 30 types of encrypted coins or tokens, including TRON, bitcoin, ETH of Ethereum and NPXS of Pundi X.

Coinness is currently not a member of the Korea Blockchain Association, a local self-regulatory body joined by 23 cryptocurrency-related business entities. The association explained that Coinness has not taken steps to extend its membership that ended in February.