[ The Korea Herald – Send E-mail ]
Samsung BioLogics says 4th plant production plans ‘still under review’
By Sohn Ji-young
Published : Jan 15, 2018 - 15:50
Updated : Jan 15, 2018 - 16:17
Samsung BioLogics said Monday that its plans to build a fourth biologics production plant are “still under review,” and that its main focus at present is securing sufficient orders for its third plant, which is slated to begin commercial production in 2020.

The company has yet to set a concrete timetable for its plant expansion and will have to review market conditions before confirming the construction of a new plant, the company said.

The statements followed remarks made by Samsung BioLogics CEO Kim Tae-han during the JP Morgan Healthcare Conference in San Francisco, where he hinted at the possibility of a fourth manufacturing plant. 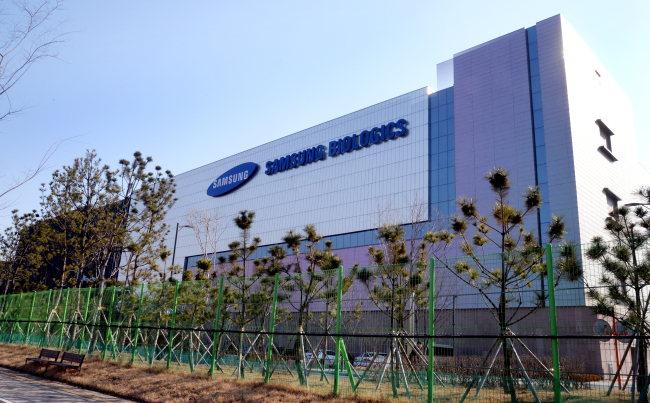 Samsung BioLogics’ headquarters in Songdo, Incheon (Park Hyun-koo/The Korea Herald)
Kim’s remarks, published Sunday by a local news outlet, had led shares of Samsung BioLogics to soar by 6.49 percent from the previous trading day to a record high of 443,000 won ($419) on Monday morning. The shares closed at 419,500 won on the day.

The Samsung BioLogics CEO believes the possibility of a fourth production plant will hinge on the results of third-phase clinical trial results of new Alzheimer’s disease therapies slated to be announced in 2019, the company said.

Right now, global drugmakers including Roche and Biogen are conducting phase 3 trials for drug candidates that fight Alzheimer’s by targeting the protein plaques found in the brains of those with the disease.

However, previous development efforts on this front have been unsuccessful. Eli Lilly’s experimental Alzheimer’s drug failed in last-stage clinical trials in 2016, marking a big setback for drugmakers and scientists seeking a cure for Alzheimer’s.

If the trials are successful, global demand for the first-ever Alzheimer’s drugs would peak and in turn forge new business opportunities for contract drug manufacturers like Samsung BioLogics, which manufacture biologic drugs based on orders from clients.

If Samsung BioLogics decides to build a fourth plant, the facility will likely boast an annual production capacity of 180,000 liters, as the CEO mentioned that all plants constructed from now on will be similar to its third plant, whose capacity is 180,000 liters.

Founded in 2011, Samsung BioLogics is a contract drug manufacturer under the Samsung Group that creates biologic drugs on behalf of client pharmaceutical companies that place orders.

The Songdo-based company has currently sealed contract manufacturing deals with 10 clients including Roche and Bristol-Myers Squibb to produce 15 different products. Its cumulative order volume is now at around $3.3 billion, it said.