North Korea claimed Thursday that some 4.7 million students and workers have volunteered to join the military or re-enlist in the army since its leader Kim Jong-un vowed last week to retaliate against the United States.

North Koreans' show of solidarity came as Kim issued a statement on Friday vowing to take the "highest-level" actions in response to US President Donald Trump's threat to "totally destroy" the North over its nuke and missile programs.

Over the past six days, millions of young men expressed their will for military enlistment to counter the US force, and even some 1.22 million women vowed to voluntarily follow suit, according to the Rodong Sinmun, the main newspaper. 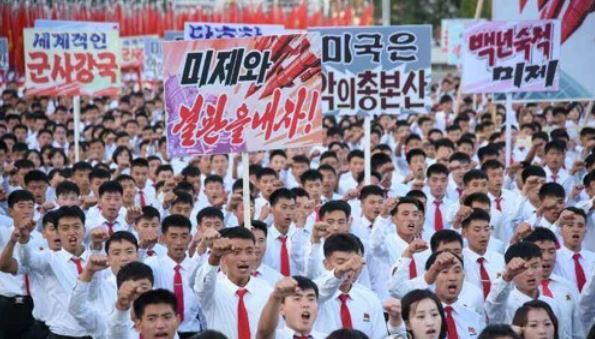 This photo carried by North Korea`s main newspaper the Rodong Sinmun on Sept. 24, 2017, shows North Koreans holding a rally against the US and supporting its leader Kim Jong-un`s statement which included a vow to retaliate against Washington. (For Use Only in the Republic of Korea. No Redistribution) (Yonhap)
When North Korea's tensions with the US heightened, Pyongyang usually claimed that its young citizens voluntarily enlisted in the military in its propaganda campaigns aimed at bolstering internal solidarity.

North Korea made a similar assertion last month when it condemned the U.N. Security Council for adopting US-led resolutions over Pyongyang's launches of intercontinental ballistic missiles in July.

Tensions between the US and North Korea are escalating amid exchanges of bellicose rhetoric. North Korea threatened that it could consider the detonation of a hydrogen bomb over the Pacific Ocean.

Trump said Tuesday that military options for North Korea would be "devastating," though they are not preferred. (Yonhap)