[ The Korea Herald – Send E-mail ]
US says 'strategic patience' on NK is over
Tillerson says military option is on the table, calls China’s THAAD retaliation ‘inappropriate, troubling’
By Shin Hyon-hee
Published : Mar 17, 2017 - 19:37
Updated : Mar 17, 2017 - 19:37
With Washington taking a North Korea policy overhaul, US Secretary of State Rex Tillerson on Friday declared that the existing “strategic patience” approach is over, saying all options including military action are on the table.

At a joint news conference with Seoul’s Foreign Minister Yun Byung-se, Tillerson also urged China to cease its economic retaliation against South Korea over its plan to host a US missile shield here, calling it “unnecessary, inappropriate and troubling.”

“Efforts for North Korea to achieve a peaceful stability for the last two decades have failed to make us safe,” the secretary said. 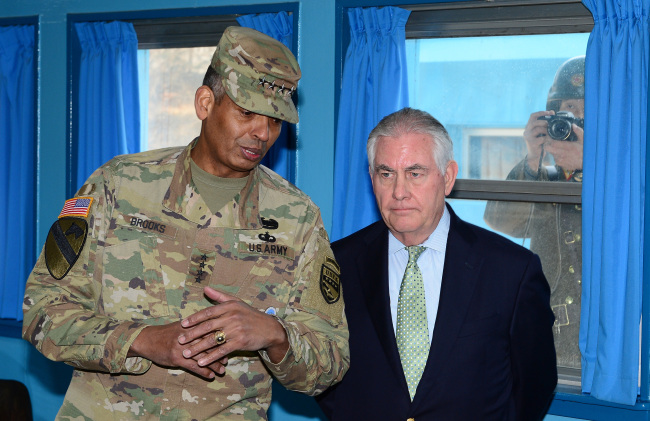 A North Korean soldier (right) takes a snapshot from outside the window while US Secretary of State Rex Tillerson (center) listens to USFK Commander Gen. Vincent K. Brooks during his visit to Panmunjeom, the truce village on the inter-Korean border, Friday. (Yonhap)
“Let me be very clear: the policy of strategic patience has ended. We are exploring a new range of diplomatic, security, economic measures. All options are on the table.”

His remarks represent the Donald Trump administration’s strongest signal yet that it would take a much tougher stance than its predecessors including Barack Obama’s “strategic patience” policy.

“Certainly we do not want for things to get to a military conflict, we’re quite clear on that in our communications, but obviously if North Korea takes actions that threaten the South Korean forces or our own forces, then that would be met with an appropriate response,” he said.

“If they elevate the threat of their weapons program to a level that we believe requires action, that option is on the table.”

Tillerson has said his maiden Asia tour, which also took him to Tokyo and includes a stop in Beijing from Saturday, is aimed at exchanging views on a “new approach” toward Pyongyang.

Stressing the Terminal High Altitude Area Defense system’s raison d’etre, he called for China to refrain from taking retaliation against Seoul and join in addressing the threat that “makes THAAD necessary.”

“We also believe it is not the way for a regional power to help resolve what is a serious threat for everyone. So we hope China will alter its position on punishing South Korea,” Tillerson said.

“We hope they will work with us to eliminate the reason THAAD is required.” 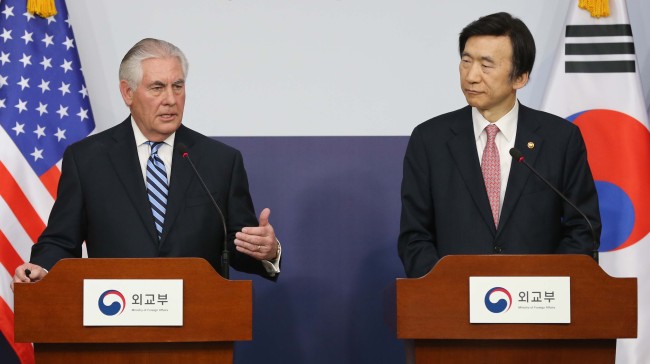 South Korean Foreign Minister Yun Byung-se (right) and US Secretary of State Rex Tillerson hold a joint press conference following their talks at the South Korean Foreign Ministry in Seoul on Friday. (Yonhap)
Upon his landing at the Osan Air Base earlier in the day, the former Exxon Mobil chief executive took a tour around the Demilitarized Zone near the inter-Korean border and had lunch with soldiers guarding the Joint Security Area. Then he paid a visit to acting President and Prime Minister Hwang Kyo-ahn before meeting with Yun.

But Tillerson’s comments may signal a future possible friction with the next leadership of South Korea, which faces a presidential election on May 9.

Many leading contenders including frontrunner Moon Jae-in previously served in the liberal administrations that traditionally favor engagement with North Korea instead of sanctions and pressure, not to mention military measures. They also have shown a reserved stance toward THAAD, while pledging to upend or renegotiate a December 2015 deal between South Korea and Japan on wartime sex slavery, for which Tillerson expressed support in Tokyo on Thursday.

The secretary raised expectations for a “productive relationship” with the next government here, saying he hopes it will “continue to be supportive” of the THAAD deployment plan.

Yun, for his part, echoed the need for a military step against the communist neighbor, saying its threats are “unprecedented, imminent” and require “far more effective and various countermeasures.”

At a separate session with Hwang, Tillerson reaffirmed the “ironclad” alliance that serves as a “linchpin for security and stability” in response to the growing North Korean threats.

The prime minister displayed gratitude for his visit despite “domestic difficulties associated with the leadership transition,” endorsing Trump’s remarks during their earlier phone call that the allies are “100 percent together” on North Korea and other regional and global issues.

Meanwhile, Tillerson’s shortened diplomatic consultations and public events in Seoul spawned a flurry of speculation given a leadership vacuum and political uncertainties.

A joint news conference aside, Tillerson spent almost 2 1/2 hours with Japanese Foreign Minister Kishida including a dinner, and another hour with Prime Minister Abe. But his meetings with Yun and Hwang were each confined to about an hour, without a lunch or dinner gathering. Seoul officials said the US side opted not to have a meal together, citing the secretary’s “fatigue.”