While the figures lived in the Joseon era’s earlier half, during which historians say currency usage was rare, their counterparts in the latter half of the era are believed to have been quite familiar with currency circulation.

Currencies used were called “yeopjeon,” a sort of brass coin, or “sangpyeong tongbo,” as seen in historical TV dramas or movies. 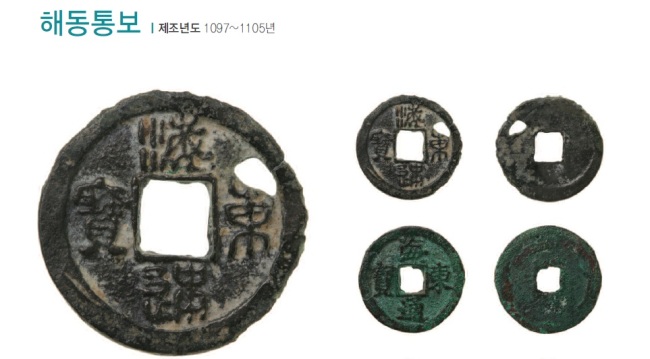 According to several local scholars, the earliest archeological proof of Korea’s currency dates back over a millennium to at least A.D. 996, when the first iron-minted coins -- dubbed “geonwon jungbo” -- were introduced during the Goryeo Dynasty (918-1392).

Though some historical books claim that the ancient Gojoseon kingdom in the Bronze Age minted metal coins, later dubbed “jamojeon,” in about B.C. 900, scholars have yet to discover sufficient support for such claims.

In the middle of the Joseon era, King Injo reintroduced Joseon tongbo, a copper coin, which was originally initiated by King Sejong. Joseon tongbo fueled the debut of the well-known sangpyeong tongbo in the 17th century.

Later, an invasive war waged by the China-based Qing Dynasty led to the suspension of the coinage. High dependency on imported copper from Japan also added to the monetary instability.

Although dangbaekjeon’s material value was only five to six times higher than the previous currency, its face value was higher by about 100 times. Such a discrepancy inevitably pushed up consumer prices. The price of rice, for instance, increased sixfold in just one to two years.

Amid confusion caused by the dangbaekjeon, international traders in some major ports -- Busan, Wonsan and Incheon -- circulated foreign currencies, such as silver coins of Japan, Mexico and Russia and silver ingots of China.

After King Gojong transformed his kingdom into the “Great Han Empire,” he sought stronger monetary reform. He moved the Jeonhwanguk from Incheon to Yongsan in Seoul and declared the “Ordinance on Currency,” promulgating the Imperial Coinage of Prerogative and the gold standard.

To ensure financial sovereignty, the Bank of Korea was founded in 1909 as the county’s first central bank.

After Joseon was stripped of sovereignty in 1910, the first Bank of Korea was renamed the Bank of Joseon. It supported the military expenditures of the Japanese government during the second Sino-Japanese War and the Pacific War.

The war funding expanded the volume of its notes in circulation, and eventually depleted the nation’s wealth.

The newer Bank of Korea set out on June 12, 1950, shortly after Korea’s liberation from Japanese colony rule. As the first step to retrieving sovereignty, the BOK issued its first bank notes, a symbolic move in taking over from the Bank of Joseon.

But the Korean War broke out only two weeks after the BOK’s foundation. 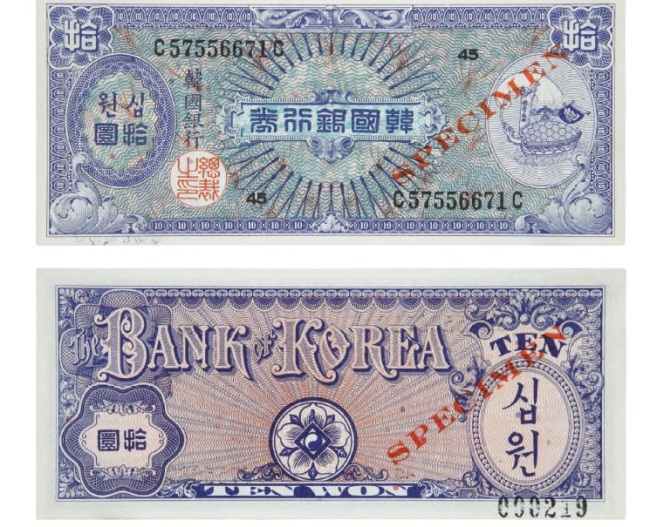 In 1951, Korea launched the printing facilities of the Korea Minting and Security Printing Corp. in Busan. The 1,000 won notes depicted the likeness of the nation’s first president, Syngman Rhee, and the 100 won notes showed the main Gwanghwamun Gate of Gyeongbokgung Palace in Seoul.

The Korean War caused the destruction of production infrastructure, which ultimately led to soaring prices. This necessitated currency reform in February 1953.

Under the reform, the denomination of Korea’s currency changed from won to hwan at a rate of 100 won for 1 hwan. Won-denominated currencies were withdrawn for conversion, causing a huge run on banks.

The BOK introduced 10 hwan and 50 hwan coins in October 1959, which were printed at the Philadelphia Mint of the U.S. Government.

The government conducted its second major currency reform in June 1962. One new won was equivalent to 10 old hwan. Also part of the reform included issuing all notes from domestic printing facilities.

In addition, the bank began circulating a smaller denomination of “jeon” so that people could conveniently make transactions of small values, at 100 jeon to 1 won.

Notes of higher denomination continued to be issued and replaced, following the rapid growth of the nation’s gross domestic product.

The world sees the introduction of new currencies, such as cyber money and bitcoins, as an intricate and innovative process. And the process was no less eye-popping some millennia ago, as the history of Korean currency shows.