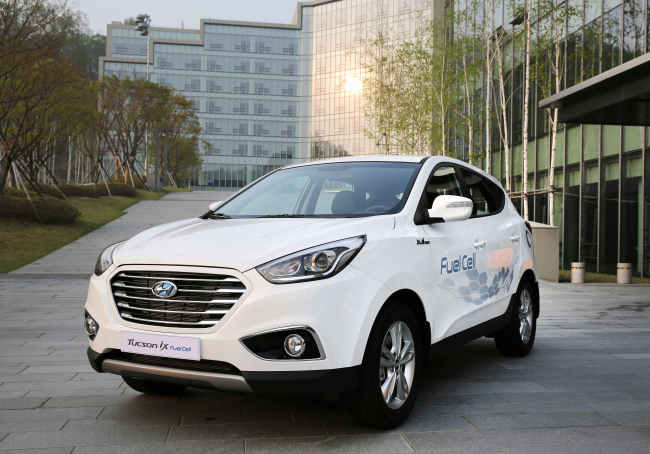 Hyundai Motor’s fuel-cell Tucson. (Hyundai Motor)
Hyundai Motor is looking forward to a Prius heyday with its hydrogen-powered Tucson, which will go on sale in the U.S. in May.

“About 20,000 customers have already shown their intention to buy the car. We plan to reduce the number to 1,000 considering the situation of charging stations in their neighborhoods,” said Lee Ki-sang, senior vice president and head of Hyundai’s R&D center for eco-friendly vehicles.

In February 2013, Hyundai became the first global carmaker to mass-produce a fuel cell vehicle, based on its Tucson ix SUV. Toyota and Daimler plan to launch their own mass-market versions next year.

The Hyundai cars have thus far been supplied mostly for government programs in Europe and Korea. So the U.S. debut is expected to be a real litmus test to gauge whether a fuel cell model could achieve mass-market acceptance, just as the Toyota Prius did as the first hybrid, despite earlier skepticism.

The hydrogen-powered Tucson can drive 549 kilometers on a single charge, comparable to a fuel efficiency of 27.8 kilometers per liter for a gasoline-powered vehicle. Water is the only substance that the car emits from its tailpipe.

But the main challenge facing Hyundai engineers now is the vehicle’s hefty pricetag of 150 million won ($145,000), coupled with a dearth of hydrogen filling stations that are also expensive to build.

In the U.S., the fuel cell Tucson will lease for $499 per month, including unlimited free hydrogen refueling, for a 36-month term, with a $2,999 down payment.

“OEMs, not only Hyundai, may face a chicken-and-egg problem,” Toru Hatano, principal analyst at IHS Automotive, said via email, predicting that consumer demand for the futuristic model could be limited in the short- to mid-term.

“To expand the fuel cell vehicle market, what OEMs can do is to reduce cost and increase efficiency. However, to reduce cost, a large sales volume is needed.”

As part of efforts to cut the cost, Hyundai said it has invested in building most of the components and hydrogen for itself, in partnership with local suppliers.

“We are also working on a production platform under which any new auto parts can be produced in the future without additional investment,” said Lee, the R&D chief.

“We aim to reduce the car’s price to be 10 percent above that of diesel models ― the marketable price level suggested by industry watchers ― by 2025.”

According to Hyundai, the fuel cell car market would see some 6,000 vehicles in 2015 when more mass-market models are launched and the figure is expected to hit the 250,000 mark by 2025.