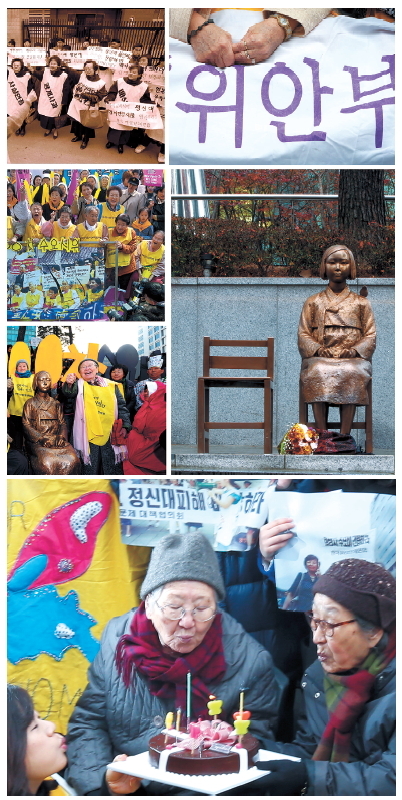 The weekly rally organized by The Korean Council for the Women Drafted for Military Sexual Slavery by Japan, known as the Wednesday Rally, had marked its 22nd anniversary the previous week, on Jan. 8, and the participants and the organizers appeared newly invigorated by the milestone: For 22 years, the Wednesday Rally has continued, rain or shine, setting a record for the longest continuing protest in history.

Two elderly women, Kim Bok-dong and Gil Won-ok, swaddled in heavy coats, caps and scarves, sit stoically, as they have for years, hoping their voices and those of their fellow former Japanese military sex slaves’ will be heard. They are survivors of the system of military sex slavery operated by the Japanese Imperial Army during World War II that saw some 200,000 to 300,000 young women, mostly from Korea, China and other Asian countries, forced into prostitution.

Sitting in a van waiting for the organizers to load the banners and sound system, Kim, 89, quietly tells her story, a story she has repeatedly told governments, media organizations, NGOs and anyone who will listen, both in Korea and around the world. She has been attending the Wednesday Rally for 20 years.

Kim was taken away at age 14 and was forced to serve the Japanese Imperial Army as a military sex slave for eight years. “I went wherever the Japanese Army went ― Taiwan, Guangdong, Hong Kong, Malaysia, Sumatra, Japan, Singapore. I was in Singapore when the war ended,” Kim says. Mistaken for a Japanese, she was taken by the U.S. military as a prisoner of war. “I was 22 by the time I returned to Seoul.”

Recent years have seen Kim on the road again, this time as a witness of the brutal military sexual slavery, to countries that fought during World War II. “I bring the same message. The Japanese government knows it (military sexual slavery) but denies it. That is why I continue this. When I go to those countries and talk about what had been done to me, they are shocked,” she says.

“We didn’t leave the country because we wanted to. We were forcefully taken away because our country was weak. You could say there is responsibility on the part of the Korean government,” Kim says.

“I want the Japanese government to repent and apologize legally.”

The Wednesday Rally will continue until the Japanese government accepts the women’s voice, says Yoon Mee-hyang, a representative of the council for the women. 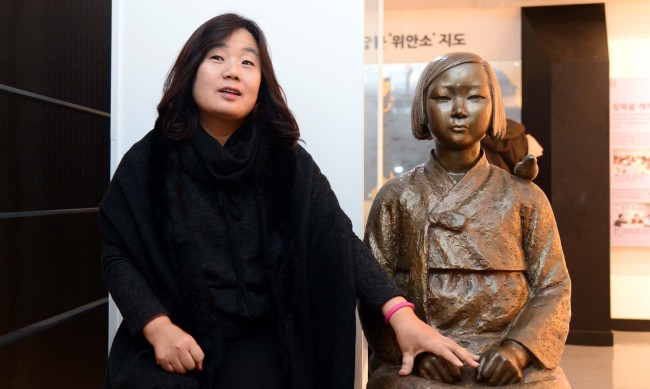 Yoon Mee-hyang, representative of the Korean Council for the Women Drafted for Military Sexual Slavery by Japan, poses with a statue representing a young girl forced into military sexual slavery at the War & Women’s Human Rights Museum in Seoul, Jan. 22. (Kim Myung-sub/The Korea Herald)
Speaking at her tiny office in the War & Women’s Human Rights Museum, a museum which opened in 2012 in a residential neighborhood of Seongsan-dong, on Jan. 22, Yoon says her organization’s goal is pressuring the Japanese government into officially apologizing and making official reparations. It also aims to educate Korean society about this part of the country’s history.

The first Wednesday Rally was attended by women’s groups. It was only on the 10th rally that the former military sex slaves, euphemistically called “comfort women” by the Japanese military, began joining the rally. “Five women joined us at that rally,” Yoon recalls, explaining the general attitude in society at the time that made it difficult for the women to come forward. It was seen as a shameful past in the country’s history; something that people would rather sweep under the rug and not talk about.

The public’s attitude, however, has changed over the past two decades. “Before, people didn’t welcome the rally. But things have changed a lot now. Before, there was misunderstanding about the past history, but now that they are aware, there is a lot more support,” Kim reflects.

What has been accomplished over the past 22 years? After all, the aging women still sit in front of the Japanese Embassy in Seoul every Wednesday, making the same demands ― an official apology and legal reparation.

However, a bigger accomplishment may be the changes in the former military sex slaves themselves. “In the 1990s, everything was gray. We were in so much pain. Now the women are viewed as activists building historical justice. I can see the changes in the women’s expressions and language,” Yoon says.

The women have come out of their shells as victims and are now working to help others who face similar human rights violations. Kim Bok-dong and Gil Won-ok initiated the Butterfly Fund in 2012, pledging to donate their future reparations from the Japanese government to the fund for assisting female victims of sexual violence in armed conflicts.

“The fund is being used to assist an activist in the Democratic Republic of Congo who is helping female victims of that country’s civil war, and was also a victim herself. The fund is also delivered to aged female victims of the Korean military’s sexual violence in Vietnam and assists the second and third generations of children born of such violence,” Yoon said. This year, the fund looks to assist Palestinian children.

Kim Bok-dong would like to see the matter of a Japanese apology and legal reparation settled as soon as possible. While the Japanese government claims that it has officially apologized and that all compensation was settled in the 1963 Korea-Japan Normalization Treaty, she rejects the Japanese claims, as does the Korean government. The Korean government claims that the Japanese apology was not official ― an assertion that is buttressed by Prime Minister Shinzo Abe’s recent controversial visit to the Yasukuni Shrine, which honors Class-A war criminals ― and it disagrees that reparations for the former military sex slaves were covered under the 1965 deal.

Kim lives at a home in Seoul with two other former military sex slaves and activists who take care of them. Suffering from poor eyesight ― she is blind in one eye ― she says her eyes bother her especially when she travels overseas.

Yet, she is determined to continue her rally for an official apology and legal reparation from the Japanese government. “If what I wish for is realized, I could die today with my legs stretched,” she says.

On Saturday in Paris, a petition drive to collect 100 million signatures for the resolution of Japanese military sexual slavery took place, part of worldwide effort to raise awareness about the issue of wartime violence against women and pressure the Japanese government to take official action. A similar event is planned for Berlin next month. “Once we reach 100 million people, the collected signatures will be presented to the U.N.” says Yoon.

On Sunday, Hwang Geum-ja, a former military sex slave, died at age 90, bringing the number of survivors of Japanese military sexual slavery to 55 from the 239 who had officially registered with the government in the 1990s. With the average age of the survivors at 86, with some 10 women over 90, the number is set to decline fast, notes Yoon.