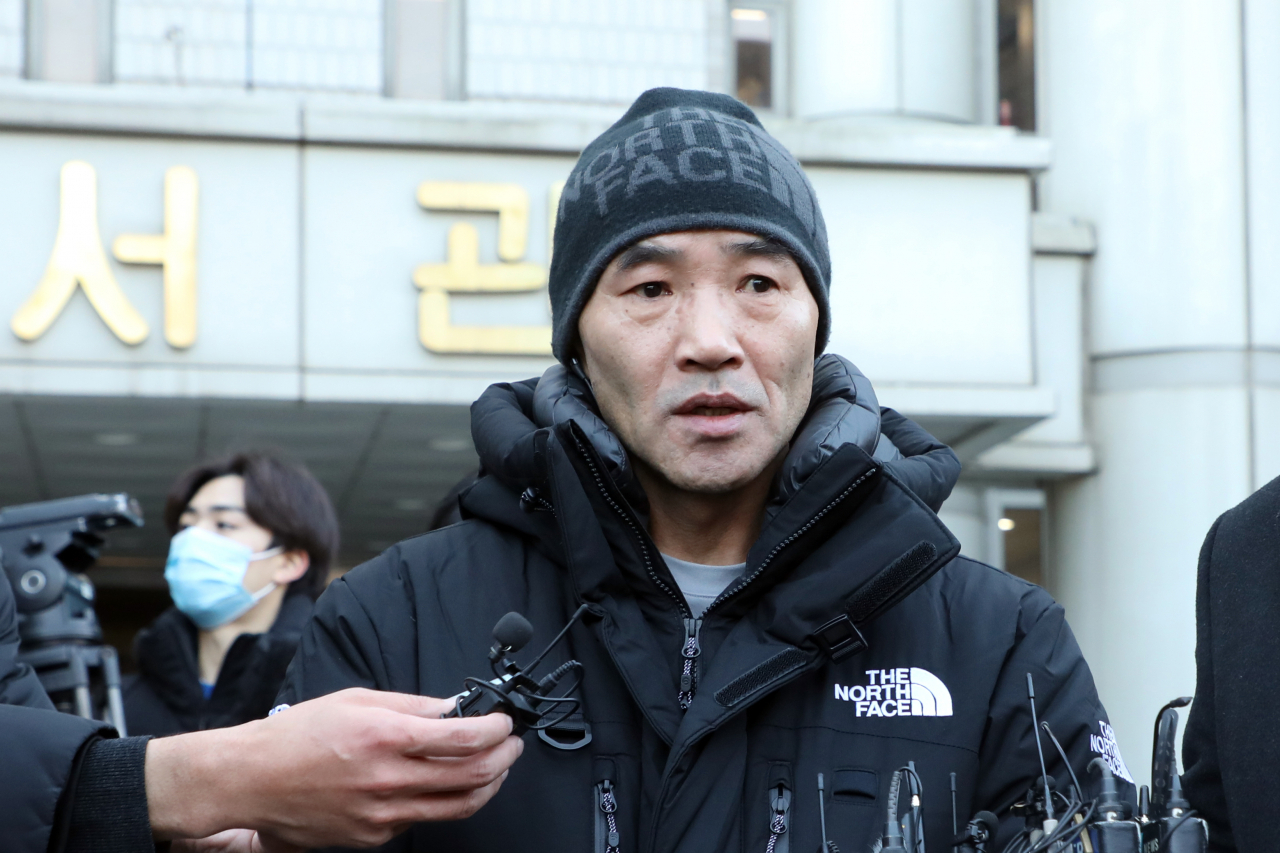 Lee Rae-jin, brother of the fisheries official Lee Dae-jun who was murdered by North Korean military in September 2020, speaks with media at the Seoul Central District Court on Friday. (Yonhap)

Following former national security adviser Suh Hoon’s arrest on Saturday for allegedly covering up North Korea's killing of a South Korean official in the West Sea, clashes between ruling and opposition parties are intensifying, with eyes on whether the investigation will target former President Moon Jae-in.

The prosecution issued an arrest warrant Saturday at around 4:55 a.m. against former national security adviser and spy agency chief Suh after more than 10 hours of questioning, citing the "risk of Suh destroying evidence." Suh was the first presidential aide of Moon to be arrested among those accused of mishandling of the death of South Korean Ministry of Oceans and Fisheries official Lee Dae-jun in September 2020.

The ruling party and an attorney representing the deceased official's brother Lee Rae-jin are ramping up calls for justice over the former Moon administration's labeling of Lee Dae-jun as a South Korean defector to North Korea. This had effectively relieved Seoul of its duty to protect Lee and acquitted Pyeongyang of its summary execution. Meanwhile, evidence that Lee was a defector remains under question.

Moon’s statement, revealed by main opposition Democratic Party Rep. Youn Kun-young, showed that Moon had accepted the conclusion by the ministries and the spy agency that Lee had defected, based on "all the information and context available."

"Moon confessed (in his statement) that he made the final conclusion, which left an innocent public servant neglected as he was gunned down by the North Korean military, while branding this case as a North Korea defection," Chung's statement read.

Rep. Kweon Seong-dong, who formerly led the party, echoed the remarks Saturday by saying that the court "had admitted the liability of the Moon administration which turned a victim into a defector by concealing (the truth) in the murder case" with the arrest of Suh.

Kweon also claimed that Moon was attempting to distance himself from liability in his statement by saying he had "accepted the conclusion" instead of saying that he made the conclusion directly.

This came soon after Kim Ki-yun, the legal representative of the deceased official's brother, said Friday that he would submit Moon's statement as evidence of the alleged cover-up of people concerned, including the arrested presidential aide, over the slain official. Other people concerned, such as ex-Minister Suh Wook and ex-Coast Guard chief Kim Hong-hee, were arrested over the incident earlier in October, but both were released from custody less than a month later.

"Moon on Thursday said facts (regarding the slain official) were impossible to verify, but the Coast Guard defined the case as a defection in its conclusion. How could (the Moon administration) make that conclusion (that Lee had defected) although it was not verifiable?" Kim said. 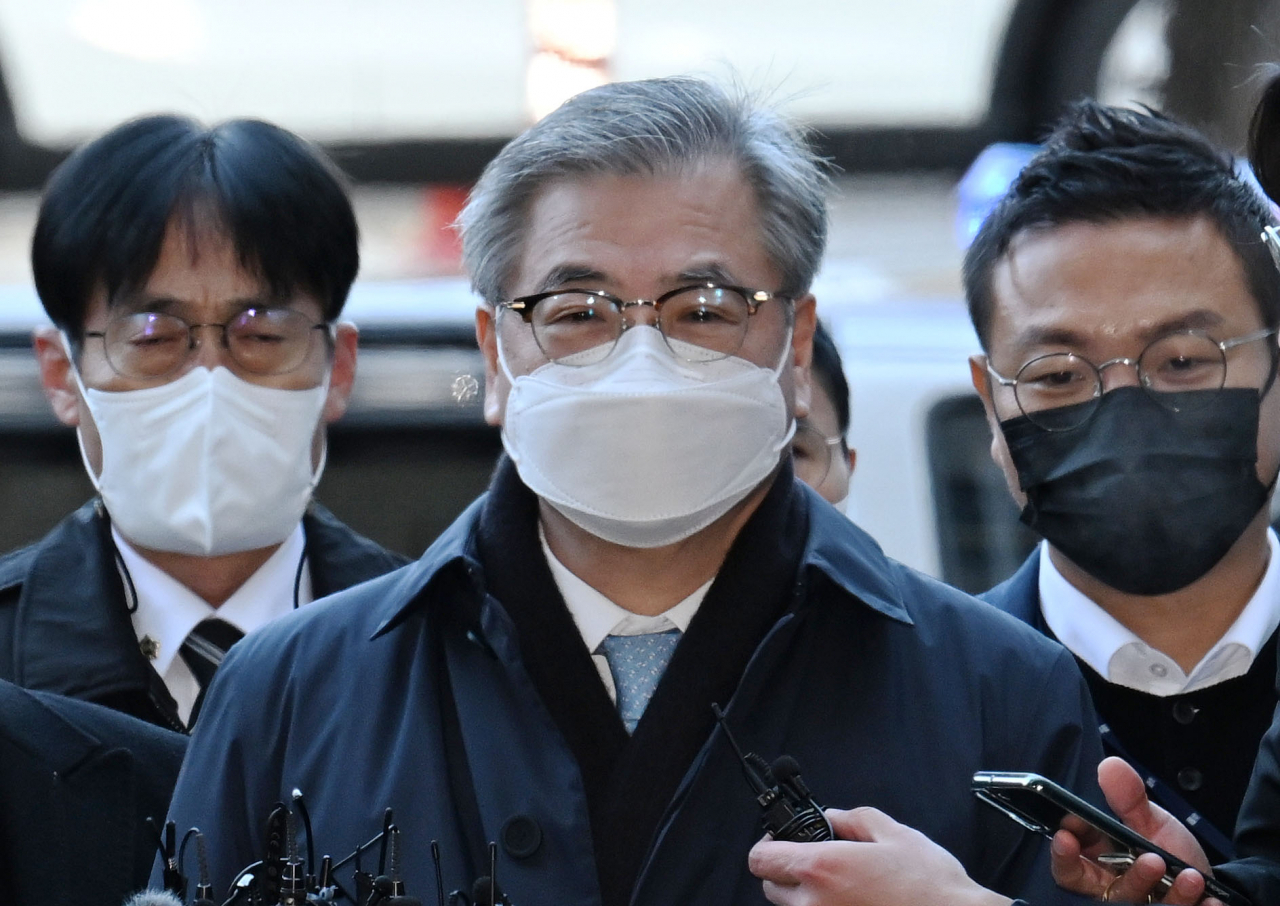 Should the prosecution zero in on Moon, it would be a step forward from its current stance, as an official from the Seoul Central District Prosecutors' Office earlier defined Suh as the top decision maker and the one with the ultimate responsibility in the evidence-destroying case in a briefing on Thursday.

Lee’s bereaved family filed a complaint with the prosecution in June, accusing three presidential aides from the Moon administration including Suh.

Lim Oh-kyung, a spokesperson for the Democratic Party, said, "The investigation of political retaliation, which has been decided according to the regime’s tastes, will eventually be judged in court."

The Democratic Party will defend truth and justice against Yoon Suk-yeol’s investigation of “political retaliation and oppression” of the opposition party, Lim said.

Moon on Sunday called the arrest of Suh "a regrettable event that uproots a valuable asset built with trust" given his long-term contribution to South Korea's alliance with the United States, Korea's hosting of a peaceful Olympics and the historic summit between North Korea and the US.

Im Jong-seok, former chief of staff during Moon's tenure, called the moves "political retaliation by the Yoon Suk-yeol administration," adding the court decision has to do with flaws in the nation's judicial system that can be addressed if people join forces to speak out against the arrest.

Separately, Suh is also being investigated for meddling in the probe of the forced repatriation of two North Korean men in 2019. Suh was then chief of the National Intelligence Service. Suh was succeeded by seasoned politician Park Jie-won, who took charge of the spy agency when the border killing occurred.

The NIS filed complaints against its former chiefs, Suh and Park, in July over the North Korean defector repatriation case and the slain official case, respectively.