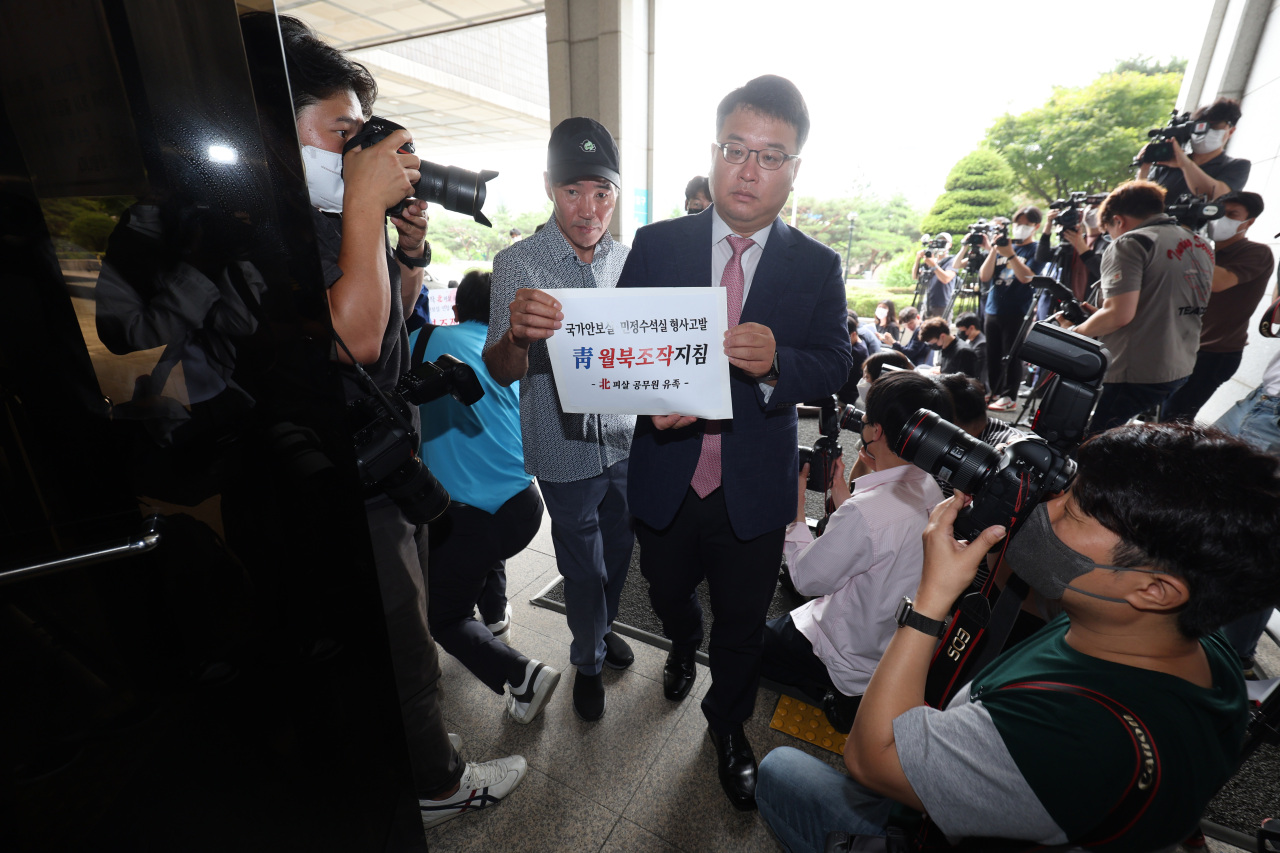 Kim Ki-yun, the attorney representing the bereaved family, holds a press conference outside the Seoul prosecutors’ office on Wednesday. On the left is the official’s older brother, Lee Rae-jin. (Yonhap)
The family of Lee Dae-jun, a South Korean fisheries official killed by North Korean soldiers at sea in 2020, on Wednesday filed a criminal complaint against national security and civil affairs officials of former President Moon Jae-in’s Cheong Wa Dae.

Kim Ki-yun, an attorney working with the family, told reporters outside Seoul Central District Prosecutors’ Office that three ex-Cheong Wa Dae officials were reported to prosecutors for suspicions of obstruction of the execution of official duties, abuse of power and falsifying a public document.

The three officials being accused are Suh Hoon, who helmed the national security office from July 2020 until the end of Moon’s term, and Kim Jong-ho and Lee Kwang-cheol, who were Moon’s secretaries for civil affairs.

Kim said the investigation against Cheong Wa Dae officials could reveal whether they had a role in possibly pressuring the Coast Guard and the Ministry of Defense to characterize Lee as an attempted defector early on without sufficient evidence.

In a fresh development, the Defense Ministry said in a release on June 16 that Cheong Wa Dae had given certain guidelines for public announcements on Lee’s case.

Kim added that it would be “concerning” if the complaint filed Wednesday was handed over to the Corruption Investigation Office for High-ranking Officials, which is headed by a Moon appointee, citing its track record. The CIO, which launched in January last year as the fulfillment of one of Moon’s pledges, has been accused of partisan bias and unauthorized communication surveillance of journalists.

Kim said he plans on meeting with Rep. Woo Sang-ho, the interim chair of the Democratic Party of Korea, to request the opposition’s help in allowing family access to information on Lee’s killing, which is archived as part of Moon’s presidential records.

Gaining access to presidential records requires approval from two-thirds of the National Assembly, the majority of which is controlled by the Democratic Party.

Last month, Lee’s family filed for the release of records with the Presidential Archives, which is due to issue a response Thursday.