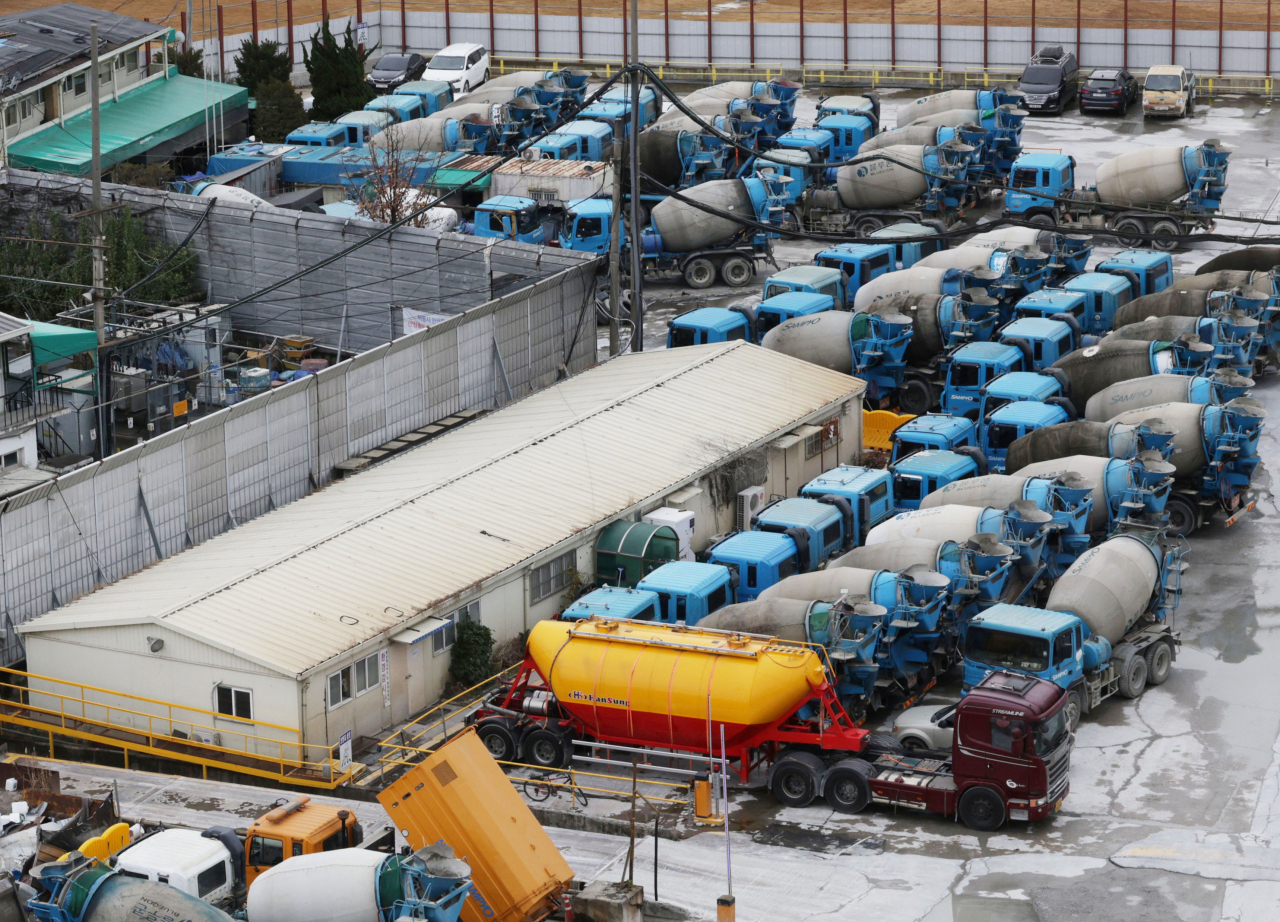 The government on Tuesday ordered some 2,500 cement cargo truck drivers at over 200 companies across the nation to stop their strike and return to work on the sixth day of the walkout, taking an unprecedented move as the supply crisis deepens.

The order came into effect immediately after the Cabinet meeting presided by President Yoon Suk-yeol for cement truckers took place in the morning. Those who refuse to comply with the order will be subject to a suspension of their trucker license, as well as criminal punishment of up to three years of jail or up to a 30 million won ($22,600) fine.

Yoon said at the meeting that construction sites and factories in Asia's fourth-largest economy are grinding to a halt due to the strike, and involve criminal acts, such as union members' assaults on nonparticipants.

"The government hereby issues an order to force cement truckers who refuse their duty to transport to return to the workplace to curb the spread of the economic crisis," Yoon said, reiterating Seoul's rule-of-law approach.

"Taking the livelihoods of ordinary people and the national economy hostage to look out for their own needs is not justifiable."

Those not participating in the walkout have been blocked from transporting materials or goods, and, in some cases, have had metal beads shot at them, according to Yoon.

This is the first time the Korean government has issued such an order since 2004, when the Trucking Transport Business Act went into effect.

The government's right to order trucks to start operating is enshrined in the rules, in case trucking employees refuse to do transport duty "without good cause." 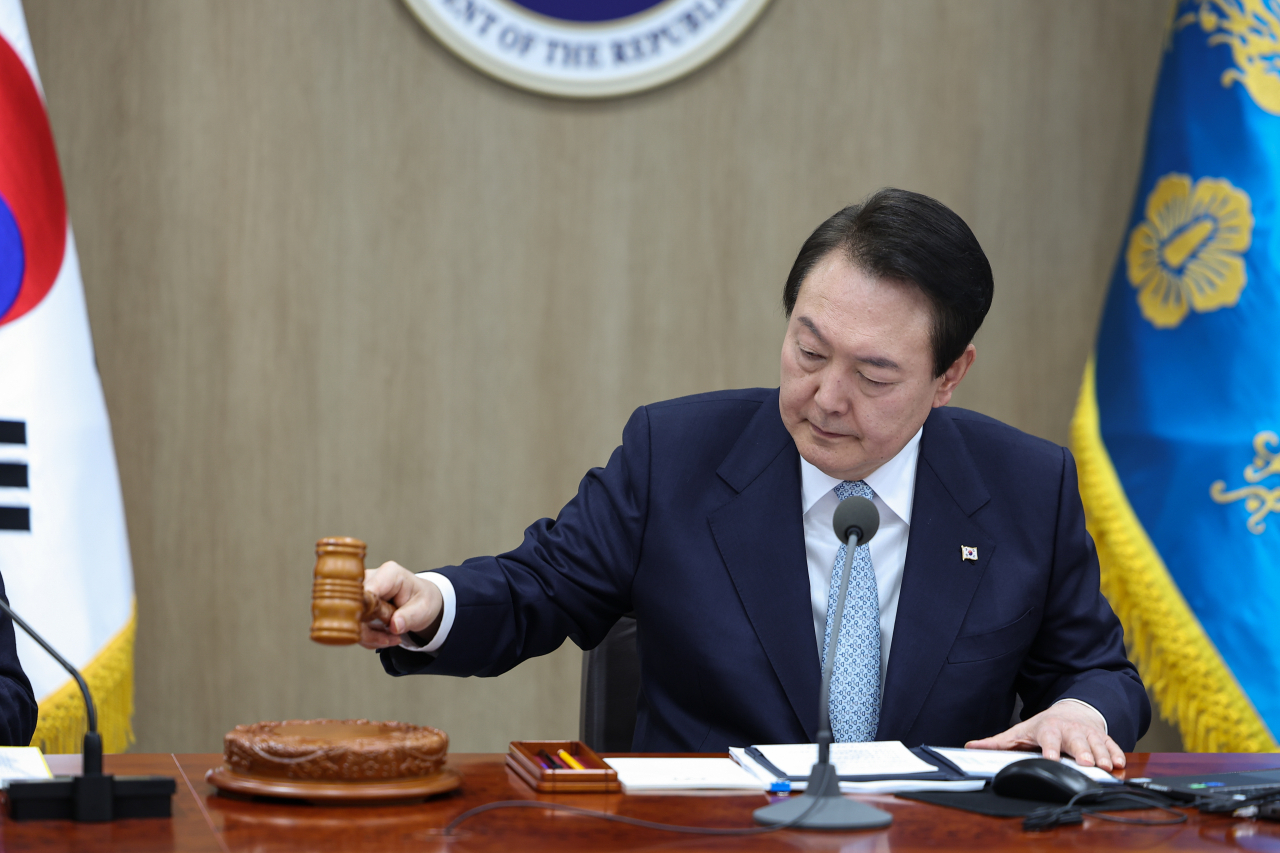 A spokesperson of the presidential office said Yoon hinted at further actions against the striking union during the Cabinet meeting. Quoting Yoon, the spokesperson said "there is no other choice but to take all available action if the labor union continues to put forward unjustified demands."

The strike, however, shows no signs of ending. The truckers union on Tuesday vowed to ramp up its industrial actions in the face of the crackdown, calling the executive order "anticonstitutional." The union also held rallies in 16 locations across Korea, during which some shaved their heads in protest.

Following the Cabinet meeting, the Land Ministry scrambled to execute the orders. Seventy-six field inspection teams, comprising officials from the Land Ministry and local governments, as well as police officers, were mobilized.

Those who received the letter of order will be required to return to work by midnight of the following day. Those who avoid the orders will be subject to harsher penalties, according to Land Minister Won Hee-ryong.

The order will be limited to cement truckers, out of the 7,080 truckers who were staging a walkout as of 9 p.m. Monday. Those engaged in the strike accounted for a third of the members of the Cargo Truckers Solidarity Union.

Cement deliveries have plunged by at least 90 percent compared to normal, while half of the construction sites in the nation have halted due to a lack of ready-mixed concrete, according to Seoul's estimate. Gas stations in the country are beginning to run out of inventory.

The government earlier revealed that the damage caused by the strike amounts to at least 300 billion won ($218 million) each day, and that the level of container traffic had fallen by some 70 percent.

As of Monday, 41 military-purpose container carrier trucks, 69 vehicles, 695 police vehicles, including police cars and motorcycles, and over 8,000 police officers have been deployed across the nation to ease the supply disruption, according to data by the Central Disaster and Safety Countermeasure Headquarters.

Police were also investigating eight cases of alleged sabotage. Police suspected that striking union workers had fired metal beads at cargo trucks in an attempt to disrupt operations. Police in Busan confirmed Tuesday it had found metal beads during a search and seizure of the trucker union's office and vehicles. 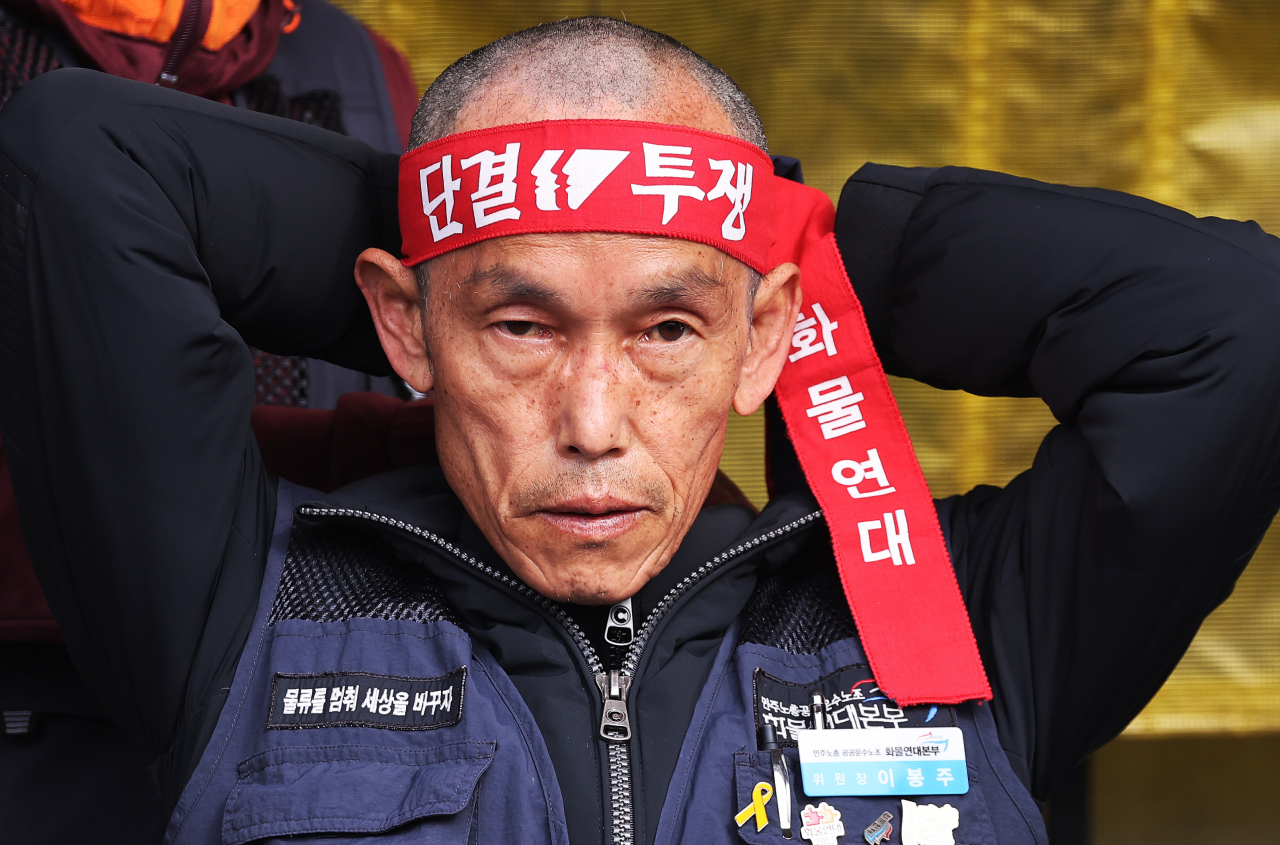 The truckers strike is the second of its kind this year. Truckers have called for a permanent guarantee of minimum freight rates, which is to expire at the end of this year, and wider application of the minimum pay guarantee policy.

Representatives of the truckers union and government officials sat down for talks Monday for two hours to resolve the issue, only to fail to reach a compromise. The two sides are scheduled for the next round of talks Wednesday in Sejong City.

The minimum pay guarantee policy, designed to ensure a safer work environment for sleep-deprived drivers, has been temporarily effective since 2020 until 2022 for cement and container truckers.

The truckers union staged a walkout in June to call for an extension of the policy, reaching a compromise that the temporary policy be extended by three more years for cement and container truckers. A revision of the Trucking Transport Business Act is required for the extension.

With the deadline approaching, the union is pushing for more than previously agreed, calling for the same minimum rate to be applied permanently to those carrying steel, cars, hazardous substances, grains, foodstuff and parcels.

The government said in a joint statement Tuesday that it will do its utmost for the swift passage of the revision bill on the extended pay guarantee for cement and container truckers, urging the National Assembly to cooperate. Land Minister Won, however, ruled out the possibility of further negotiations.

"(The truckers union) unilaterally refused to do their transport duty as the current minimum pay guarantee policy was under evaluation and the talks with the parliament were underway," Won said in a briefing. "This is unlikely an issue of workers' rights or working conditions."