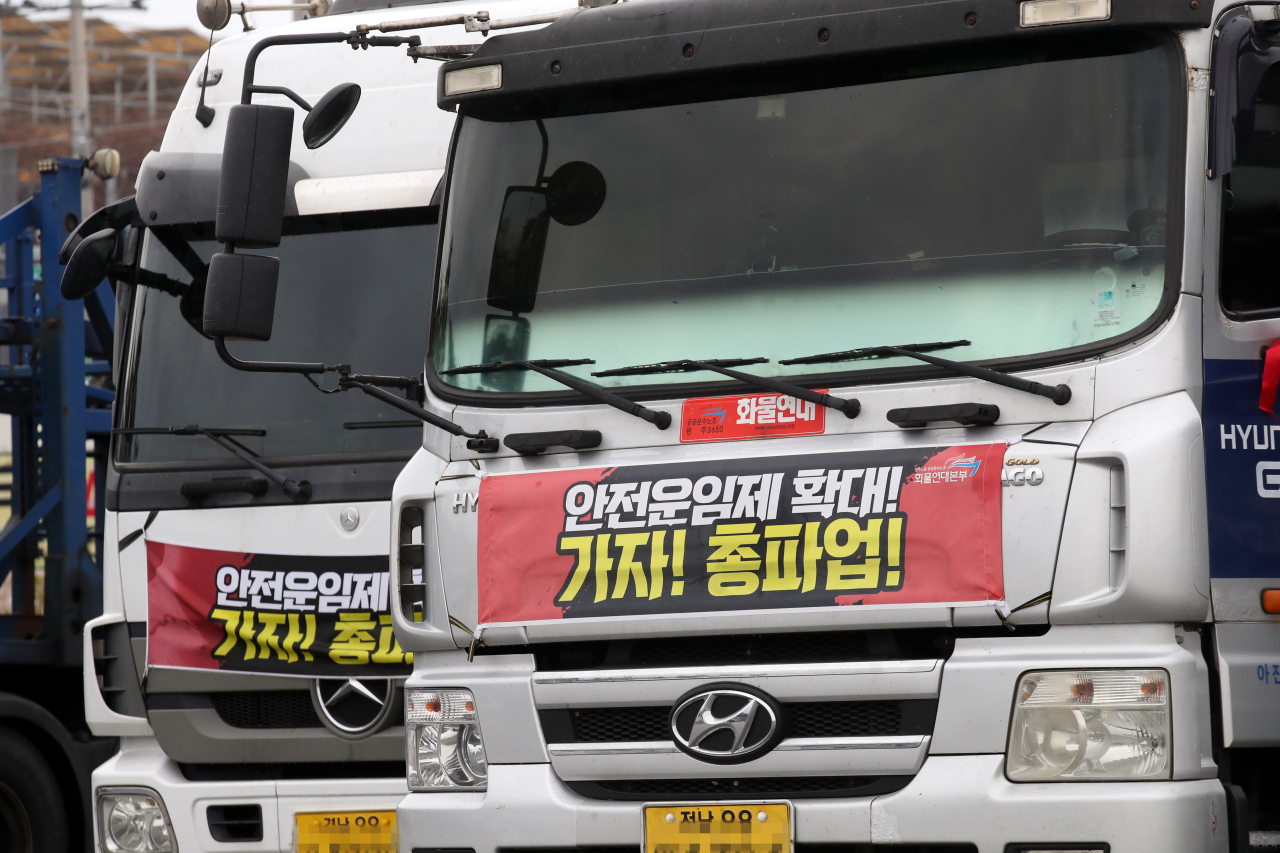 President Yoon Suk-yeol could issue an order to force truckers to return to the workplace, as he pledged Monday to take a hard-line stance on their strike, blasting them for causing serious supply chain disruptions nationwide.

Yoon's office said in a statement that a Cabinet meeting will take place Tuesday to review the feasibility of the order, which has never been issued in Korea's history. Failure to comply with the order would be subject to a punishment of at most three years in jail or a fine of at most 30 million won ($22,400).

"The rule of law must stand in any industrial conflict," Yoon was quoted as saying by the presidential office. "It is crucial that any violation from either side of the labor union or the management must be corrected by law and principle."

The remark came Monday as the government and the Cargo Truckers Solidarity Union, an organization representing freight truckers, held their first talks for two hours at 2 p.m. since the launch of a second strike this year in the government complex in Sejong in the afternoon.

The union had urged the government to permanently guarantee a minimum freight rate for truckers carrying cement and containers, effective temporarily since 2020, and called on a wider range of truckers to be eligible for the minimum pay guarantee policy to ensure a safer work environment for sleep-deprived drivers.

The walkout of truckers marks the second such strike this year, following one in June that the government estimated had caused more than 1.6 trillion won in losses across industries due to disruptions in the delivery of raw materials and goods, as well as higher logistics costs.

Following the eight-day strike, the government and union agreed on a three-year extension to minimum pay guarantees for the cement and container freight truckers, which was to expire by the end of this year.

But as the second round of the strike kicked off Thursday with the expiration of minimum pay guarantee policy drawing to a close, speculation that the order to return to work could be issued for the first time emerged from the presidential office. 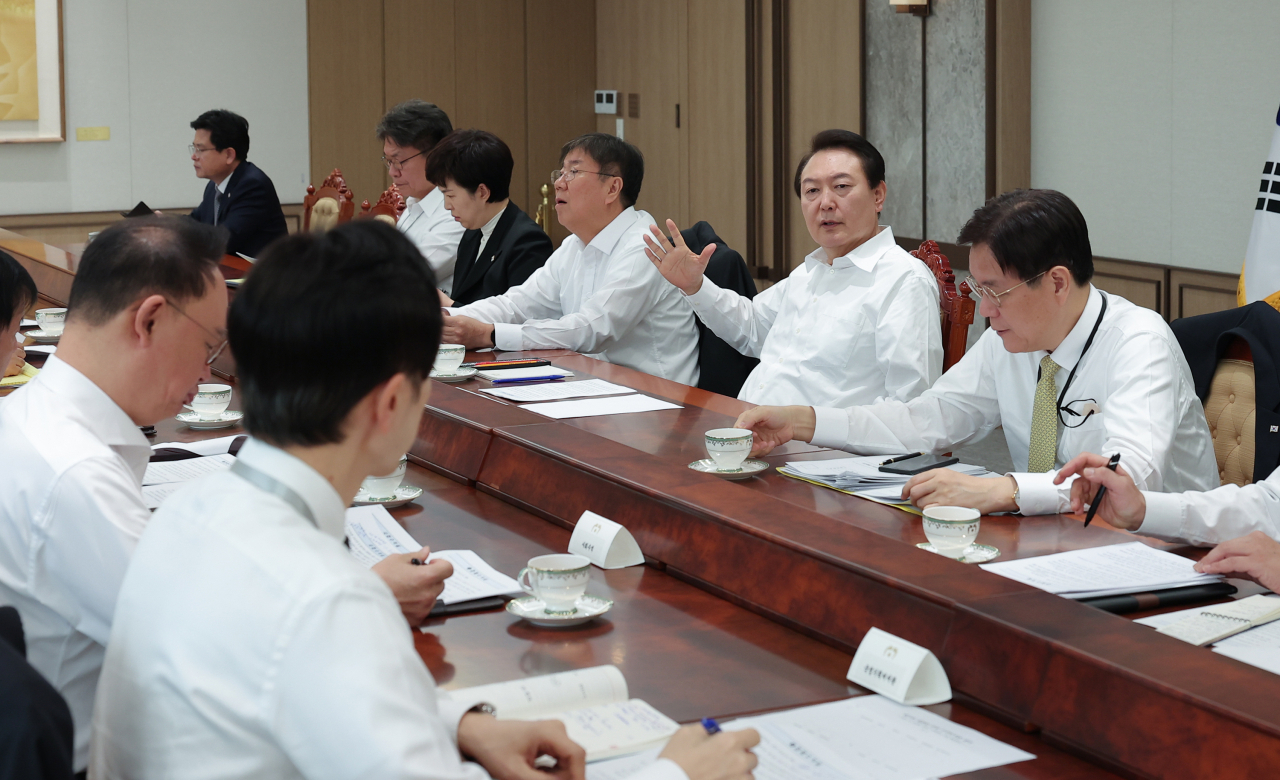 President Yoon Suk-yeol (second from right, opposite side) speaks during a meeting with presidential office secretaries at his office in Yongsan-gu district on Monday. (The Presidential Office)

The conflict between the government and labor union peaked over the weekend.

The government ramped up its level of caution to the highest level on a scale that goes to four at 9 a.m. Monday, which led to a convention of the Central Disaster and Safety Countermeasure Headquarters -- a pangovernmental meeting presided over by Interior Minister Lee Sang-min.

Lee described the strike as truckers' "collective refusal" to serve their transport work duty, estimating losses incurred due to the logistics disruption to amount to 300 billion won on a daily basis.

Lee added an order would be issued by abiding by the Trucking Transport Business Act, on the premise that the strike poses a serious threat to Asia's fourth-largest economy in a range of industries including steel mills, construction sites and vehicle factories, among others.

"The government will continue its conversation with the labor union, but we are determined to take stern actions by law and principle, such as violators' arrest and protection of trucks, in case of any logistics disruptions or menacing acts," Lee said at the meeting Monday morning.

Over the past four days, the shipment of containers in the nation amounted to less than 30 percent of the normal level, according to the government data.

The national police chief, Yoon Hee-keun, echoed the remarks, stressing "zero tolerance" for any breach of law, adding the police agency has deployed police resources such as police cars and motorcycles, against the union's assault on nonunion members.

The meeting also signaled countermeasures to cushion the impact of the strike such as emergency means of freight transport jointly overseen by the Oceans Ministry and the Industry Ministry.

Some 22,000 truckers are estimated to have joined the strike, with some 9,600 of them walking out, according to the union's own estimate.

The Korean Confederation of Trade Unions, under which the cargo truckers' union stands, criticized the government for attempts to clamp down on cargo truckers in a statement Monday.

The KCTU also called for an apology from the government for taking the situation to the extreme, and the application of a permanent minimum pay guarantee policy to other truckers carrying steel, cars, hazardous substance, grains, feedstuff and parcels.