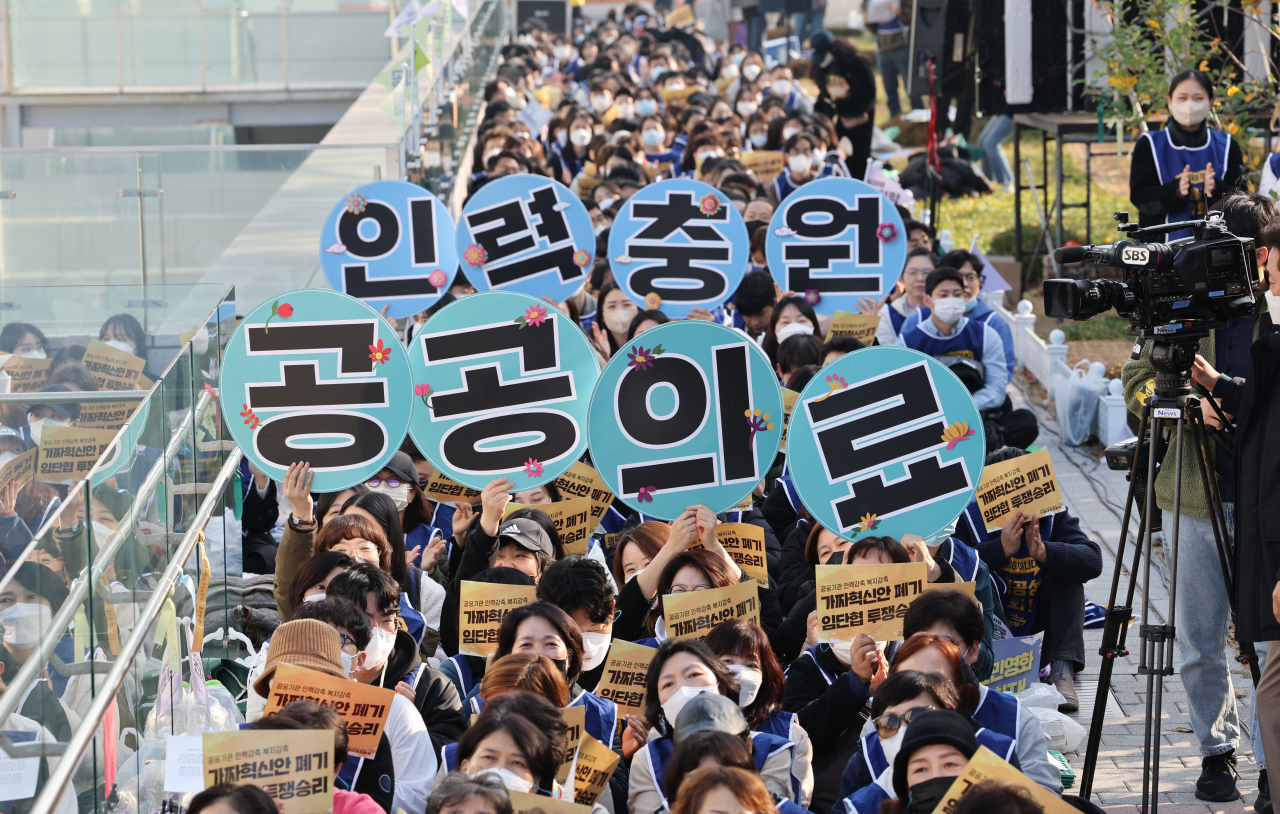 Unionized workers from various sectors including transport, education to medical are set to stage strikes nationwide this week to demand the government stop privatizing state-run companies and raise wages, fueling concerns that it would cause public inconveniences and supply disruptions.

Tension racheted up as the government and the ruling party countered labor groups' strike plans on Wednesday, denouncing them as "selfish profit-seeking plans" which threaten the safety of the state and the strength of the economy.

"If the cargo union pushes ahead with the strike, it will have to take full legal responsibility for all illegal activities," said Rep. Joo.

Following Tuesday's general strike announcement by the Korean Confederation of Trade Unions, one of two major umbrella labor groups in South Korea, the National Health Insurance Service branch and a union chapter representing medical workers under the KCTU on Wednesday launched the strike.

The NHIS branch began their protest in front of its headquarters in Wonju, Gangwon Province, and about 1,000 union members marched through downtown, demanding regular job positions for temporary workers and a pay raise.

The Cargo Truckers Solidarity plans to go on a general strike from Thursday, demanding the government continue to push for a safe trucking freight rates system. The safe trucking freight rates system, which aims to prevent drivers from overwork and overloading, was originally a temporary policy scheduled until the end of this year. The government and the ruling party on Tuesday proposed a three-year extension to persuade the union to back down, but the union is calling for the expansion and continuance of the system.

Meanwhile, a union representing irregular workers at schools announced they would go on a general strike at 15,000 schools nationwide on Friday, demanding comprehensive measures to address occupational diseases -- such as lung cancer linked to the school cafeteria environment -- and reforming the wage system. The union will go on strike again in the 2023 spring semester if there is no response from authorities after this strike.

The railway union also plans to begin what they said would be a law-abiding protest at 9 a.m. on Thursday, protesting against the Yoon Suk-yeol government's policy to privatize railway enterprises and reduce the quota. If there is no change in the government's position even after the protest, the union said it will kick off a general strike on Dec. 2.