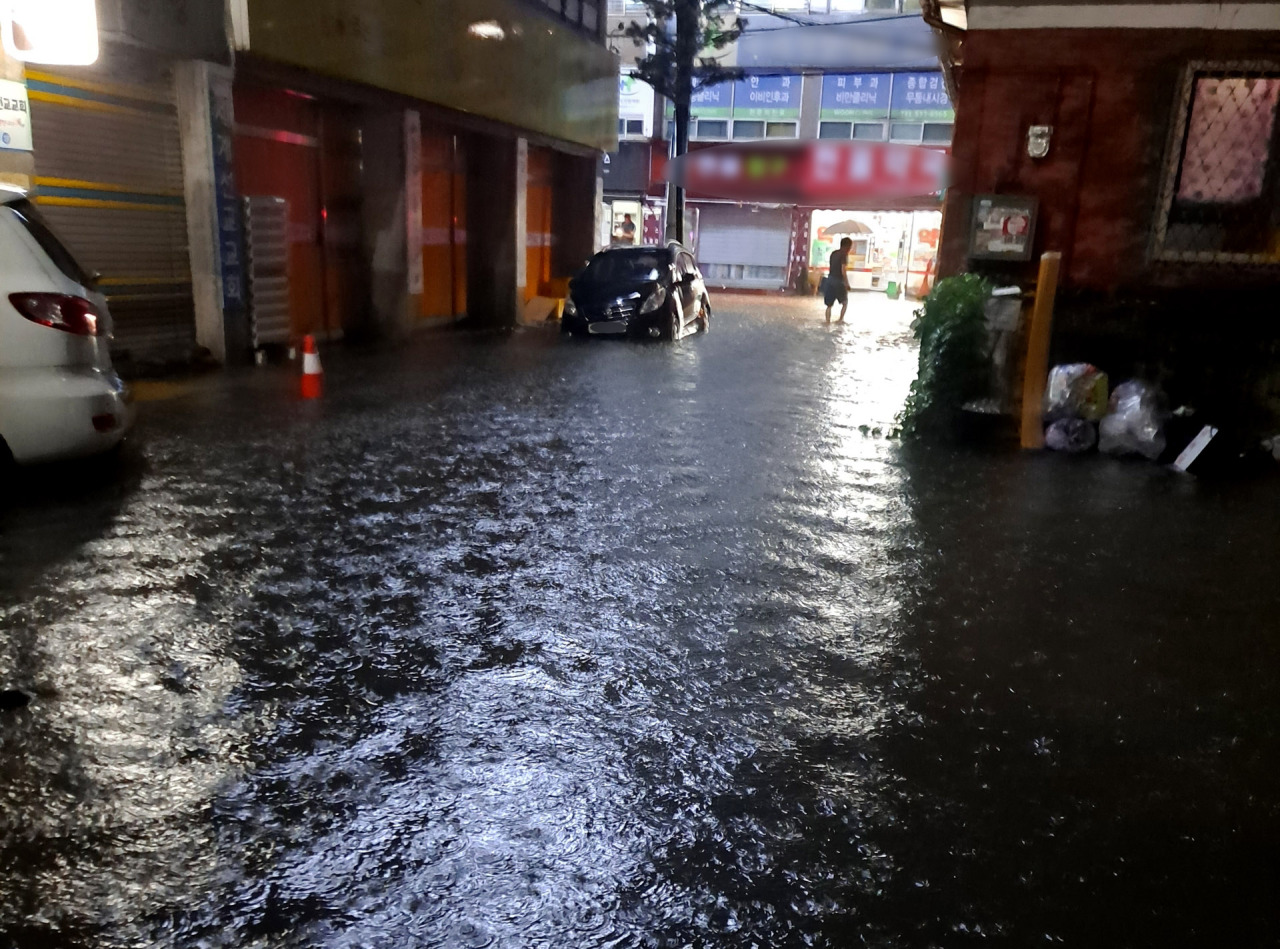 A man walking through a flooded street in Incheon, Tuesday. (Yonhap)

Heavy rainfall is expected to continue throughout Friday in Seoul and across other already-battered cities in the country, the Korea Meteorological Administration said Tuesday.

The state-run agency’s warning put local authorities on alert for the possibility of additional damages after torrential downpour sparked flash floods and landslides overnight Monday, resulting in at least eight deaths. Seoul saw the largest amount of precipitation in a day since weather record-keeping began in 1907.

Rainfall will be concentrated in the central region from Tuesday to Thursday, as two large air masses -- one cold and dry coming from the north and the other warm and humid from the south -- collide above the midsection of South Korea. The stagnant front formed by this is expected to affect the southern region on Friday.

“We need to be thoroughly prepared for potential damage that could be caused by additional rain in the Seoul metropolitan area and Gangwon Province and pay attention to facility management and danger stemming from gusts, thunder and lightning,” the KMA said.

The office called for extra caution, in particular, on softened ground from continued rain.

“Those in areas where landslides are expected should move to a safe place as continuous rain has weakened the ground.” There is a high possibility of collapses occurring in construction sites and on slopes, it added.

The KMA said the severity of the rain could vary significantly depending on the location, adding that the strong, stagnant front formed above the Seoul area, at the edge of an anticyclone in the North Pacific Ocean.

“Strong rain clouds are (usually) long from east to west and narrow from north to south, so the difference in the amount of rainfall by region will be large,” it said.

From Monday till Tuesday morning, Seoul and Gyeonggi Province were hit the hardest by it, with more than 400 millimeters of rain overnight, according to the agency.

Dongjak-gu in Seoul received up to 381.5 millimeters of rain on Monday, an all-time daily high since Seoul’s official weather records began in 1907. The previous record was reached in 1920 when 354.7 millimeters fell in a day over Seoul.

Soyang Dam, Korea’s largest dam in Chuncheon, Gangwon Province, was to open the floodgates and release water on Wednesday for the first time in two years due to the torrential rain.