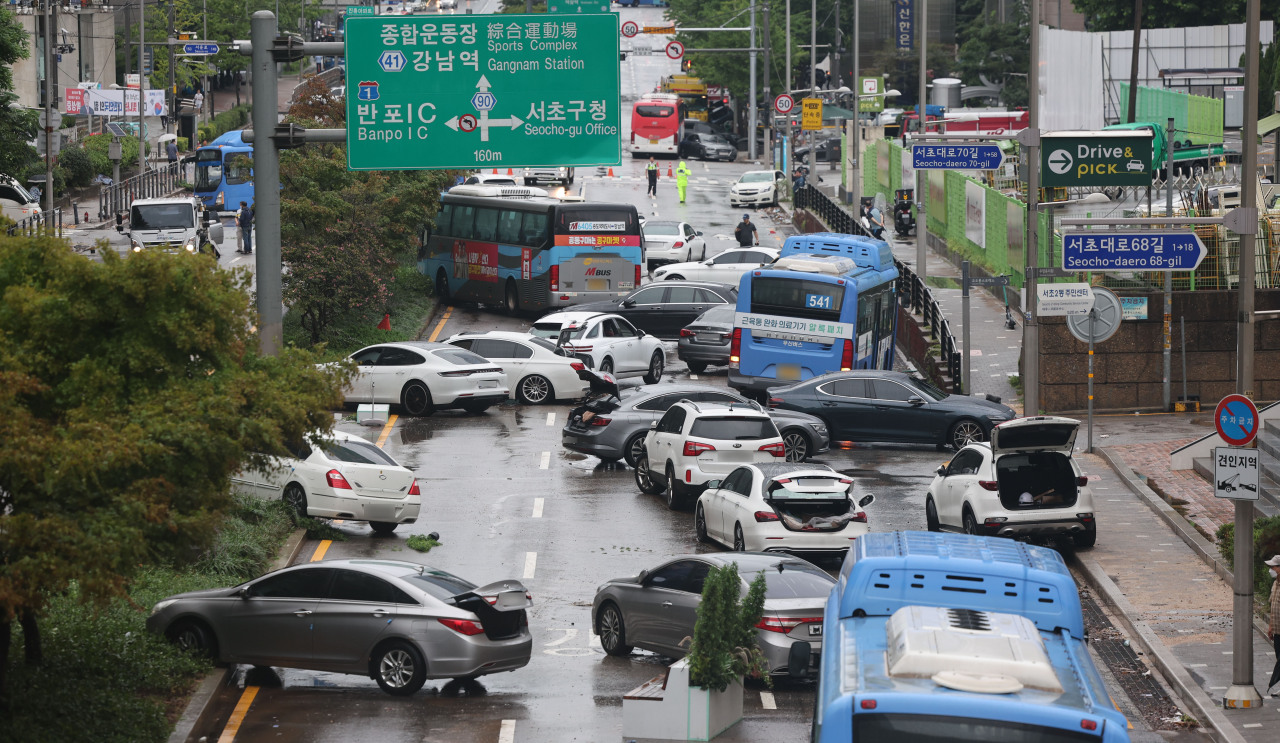 On Tuesday morning, vehicles that were submerged by heavy rain the previous day in the Seocho-daero area in front of Jinheung Apartment in Seocho-gu, Seoul, reemerge after evaporation. (Yonhap) 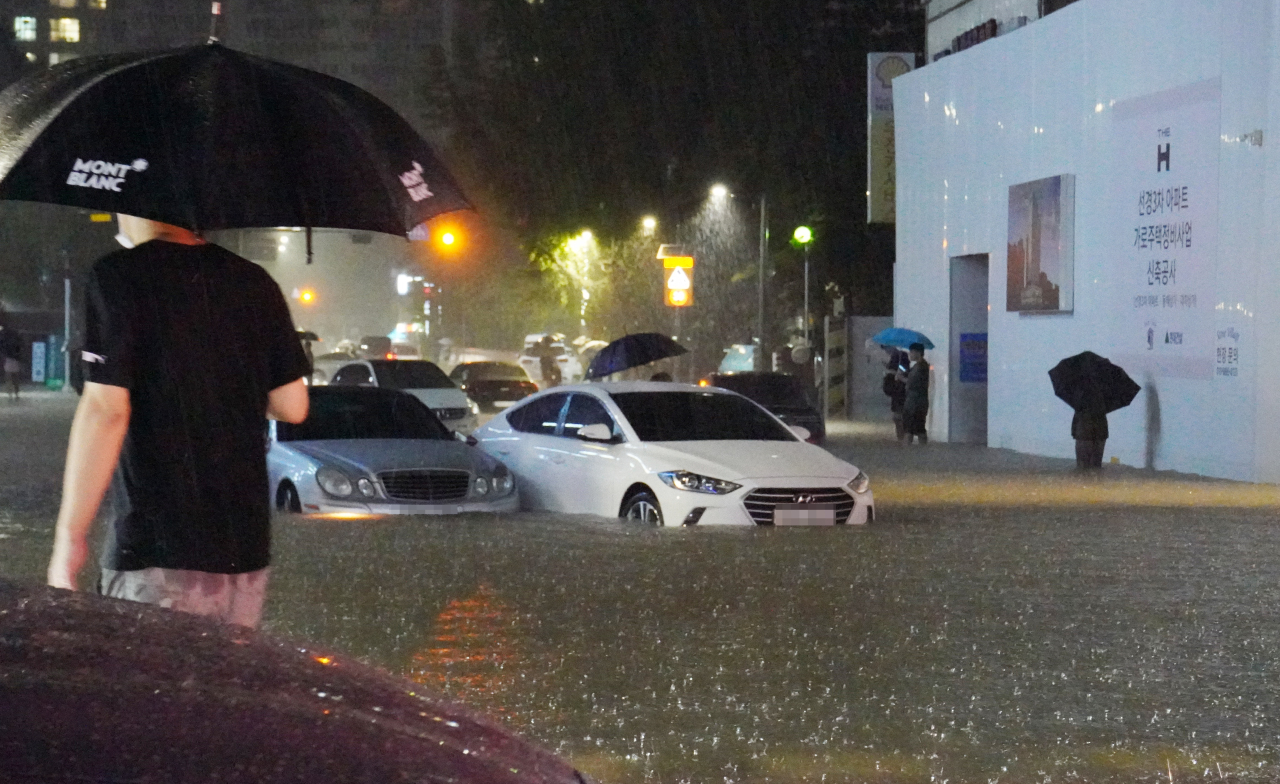 Roads and sidewalks near Eunma Apartment in Daechi-dong, Gangnam-gu, Seoul were submerged due to heavy rain on Monday night. (Yonhap)
Record-setting heavy rain hit Seoul and surrounding areas Monday night and Tuesday morning, wreaking havoc across the region. The rainfall -- the highest amount recorded in Seoul in 115 years -- left several dead and displaced hundreds. Severe flooding occurred in many parts of the capital, leading to significant infrastructure and property damage.

Heavy rain is expected to continue until Friday in Seoul and throughout the capital region, the Korea Meteorological Administration said Tuesday.

However, it will not be included in the official record because the data came from the observation of a regional office of the Korea Meteorological Administration in Sindaebang-dong, Dongjak-gu. The representative weather value for the city comes from the Seoul Weather Station in Songwol-dong, Jongno-gu.

This heavy rain was accompanied by lightning, which struck the metropolitan area more than 2,000 times, the previous night.

In Gwanak-gu, southern Seoul, three people -- a 13-year-old and two adults in their 40s -- died after they were trapped in a semi-basement apartment.

A 60-something district office employee died while cleaning up tree branches that had fallen in the storm. The cause of death is thought to be electrocution.

There were 391 people displaced by flooding in Seoul, Incheon and Gyeonggi Province as of 1 p.m. on Tuesday. They were provided shelter at nearby schools and community centers.

A total of 741 houses and shopping malls were flooded while retaining walls collapsed in three places in Seoul, Incheon, Gangwon Province and Gyeonggi Province as of 1 p.m.

More than 1,000 cases of vehicle flooding have been reported as of Tuesday morning, according to figures from the insurance industry.

Trains were halted across the city as rainwater flooded subway stations and tracks. As flooding increased, traffic was ground to a halt and people took to social media to post photos of flood damage in real time.

Subway flooding was concentrated on routes south of the Han River, including Lines 2, 7 and 9. 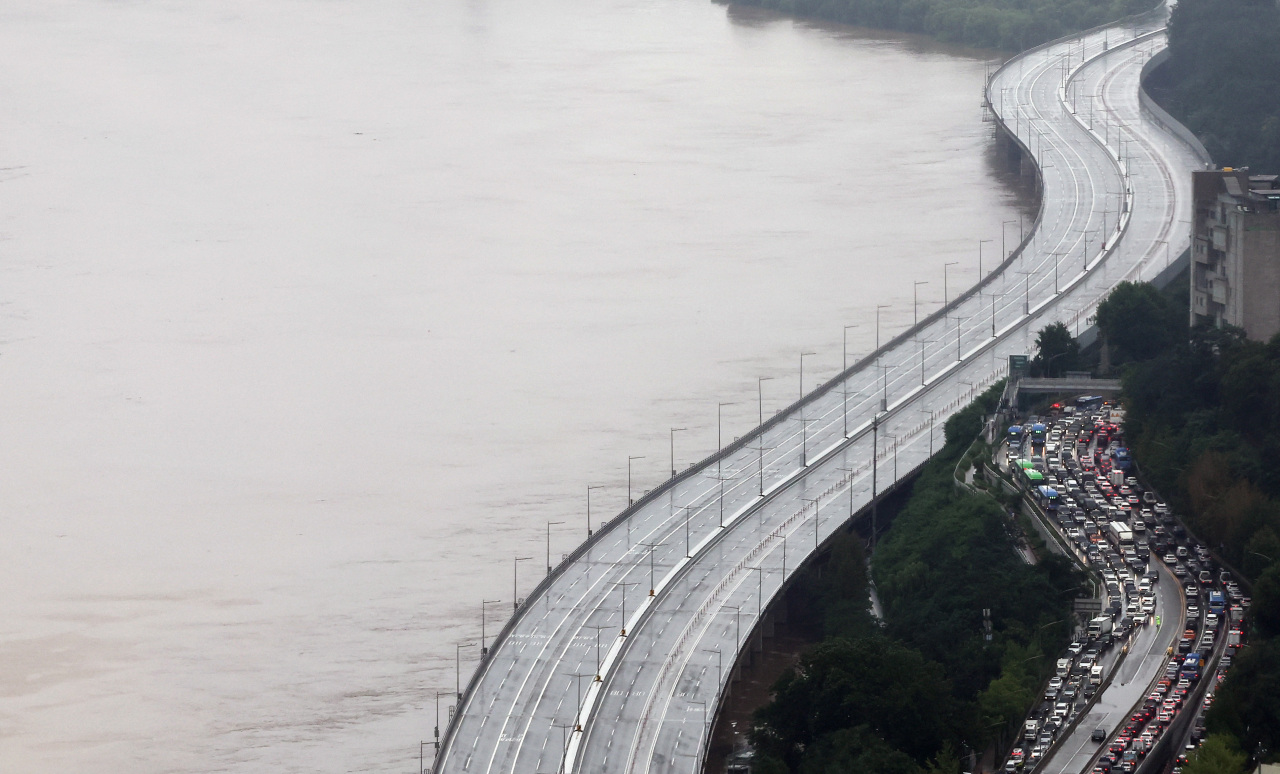 Service has been restored to all sections of Line Nos. 1 through 8. The Ui New Line and Sillim Line are also operating normally as of this morning. Subway Line No. 9 resumed the operation at 2 p.m.

Major roads were blocked by heavy rains in the Seoul metropolitan area beginning Tuesday morning, causing severe traffic congestion in various places. Some urban highways and bridges are under control, as the city is used to managing the water level of the Han River due to torrential rains.

The Ministry of the Interior and Safety upgraded the Central Disaster and Safety level from the second to the third stage, and raised the crisis alert level from “warning” to “serious.”

President Yoon Suk-yeol instructed public and private workplaces to encourage employees to adjust their commuting hours, according to the presidential office.

At 9:30 a.m. President Yoon visited the disaster safety situation room at the Seoul Government Complex to preside over an emergency meeting and check on the heavy rain damage situation.

Regarding the torrential rain, Yoon told officials, “Above all, we should not lose lives due to man-made disasters.”

Before attending the emergency meeting, Yoon stayed at home and checked on the heavy rain situation with Prime Minister Han Duck-soo, Minister Lee Sang-min and Seoul Mayor Oh Se-hoon over the phone.

According to reports, Yoon tried to visit the Central Disaster and Safety Headquarters in Gwanghwamun, central Seoul, and other sites damaged by rain, but was stranded because the roads around his residence in Seocho-gu were flooded. Using a helicopter was considered, but was decided against in consideration of safety and noise.

Main opposition Democratic Party lawmakers raised the issue of the relocation of the president’s office over President Yoon’s receiving a report from Prime Minister Han and giving instructions over the phone in the emergency situation.

Rep. Kang Hoon-sik said on his Facebook on Monday, “The president, who should be the general manager and disaster manager, was unable to come to work because of rain during a national disaster.”

“Only three months ago, he was confident that there was no problem with national security when he moved Cheong Wa Dae to the Yongsan office,” he said. “If there’s an emergency in the future, how can you approach the bunker and act as a control tower?”

Rep. Ko Min-jung of the Democratic Party of Korea also criticized President Yoon giving phone instructions from home on a day of record-breaking heavy rain and flooding in Seoul and surrounding areas.

Ko wrote in a Facebook post, “The presidential residence and the presidential office should be close to each other because of concerns about such an emergency. The president, not the prime minister, should personally visit a crisis management center in an underground bunker, be briefed and check on the overall situation, but he is invisible.”