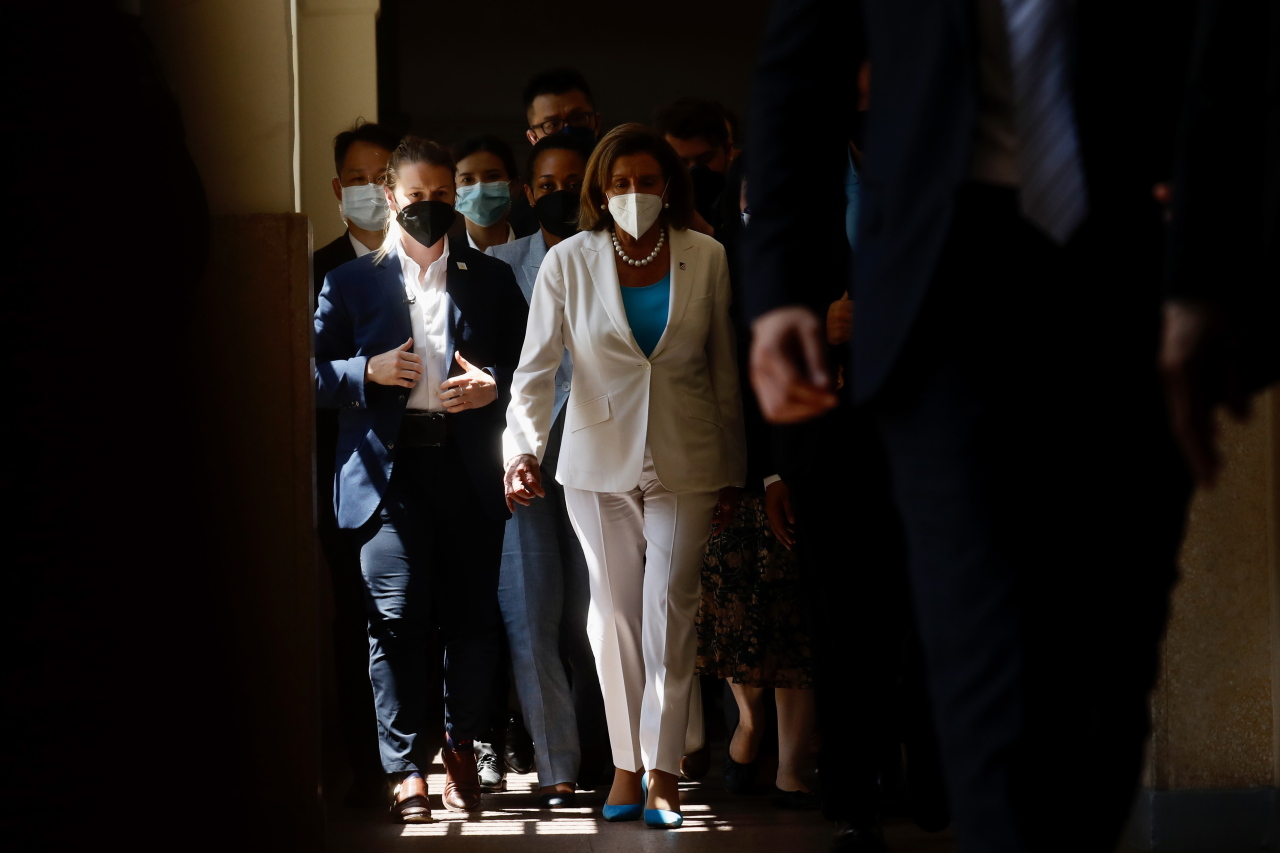 US House Speaker Nancy Pelosi walks after leaving the Legislative Yuan after her meeting with Taiwanese legislators in Taipei, Taiwan, 03 August 2022. Pelosi began her visit in Taiwan, the highest ranking US official to visit the island in 25 years, despite strong warnings of military action from China against the visit. (EPA)
US House Speaker Nancy Pelosi is to meet with ranking South Korean officials Thursday, amid US-China tensions heightened by her trip to Taiwan.

Pelosi’s stop in Taiwan sparked backlash and military actions from China. North Korea and Russia also pitched in and launched a blistering criticism of the US, showing a glimpse of the regional security complex that will be compounded by the visit.

South Korea is the fourth leg of the US congressional delegation’s trip to the Indo-Pacific region after visiting Singapore, Malaysia and Taiwan from Monday to Wednesday.

S.Korea’s cautious stance
The South Korean presidential office said Wednesday that it welcomed Pelosi’s visit to South Korea. The US congressional delegation led by Pelosi is set to arrive in Seoul Wednesday night.

But President Yoon Suk-yeol’s office took a cautious stance when asked about the South Korean government’s position on her stop in Taipei, which has aggravated tensions between the US and China.

“Our position is that we will continue close communications over pending issues with the concerned countries in the region under the banner of maintaining regional peace and stability through dialogue and cooperation,” a senior presidential official, who wished to remain anonymous, said during a closed-door briefing. “We hope that the House Speaker’s East Asia tour will be smoothly completed as scheduled.”

Kim and Pelosi are scheduled to hold talks and a joint news conference Thursday, according to Rep. Kim’s office. The two plan to meet for around 50 minutes and discuss a wide range of issues including security in the Indo-Pacific region, economic cooperation and climate crisis.

But the South Korean presidential office had not scheduled a meeting between President Yoon and Pelosi, given that Yoon’s five-day vacation from Monday to Friday overlaps with her visit to Seoul, according to the unnamed official.

Pelosi -- who is the second in the line of succession to the US presidency after the vice president --- does not have any plans to meet other senior presidential officials as of Wednesday noon.

South Korea is notably the only country Pelosi is visiting that has not set up a meeting between her and the head of state. Pelosi held talks with Singapore’s Prime Minister Lee Hsien Loong and Malaysian Prime Minister Ismail Sabri earlier this week.

The US House speaker also met Taiwanese president Tsai Ing-wen Wednesday morning during her trip to Taipei, which began Tuesday.

“Today, the world faces a choice between democracy and autocracy. America‘s determination to preserve democracy here in Taiwan and around the world remains ironclad,” Pelosi said Wednesday, after receiving the Order of Propitious Clouds with Special Grand Cordon from Tsai. “And now more than ever, America’s solidarity with Taiwan is crucial. And that is the message we are bringing here today.”

Pelosi’s trip to Taiwan
Pelosi’s visit made her the highest-ranking US-elected official to visit Taiwan in 25 years since then-House Speaker Newt Gingrich in 1997.

Pelosi’s stop in Taipei -- which came at a low point in US-China relations -- elicited strong backlash from China, although the White House sought to blunt China’s rage.

US National Security Council spokesperson John Kirby reiterated Monday that the Biden administration’s policy is still in line with the One China principle, underscoring that Pelosi’s visit is “completely consistent with what’s been done in the past and certainly not at all a statement about any change to American policy.”

Despite repeated calls from the US, China’s Ministry of National Defense vehemently and immediately reacted to Pelosi’s stop in Taipei and warned of military actions.

“The Chinese People’s Liberation Army is on high alert and will take a series of targeted military operations in response to resolutely safeguard China’s sovereignty and territorial integrity,” spokesperson Wu Qian said Tuesday in an English-language statement.

China also announced that it will conduct a series of live-fire military drills from Thursday to Sunday in six exclusion zones encircling Taiwan in a countermove to the visit, according to a statement released Tuesday by the state-run Xinhua news agency.

The united response is in line with a recent move to ramp up a trilateral coalition among the three countries, which has compounded the evolving security dynamics in the Indo-Pacific region.

Russia’s Ministry of Foreign Affairs Tuesday dismissed the US House speaker’s visit to the island as a “clear provocation in keeping with the US’ aggressive policy of containment of the PRC.” PRC refers to China’s official name, the People’s Republic of China.

“We call on Washington to refrain from actions undermining regional stability and international security,” the Russian Foreign Ministry said, expressing its unchanged endorsement of the One China policy.

“We vehemently denounce any external force’s interference in the issue of Taiwan,” the ministry spokesperson said on the “recent junket” to Taiwan by Pelosi.

“The current situation clearly shows that the US shameless interference in internal affairs of other countries and its schemes for intentional political and military provocations are, indeed, the root of evil that undermines the regional peace and security.”

The North Korean Foreign Ministry underscored that the “US schemes to hamper the growth and development of China, and its efforts to accomplish the cause of reunification (of Taiwan and China) is bound to be frustrated.”

Pelosi’s office said Sunday that the congressional delegation’s trip to the Indo-Pacific region, including Japan, aims to “reaffirm America’s strong and unshakable commitment” to the US allies and partners.

The Asian tour also would offer opportunities to discuss how the US and like-minded countries in the region further advance their interests and values, including peace and security, economic growth and trade, as well as human rights and democratic governance, the office added.