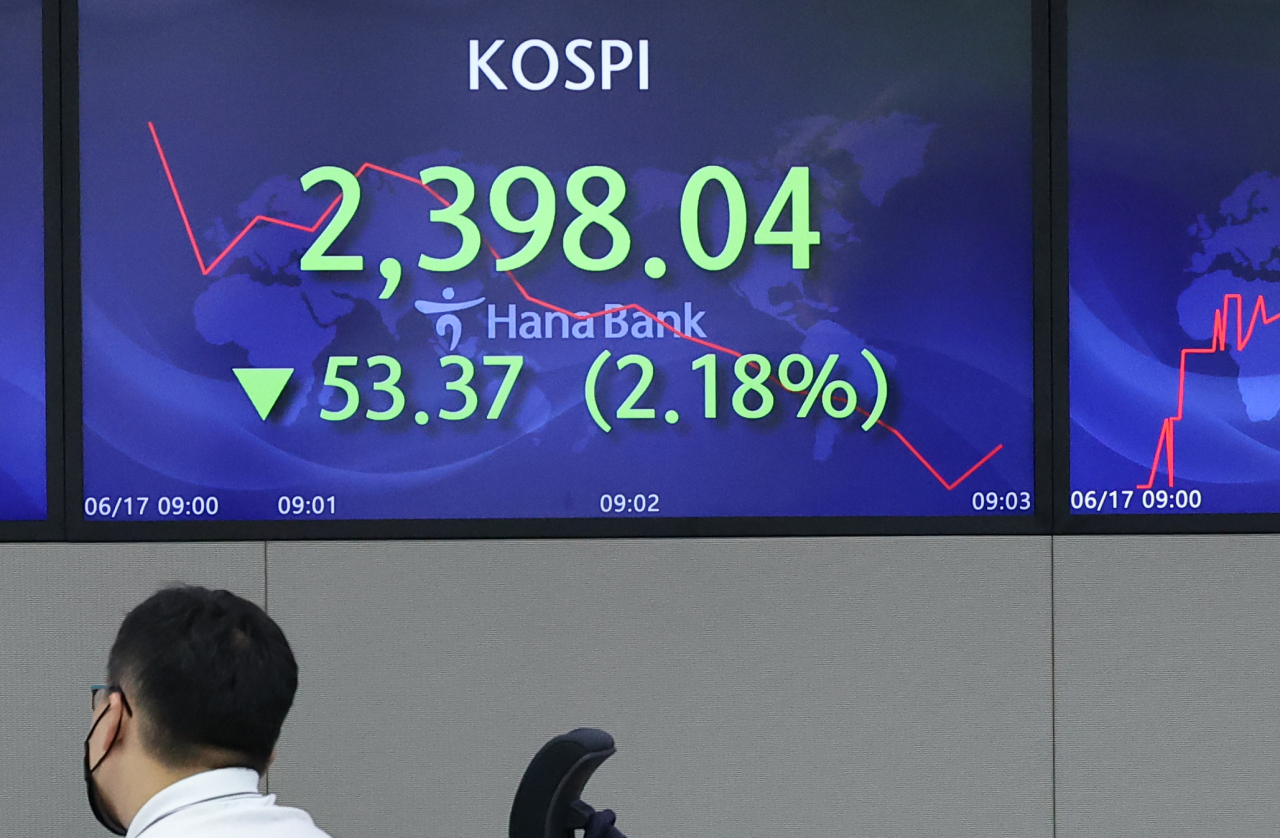 The bourse’s retreat was affected by the US Fed’s latest move to raise its interest rates by three-quarters of a percentage point earlier this week – the largest rate hike since 1994 – to tame its sharpest inflation since 1981. The US’ Fed’s latest series of rate hikes coupled with the prolonged strong dollar trend has been pushing foreign investors to sell Korean stocks.

“The latest stock slump is due to growing concerns of monetary tightening to tame growing inflationary pressure,” Kim Dae-jun, an analyst at Korea Investment & Securities said.

“And the monetary tightening is projected to continue for the time being while the strong dollar trend is likely to fuel foreigners’ offloading of Korean shares,” he added.

Most big cap shares traded lower in the early morning, with market bellwether Samsung Electronics breaching the 60,000-won threshold for the first time since Nov. 4, 2020 and trading at 59,700 won. Samsung shares had hovered around 67,000 won last month, but have continued to fall since, hit by the global supply bottleneck and the supply chain issues surrounding memory chips.

“At the moment, it is difficult to have expectations for smartphones and televisions,” Shinhan Investment Analyst Choi Do-yeon said.

“Stock market observers are closely monitoring the memory chip cycle, but in the short-term, there are uncertainties surrounding both chip supply and demand.”

The secondary, tech-heavy Kosdaq also fell below the 790-point threshold in 20 months by opening 1.77 percent lower from the previous closing at 787.87.

The won-dollar exchange rate hit as low as 1,290 won against the US greenback in the morning, on the back of worries surrounding the growing views of higher probability of recession in the US. But some experts brushed off concerns of a weaker won.

“The won-dollar exchange rate has been affected by investors’ sentiment, which is to avoid risks amid concerns of a possible recession,” said Woori Bank analyst Min Gyeong-won.

“But its surge will be contained by the Korean government’s cautious measures,” he said.