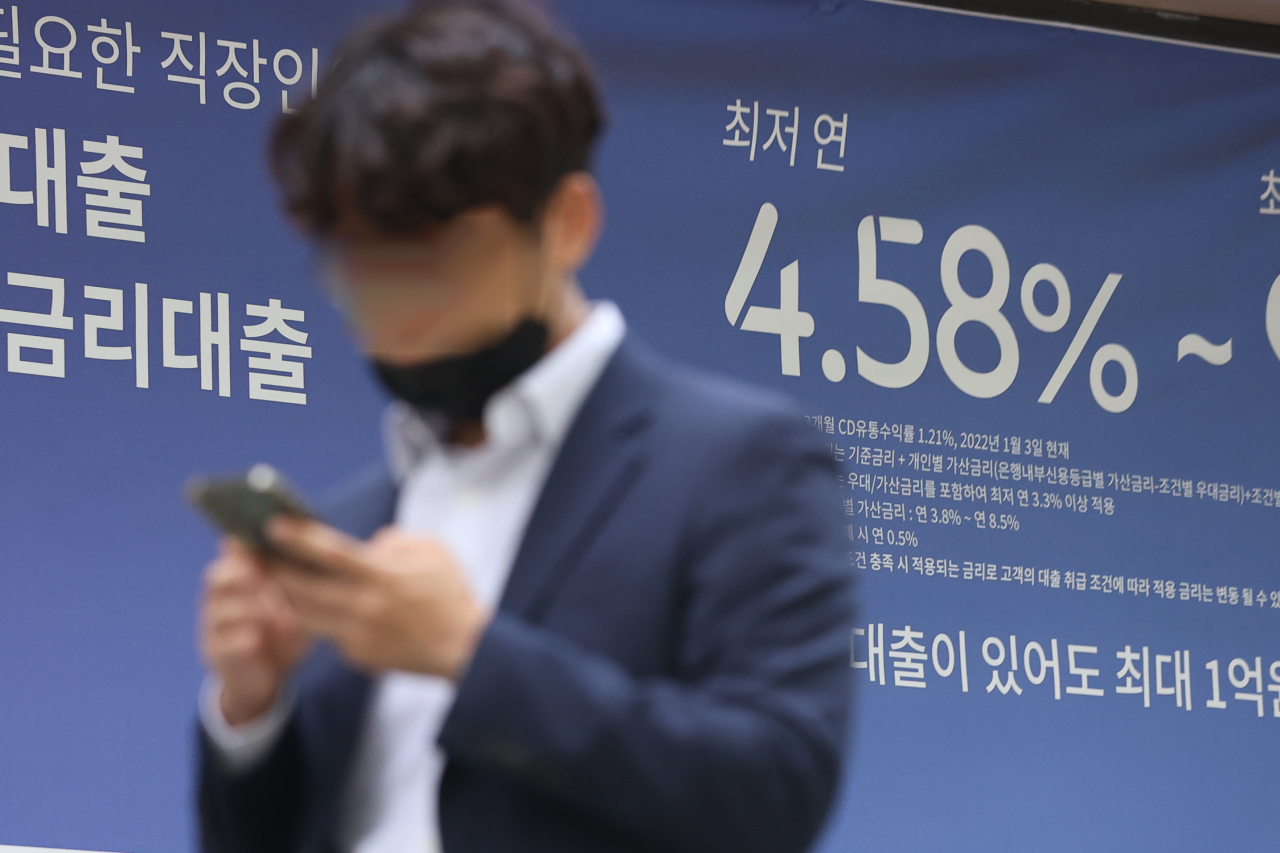 An outdoor sign shows interest rates of loan products from a lender in Seoul, Thursday. (Yonhap)
Retail investors who enjoyed record-low borrowing costs and abundant market liquidity during the COVID-19 pandemic have quickly come to face growing risks from plummeting stock and crypto markets hit by 40-year high inflation in the US and the rapid rate hikes that have followed.

The benchmark Kospi on Thursday closed at 2,451.41, 0.16 percent higher from the previous close, when it dipped to its lowest closing price in 19 months at 2,447.38. The secondary, tech-heavy Kosdaq closed 0.34 percent higher at 802.15, slightly rebounding from Wednesday’s close at 799.92, when it fell below the 800-point mark for the first time in 19 months. The nation’s stock market has been turning bearish in recent months, with the Kospi dropping 26 percent compared from its all-time high of 3,305 points in July last year. Market bellwether Samsung Electronics traded around 61,000 won ($47.40) Wednesday morning, with its market value shedding over 100 trillion won since the beginning of the year. Naver and Kakao, two of the most coveted stocks here, were trading at a sluggish 240,000 won and 72,700 won, respectively, around noon.

According to data provided by the Korea Exchange, the combined market capitalization of the Kospi and Kosdaq has shed 369 trillion won since the end of last year to some 2,000 trillion won.

The deepening global sell-off in cryptocurrencies has affected retail investors here as well. Bitcoin, a popular choice for crypto investors here, plunged as much as 10 percent to an intraday low of $20,166 at one point on Wednesday, according to Coinbase data. It was trading at $22,040 around Thursday noon, but its value has more than halved since it reached an all-time high of over $68,000 in November 2021, after starting the year at just under $30,000.

According to Financial Services Commission data released Monday, the value of the nation’s crypto market comes to 55.2 trillion won, with daily transactions totaling 11.3 trillion won. Of the 623 different cryptocurrencies listed on local exchanges, 403 were those traded on single exchanges. The FSC warned that the value of 219 of the 403 coins listed on only one exchange fell 70 percent from their all-time highs.

The total number of users of cryptocurrency here came to 15.25 million, but users who participate in actual trading amounted to 5.58 million.

Local retail investors are now burdened with dealing with the plummeting value of their investments alongside the growing interest rate of their debt repayment, as the Bank of Korea is also gearing up to carry out further rate hikes in line with the US Fed’s latest decision to raise its rate by 75 basis points.

The US Fed on Thursday raised rates by 75 basis points, as widely expected. Chairman Jerome Powell also hinted that another hike of 0.75 percentage point could come next month if inflation remains high.

The COVID-19 pandemic had given birth to a trend here known as “bittoo” in Korean -- from “bit” meaning debt and “tooja” meaning investment -- which has since softened with relaxed social distancing measures and higher borrowing costs.

Reflecting the “bittoo” trend, the total value of debt extended by brokerages for retail investors for the purpose of stock purchase had nearly doubled from 9.2 trillion won on end-2019 to 16.4 trillion won as of September 2020. Of the age groups, money extended to teenagers and those in their 20s jumped 162.5 percent 420 billion won, in the same period, prompting concerns of heavier debt repayment burden on young Koreans.