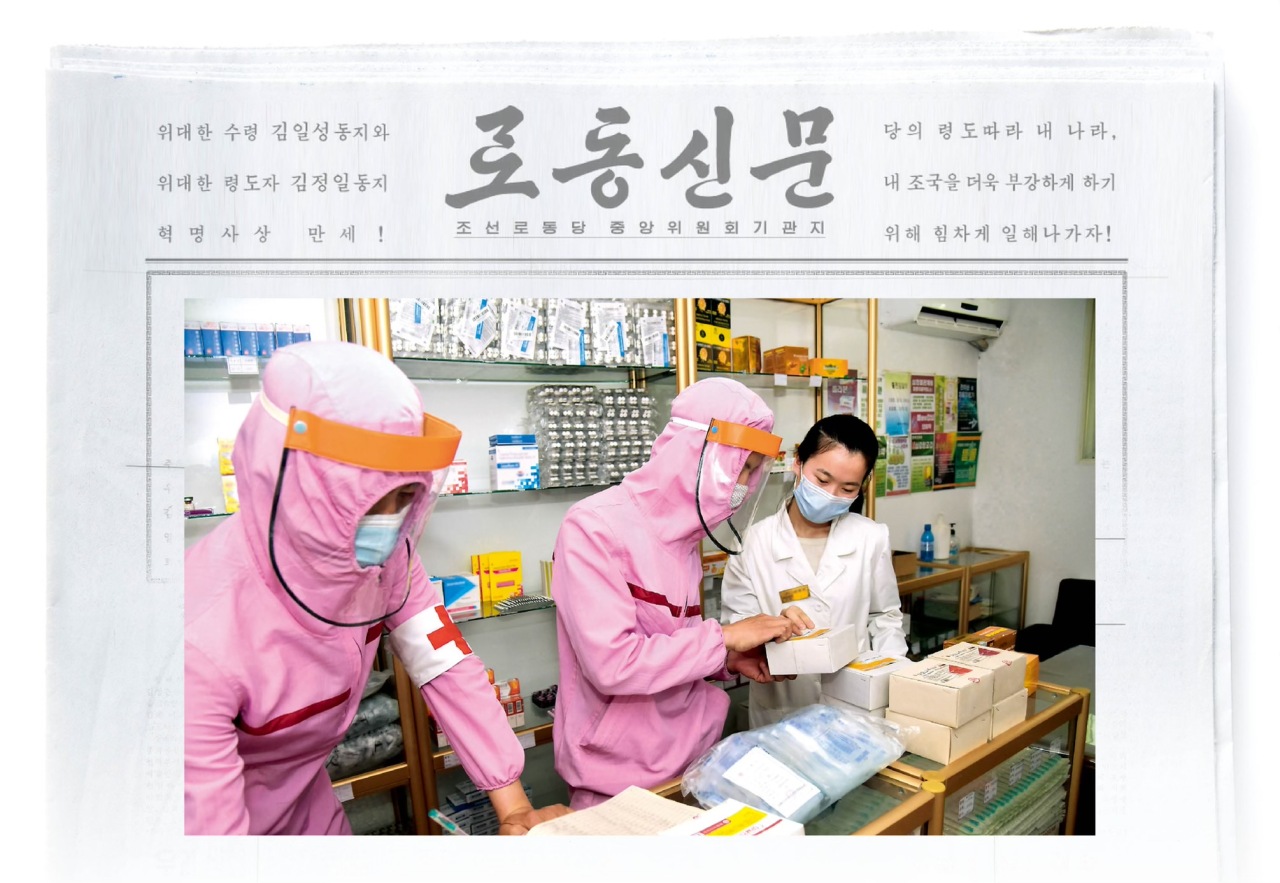 North Korean people’s Army military doctors, wearing what appear to be pink-hooded jackets and face shields, are seen at a pharmacy in an image released by the state’s Korean Central News Agency on Tuesday. (Photo: Yonhap. Graphic: The Korea Herald)
North Korea’s state-run daily can be surprisingly forthcoming, to an extent, in its COVID-19 coverage. But their facts are cherry-picked, and science reporting sprinkled with half-truths or downright inaccuracies.

The Rodong Sinmun acknowledges the possibility of another wave in the months to come, while simultaneously depicting the omicron variant as somehow less threatening -- and as something that may signal a positive turn in the pandemic. In discussions of vaccines, the emphasis is on the flaws, such as their reduced effectiveness against new variants.

All of this rhetoric provides important clues to understanding how North Korea is strategizing its response around the pandemic, according to Park Won-gon, a professor of North Korea studies at Ewha Womans University in Seoul. “The Rodong Sinmun is the Workers’ Party’s propaganda,” he said. “These reportings can’t be taken at face value.”

After acknowledging the local presence of COVID-19 for the first time on May 12, North Korea says it has seen roughly 3,917,580 cases of “fever,” tallied from late April up to 6 p.m. Thursday.


Stress on sufferings of rest of world

Rodong Sinmun likes to make sure people know that North Korea isn’t the only country to be afflicted by the virus.

In a June 2 editorial titled “A May that won’t be forgotten,” the newspaper reminded its readers that the “virus of death,” before it crept into North Korean territories only last month, had “sickened billions, and claimed the lives of millions across the world.”

While highlighting the global nature of the crisis, it praises the superiority of North Korea’s methods and the long period of zero infections.

“For the last two years or so, the novel coronavirus has reached every corner of the world at an alarming pace. By making the virus fight our top national agenda, we acted preemptively and aggressively to protect the safety of our people,” wrote a May 14 editorial with the title, “Let’s rise above the crisis through solidarity.”

“For so long we maintained our guard against the virus. But as various types of variant viruses began to drive up infections worldwide, including in our surrounding countries, our fortress was finally breached by the stealth omicron,” it said.

Under the title “Lessons from the cruel global health emergency,” a May 28 editorial said the West has failed to listen to scientists of the World Health Organization and resisted face-mask wearing.

“As the malignant virus was spreading people in western countries neglected to wear face masks,” it said. “In an unabating global crisis lessons can be derived: Pride and complacency hurt our collective fight.

The newspaper is offering some of its more “scientific” coverage in a series titled “International data on the novel coronavirus disease.” The series, of which six installments have been published so far, briefs readers about the updates in COVID-19 science.

In the series, sources are only opaquely cited -- “a Russian scientist,” “a health website in Italy,” “various global web pages,” “in the case of one country,” for example. Each story is interjected with the author’s interpretations of the facts and theories purportedly taken from unspecified international sources, while borrowing their authority.

One story dated May 26 touted omicron as the variant that may end the pandemic. Incidentally, omicron -- more specifically its BA.2 strain -- is the version of COVID-19 that North Korea has supposedly identified as circulating within its territory.

“Cautious forecasts are emerging in the scientific community that the novel coronavirus pandemic may be coming to an end,” it said.

The story explained that the forecasts of a possible end was “based on the logic that a large number of people would develop immunity after coming down with the highly transmissible omicron variant,” adding, “Then, the novel coronavirus disease could assume a seasonal flu-like status.”

There was a “general consensus among experts” that omicron has “rather expedited the arrival of the endemic phase in the pandemic,” the story said. It quoted “one professor in the UK” in particular as saying: “Although the coronavirus won’t disappear, the majority of people would be conferred with immunity from getting infected once, or several times. Over that process, the disease would ultimately come to be much like other common diseases.”

The story noted that in countries where omicron has spread, infection rates were decreasing as well. The series’ pilot story that came out on May 24 said along a similar vein that since the World Health Organization designated omicron a variant of concern in November last year, omicron spread “at a speed beyond imagination” before cases began to “plummet rapidly” starting in end-February.

The May 26 story then tried to strengthen its argument of omicron bringing an end to the pandemic with an evolutionary history of viruses. “Historically, viruses have evolved to become weaker, and then eventually get sorted into types of common cold, flu or other similar endemic diseases,” it said.

Finally the story concluded: “It should be regarded as a positive that omicron, while not associated with the kind of severe or fatal illness seen in previous variants, provides people with an extra layer of immunity.”

Speaking with The Korea Herald, Dr. Paik Soon-young, a virologist at Catholic University of Korea, said the Rodong Sinmun’s verdict on omicron was “only partly, or sneakily true.”

“To be fair, I recognize some of these statements as something public health authorities elsewhere have said before. But they’re taken out of context, and not quite applicable to North Korea’s situation,” he said. “Other countries have vaccinated their populations, and stocked up on antivirals like Paxlovid when omicron hit. So the reduced mortality is owed to these circumstances, which isn’t the case for North Korea.”

Nor is it true that COVID-19 will always get weaker with every new variant. “Delta is an example of how viruses don’t always transform into milder forms,” he said.

The daily Rodong Sinmun ran about a dozen stories containing the word “vaccine” over three weeks since its official mention of a COVID-19 outbreak on May 12. In these stories, vaccines are portrayed as inadequate tools against variants, namely those belonging to the omicron family.

A story that appeared on the May 24 edition said omicron is “found to have the capacity to evade the immunity of people who have had two doses of a vaccine.”

The story said pharmaceutical companies were “currently working on vaccines that can respond to variants. “Treatments have been developed, but questions are raised over their availability on a global level,” it added.

In a story posted May 27, some warning was issued about the reinfection risks of omicron’s many subvariants --and how neither vaccination nor previous infections can protect people from them. The story said subtypes of omicron were “able to reinfect vaccinated and prior-infected people alike.”

At the same time, the newspaper said the subtypes were less virulent, and not that dangerous.

“According to an expert in one country, BA.2.12.1, a type of omicron, would go on to infect more people as it has a higher transmissibility. But even as it spreads, deaths will continue to decline, as people won’t be as severely affected,” it said.

Another story on May 30 reiterated the shortcomings of vaccines.

“Variants of concern can evade immunity from both vaccines and natural infections,” it said. “There is no evidence that just because more in the population are vaccinated, omicron will turn less fatal.”

The newspaper’s attempts to address what vaccines can do against COVID-19 are not accurate, either.

People who have been vaccinated, or once infected with omicron, are “three to four times less likely to catch omicron again,” said a May 29 story.

But Dr. Chun Byung-chul, an infectious disease epidemiologist and vice president of the Korea Vaccine Society, said existing vaccines are “lousy at preventing omicron infections.” “Their point is to lower the chances of severe progression of the disease,” he told The Korea Herald.

“Without vaccines, North Korea will see a lot more deaths, which otherwise could have been prevented, occur.”

According to the guidelines, in North Korea, a patient is confirmed with an infection based on his or her symptoms, epidemiological link to other confirmed patients, and a positive result from either an RT-PCR or antibody -- not antigen -- test.

The guidelines categorize patients into “mild,” “moderate,” “severe” and “critical” cases. The criteria for each of these categories include body temperature, presence of pneumonia as manifest in chest X-ray scans and blood oxygen levels.

Among other things, using body temperature to determine the severity of illness is “arbitrary” and “misguided,” according to Dr. Eom Joong-sik, an infectious disease specialist at a state-designated COVID-19 hospital in Incheon.

“A patient may as well be severely ill without necessarily experiencing a high fever,” he said.

While the guidelines mention chest scans, Eom said he doubted they were being done on most patients. “That wouldn’t explain why none of the more than 60 deaths linked to COVID-19 were caused by pneumonia,” he said.

“I think they try to bear some semblance of being scientific overall, but if you look at the details, they’re really not,” he said.

Kim said that any discussion on these guidelines would be a moot point unless they were actually being observed by health care personnel working with patients.

“If North Korea is using RT-PCR tests to identify patients, there is no explanation for their reliance on ‘fever’ cases. At best the tests seem to be deployed on a very limited level only,” he said.