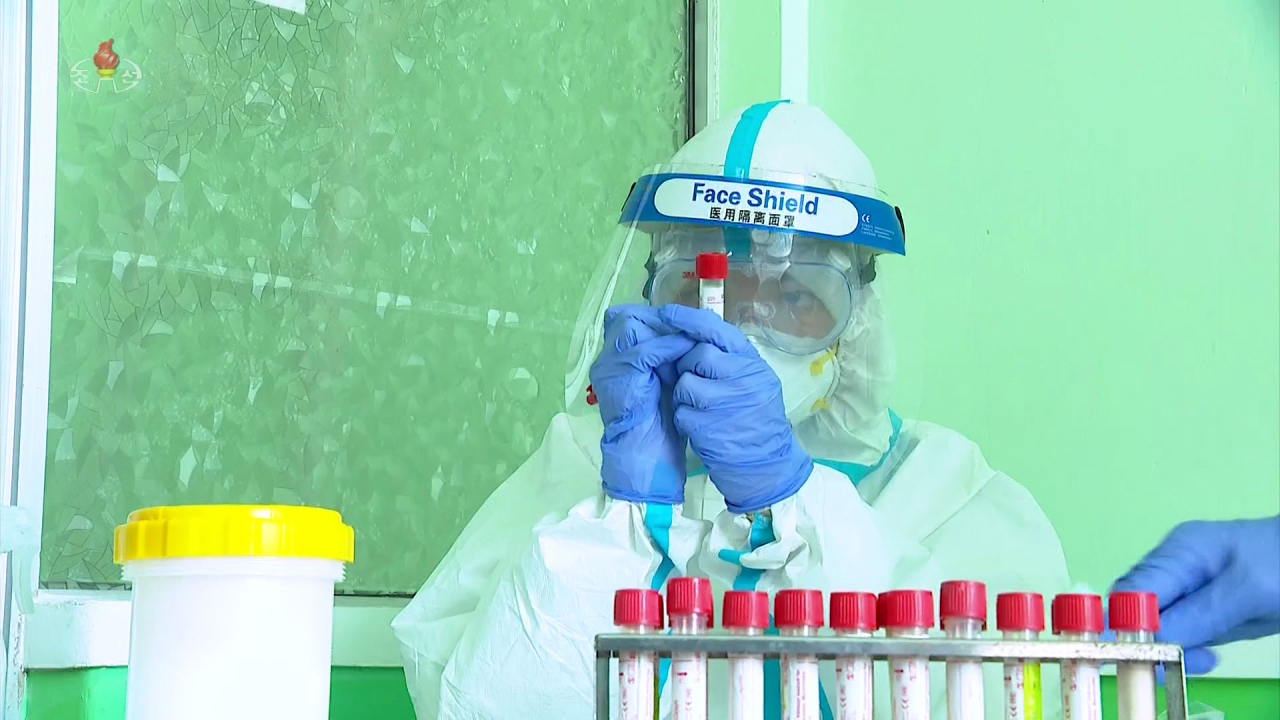 A North Korean medical worker wearing a face shield believed to be made in China collects test samples amid a surge in suspected coronavirus cases, in this photo captured from the North`s official Korean Central Television. (Yonhap)
If the pace of omicron spread keeps up in North Korea, nearly the entire population could end up becoming infected, experts in South Korea say.

North Korea’s cumulative number of “fever” cases stands at 2,251,610 as of 6 p.m. Thursday, according to Workers’ Party of Korea newspaper Rodong Sinmun -- which means roughly 8 percent of its 26 million population have likely been infected.

The true figure, however, could be up to four to five times the official estimate, according to Dr. Kim Sin-gon, the director of the Association of Healthcare for Korean Unification.

Kim said in a forum Thursday that out of all confirmed cases in South Korea, about 25 percent were asymptomatic, and 30 percent of symptomatic cases developed a fever.

“Given the frequency of fever in COVID-19 patients, and the prevalence of asymptomatic infections, as many as 10 million may have already been infected in North Korea,” he said. “At this pace, omicron could infect nearly all of North Korea in a month’s time.”

The peak of North Korea’s ongoing outbreak is anticipated to hit as early as next week or the week after, the National Assembly’s intelligence committee said Thursday.

Rep. Tae Young-ho of the ruling People Power Party, who was once a North Korean diplomat before he defected to the South in 2016, pointed out that the daily increase in cases was declining after about a week since the “first” cases were announced on May 12.

“This suggests some confidence in its lockdown approach to slow the spread,” he wrote in a Facebook post Thursday.

But as deaths usually lag behind the rise in cases, deaths would presumably rise even as cases plateau or subside, said Dr. Paik Soon-young, a virologist at Catholic University of Korea.

“There tends to be a delay between symptom onset and death. So increases are projected in the next few weeks, if the time frame provided by North Korean authorities is accurate,” he said.

Paik said whether it’s a peak or not, North Korea’s caseloads have already reached the worst levels experienced by South Korea.

“The number of cases being reported on a daily basis in North Korea is in the 200,000 to 300,000 range. Given that the North’s population is only about half that of South Korea’s 51 million, their 300,000-something cases a day is tantamount to 600,000 cases seen here at the peak of our own omicron surge in April.”

Officially North Korea has attributed only 65 deaths to COVID-19 to date, with the probable case fatality rate astoundingly low at 0.00288 percent.