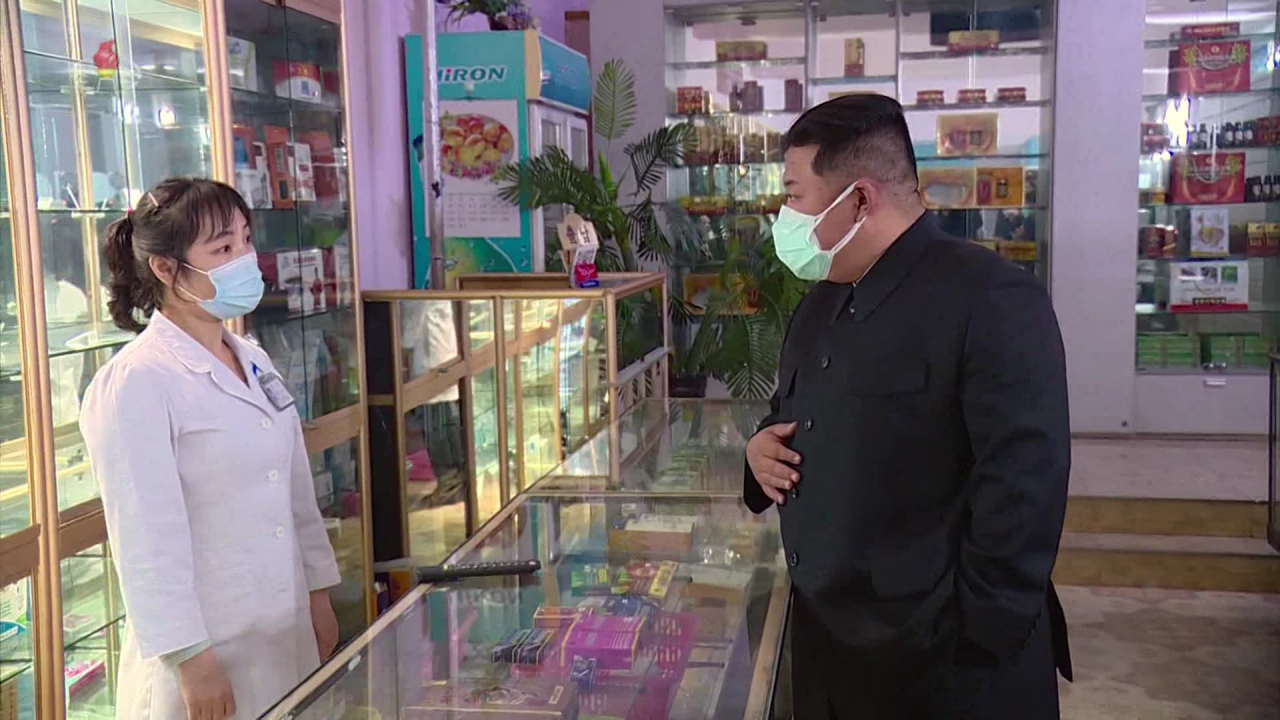 In this footage released Monday by the Korean Central Television, North Korean leader Kim Jong-un was seen wearing a blue surgical mask on top of a white mask of an unknown material. (Yonhap)
Lacking vaccines and treatments, North Korea is deploying unconventional methods to fight its growing COVID-19 crisis. In a mere week since “first” cases were acknowledged on May 12, the number of suspected cases there climbed to nearly 2 million. Outside experts say these estimates are likely a vast undercount of the true scale of the outbreak.

North Korean leader Kim Jong-un was spotted wearing two masks while visiting pharmacies in Pyongyang, according to a footage released by the North’s state broadcaster on May 16.

Back in February, the US Centers for Disease Control and Prevention backed “double-masking” for enhanced protection against omicron, which is more transmissible than delta was. The strain that was identified as circulating in North Korea is omicron’s BA.2 subvariant, which is associated with even higher transmissibility than the original BA.1.

But double-masking, while more protective than a single layer of a cloth mask or a surgical mask, is only recommended as an alternative to N95 or KN95 masks that offer the best protection against the virus, and can be used alone.

It’s not just Kim who was seen donning suboptimal protective gear. In media appearances North Korean health care workers are in thin surgical masks even as they carry out risky tasks such as disinfecting public places and consulting potential patients. 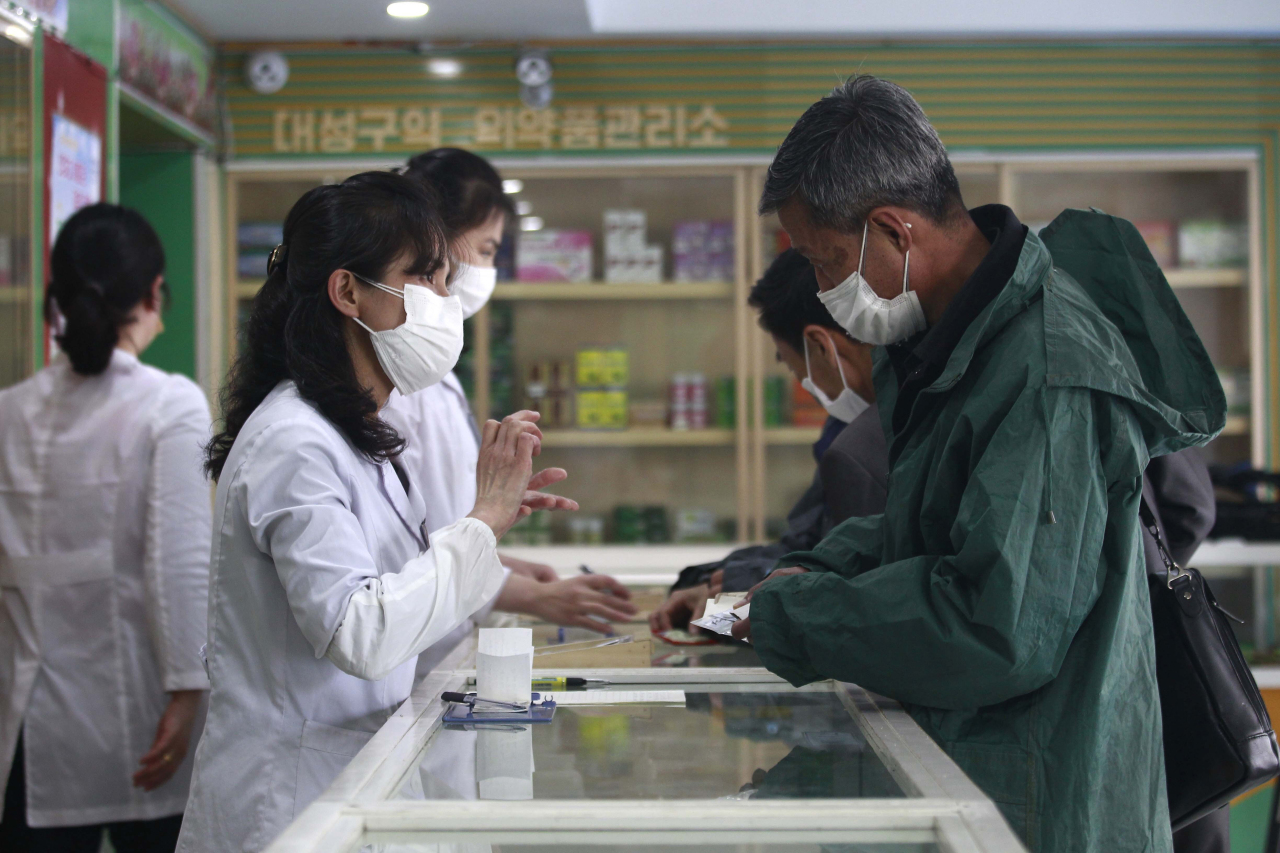 In this photo published by the Korea Central News Agency on Tuesday, a medical worker at a pharmacy is seen wearing two layers of face mask. (Yonhap)

Despite around 20,000 to 30,000 cases of “fever” each day, North Korea’s total associated death count is still in the double digits. Just one additional death was newly registered in the last 24 hours, according to the North’s state-run Korean Central News Agency on Thursday.

The low number of deaths in North Korea is “not proportional” to the caseloads being reported, experts say.

Because of a population-wide immunological naivete to COVID-19 -- meaning no immunity from natural infection or vaccination --, high prevalence of malnutrition and lack of therapies like antivirals, experts have warned North Korea could face a much higher mortality rate than that observed in other countries.

Dr. Cha Ji-ho, a global health professor at the Korea Advanced Institute of Science and Technology researching North Korea’s pandemic developments, said the numbers “seem too out of proportion to be credible or derive any scientific interpretations from.”

The latest available statistics from the Korean Central Television showed children and adolescents younger than 20 years of age accounted for 30 percent of 56 deaths accumulated up to 6 p.m. Monday in North Korea. In South Korea, less than 1 percent of all known deaths are in those under 20.

This may be partly attributable to poor health status of North Korean children. According to the Global Nutrition Report’s 2017 data, 19 percent of children under 5 years of age in North Korea were stunted or too short for their age usually from undernutrition.

North Korea, which has a limited testing capacity, is only counting people with fever to measure the size of its omicron outbreak.

But fever was present in less than half of symptomatic omicron cases in South Korea, according to Ministry of Health and Welfare’s spokesperson Son Young-rae on May 16. Omicron is known to primarily affect the upper respiratory tract, with the most commonly reported symptoms being sore throat, runny nose and sneezing.

Infectious disease professor Dr. Kim Woo-joo of Korea University said a higher frequency of fever among North Koreans was “probable due their being unvaccinated.”

“But a lot remains opaque, like the definition of what constitutes a fever,” he said.

Up to as recently as Wednesday, the country still has not reported any cases or deaths to the World Health Organization. 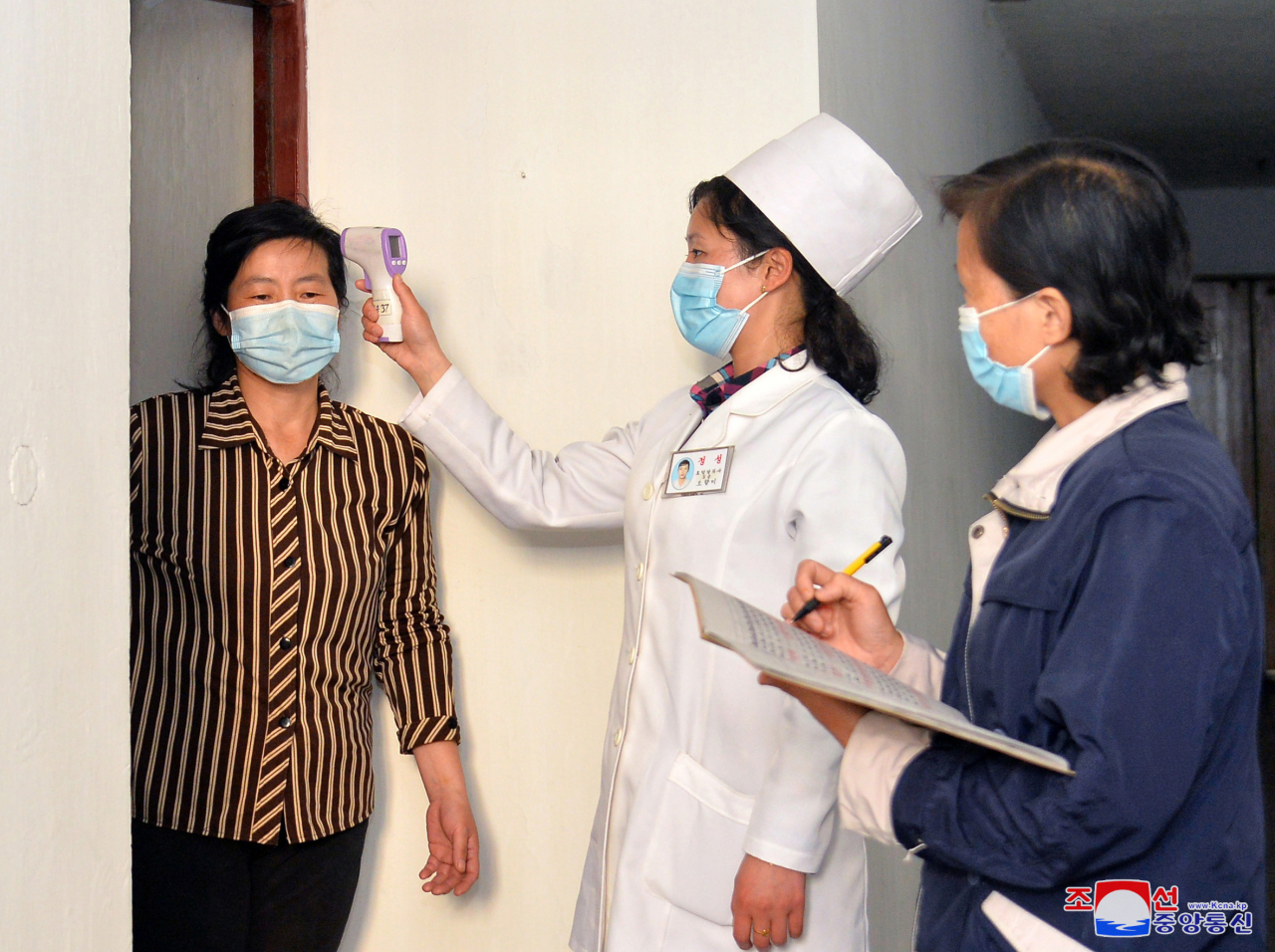 A medical worker checks a resident’s temperature using a non-contact thermometer in this photo released by the Korean Central News Agency on Tuesday. (Yonhap)

North Korean authorities are promoting unproven approaches for people to treat themselves at home.

Willow tea leaf, honey and other home remedies were advertised by the state media outlets as ways to soothe symptoms. Paracetamol, ibuprofen, injections of penicillin were recommended as treatments for people with fever.

In fact, “adverse reaction to medication” is supposedly one of four causes of COVID-19-related deaths as categorized by North Korean authorities. The other three are “underlying illness,” “fever spasm” and “laryngospasm.”

Dr. Choi Jung-hun, who worked at North Korea’s state epidemic control division before fleeing to the South in 2012, said essential medical equipment of all kinds would be in short supply there.

“When the swine flu hit North Korea in 2009, Tylenol doses donated from abroad were prescribed to the most at-risk patients only, and even then they could not be given in the standard dosage. The rest were lucky to receive maybe Tylenol,” he said.

After refusing offers of vaccine donations in favor of its zero-COVID strategy, North Korea is “believed to have changed its stance,” according to South Korea’s spy agency Thursday.

Dr. Oh Myoung-don, who heads the clinical committee for infectious diseases at South Korea’s top National Medical Center, said in a virtual forum Monday that treatments were the most urgently in North Korea -- moreso than vaccines.