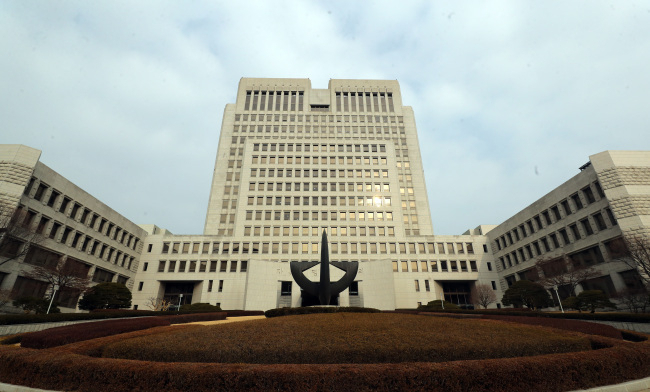 The Supreme Court of South Korea in southern Seoul. (Yonhap)

The Supreme Court on Thursday ruled against the peak wage system introduced by a large number of local companies to gradually cut the salaries of senior workers several years before retirement.

The top court said the peak wage system is an illegal discrimination against workers on the basis of age, making the first ruling of its kind in a lawsuit filed by a former employee of a local research institute.

The plaintiff who joined the institute in 1991 retired honorably in 2014.

The institute introduced the peak wage system for employees over the age of 55 in January 2009 through an agreement with the labor union and the plaintiff became subject to the system in 2011.

The person started a lawsuit to demand the reimbursement of the wages lost before retirement, claiming the basic wage was reduced after a two-level fall in rank and a 49-level drop in the competency grade under the new wage system.

The issue in the litigation is whether the institute's peak wage system is in violation of the Act on Prohibition of Age Discrimination in Employment and Aged Employment Promotion, which prohibits discrimination against workers on the basis of age without reasonable causes.

Both district and appellate courts have ruled in favor of the plaintiff, saying the peak wage system is invalid due to its violation of the elderly employment law.

The peak wage system has been widely adopted by local companies, particularly in the public sector, since the early 2010s to cut the salaries of their senior employees in order to create more jobs for young people amid a high youth unemployment rate.

Lower courts have so far come up with mixed verdicts on the peak wage system, but the latest ruling from the Supreme Court is expected to strike at the root of the system. (Yonhap)