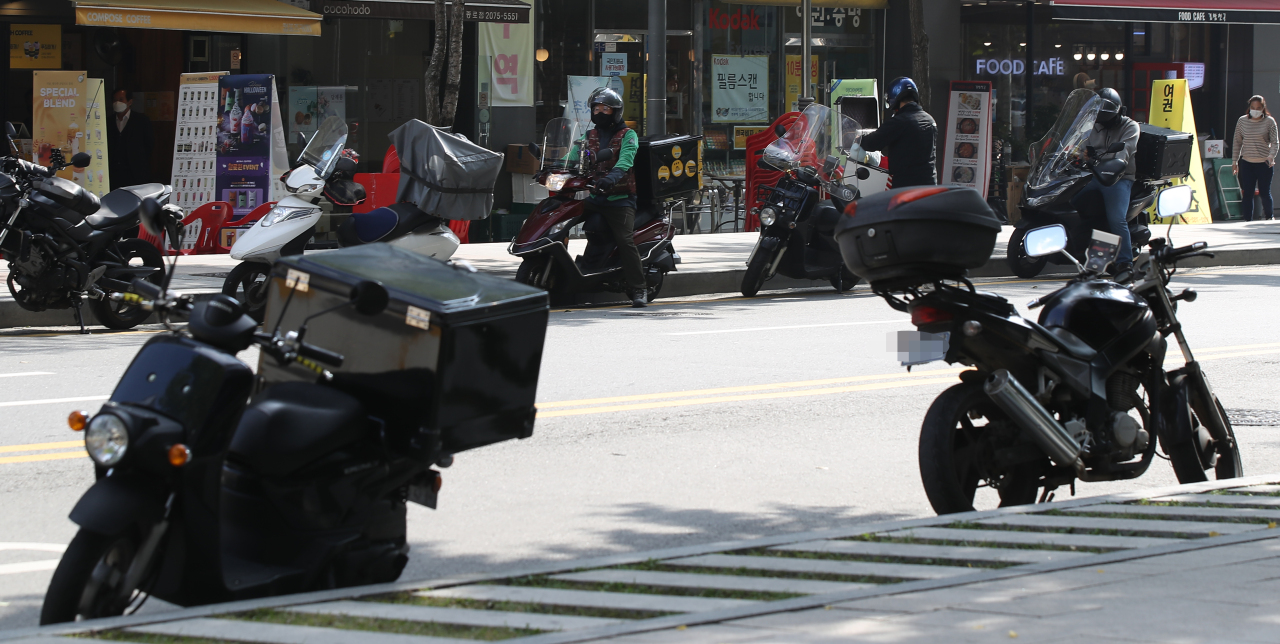 But amid growing competition and a push by delivery apps for “one order per trip” to promise a speedy service, a delivery rider shortage is likely behind the rising cost of your order, industry sources said.

According to IGAWorks’ mobile index, Android phone users who used delivery apps Baemin and Yogiyo dropped by 8.9 and 7.5 percent, respectively between Nov. 1 and Nov. 12.

But the competition to hire riders appears to be growing nonetheless. Reports revealed earlier this month that a Gyeonggi Province-based delivery company raised its basic delivery charge from 3,500 won to 4,500 won.

“The issue surrounding the supply of riders is serious, with major delivery platforms doing promotions (to attract riders). There is a question mark over whether the situation is sustainable,” one official at a last-mile delivery service company said.

“There is an issue for companies in terms of profit. Delivery costs are also rising which will ultimately hurt customers.”

At one restaurant in Seoul, ordering a 12,000 won dish of dumplings on delivery app Baemin could come with a delivery fee of 6,000 won, for example.

Industry sources say the delivery charges sometimes do not fully cover the restaurants’ delivery costs, depending on the location.

Another official at a delivery app operator said it is the “one order per trip” system that is behind the growing cost. The system requires riders to deliver just one order at a time, rather than making multiple delivery stops on the same trip, ensuring freshness of the food and reduced delivery times.

“To make sure that a ‘one order per trip’ system works smoothly, you need to secure more riders. Delivery apps like Baemin and Coupang Eats, for instance, offer incentives to riders during peak hours.”

The official added the incentives were paid for by delivery platforms who set aside a budget so as to avoid putting a burden on customers and restaurant owners.

But growing competition means that other delivery companies are pressured to follow suit.

Some have called for apps to guarantee riders a minimum level of pay.

In a recent report, the Gyeonggi Research Institute said this “minimum commission,” a substitute for minimum wage, should be considered to prevent the competition for drivers from spiraling out of control.