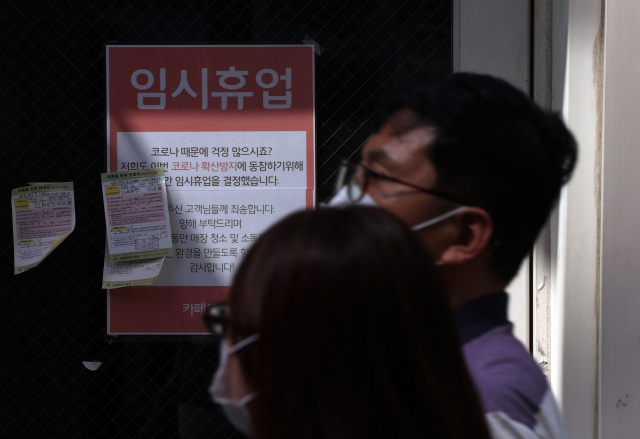 This undated file photo shows a temporarily closed sign posted on the door of a cafe in Seoul. (Yonhap)
The ratio of the self-employed and other nonwage workers in South Korea touched an all-time low in 2021 amid the coronavirus pandemic, government data showed Thursday.

Asia's fourth-largest economy had 6.52 million unsalaried workers as of the end of December last year, marking the 23rd consecutive year of decline, according to the data compiled by Statistics Korea.

The number accounted for 23.9 percent of the country's total employed people, the lowest tally since data tracking began in 1963.

Of the total nonwage workers, self-employed people numbered 5.51 million last year, with the rest working at family-run operations without pay.

In contrast, there were 20.75 million wage workers in South Korea, taking up 76.1 percent of the country's total employees. The number was up 51.9 percent from 20 years earlier.

Despite its steady decline, South Korea's portion of nonwage workers was still higher than that in other major advanced economies, ranking eighth among the comparable 35 members of the Organization for Economic Cooperation and Development (OECD) as of 2019.

Comparable figures were 6.1 percent for the United States and 10 percent for Japan, according to the data. (Yonhap)