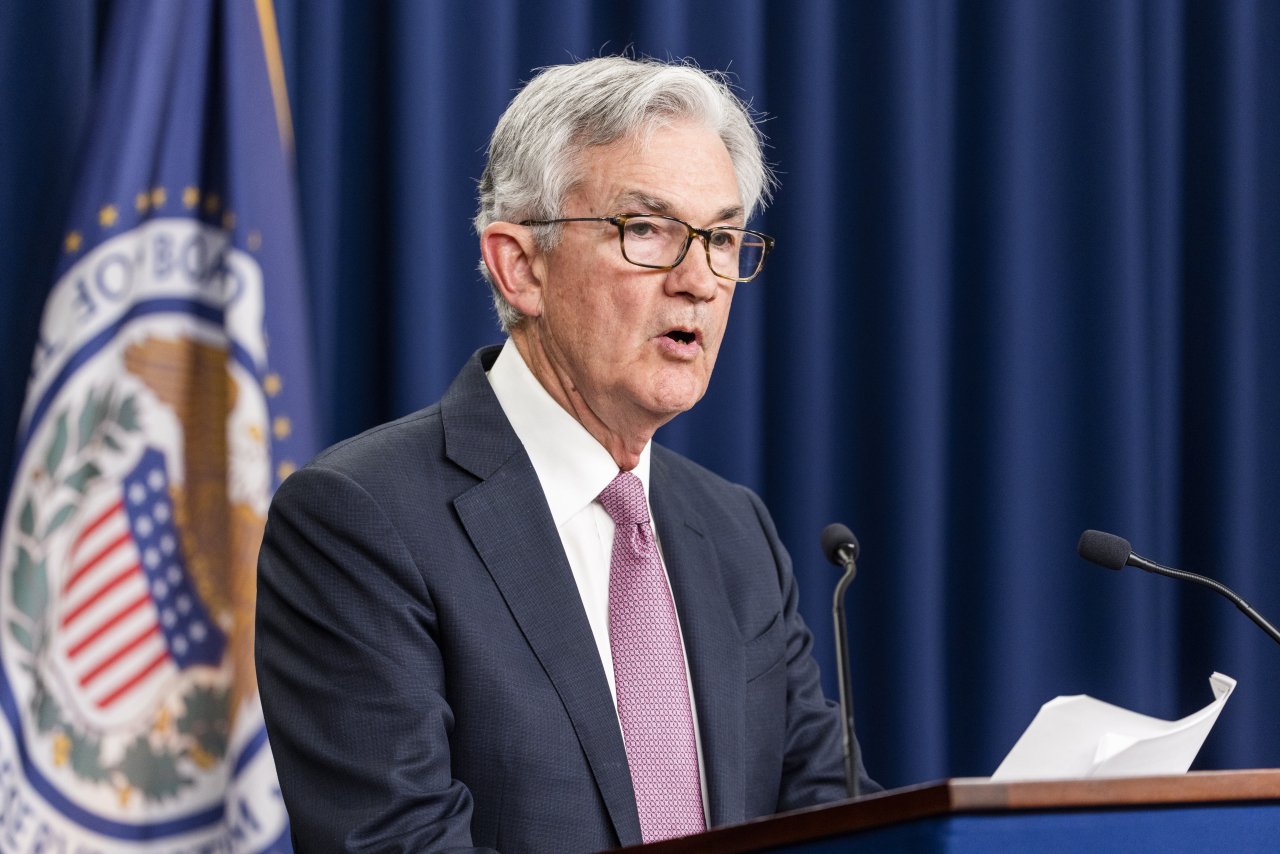 Federal Reserve Board Chairman Jerome Powell holds a news conference after the Fed agreed to raise interest rates by half a percentage point at the William McChesney Martin Jr. Building in Washington, DC, USA, on Wednesday. It is the biggest interest rate hike in 20 years. (EPA-Yonhap)

WASHINGTON -- The Federal Reserve on Wednesday announced its biggest rate hike since 2000, with a half percentage point increase as it works to crush soaring US inflation.

With inflation at the highest rate in four decades, Federal Reserve Chair Jerome Powell sent a message directly to the American people, expressing concern for the pain caused by rising prices, and pledging to use all available tools to bring them down.

But he told reporters he remains confident the economy is strong enough to withstand rate increases without tipping into a recession.

After a quarter-point hike in March, the US central bank's policy-setting Federal Open Market Committee (FOMC) pushed the benchmark interest rate above

0.75 percent as it works to cool the economy, and confirmed more increases "will be appropriate."

The hike will raise the costs of all types of borrowing, from mortgages to credit cards to car loans, cooling demand and business activity.

Inflation has become an overriding concern after the world's largest economy saw annual consumer prices surge 8.5 percent over the 12 months to March -- the biggest jump since December 1981.

Policymakers continue to believe inflation will gradually return to the Fed's two-percent target as it raises borrowing costs, but in a statement following the conclusion of its two-day meeting, the FOMC said it will be "highly attentive to inflation risks."

In an unusual move, Powell opened his news conference speaking to the American people.

"Inflation is much too high. And we understand the hardship that is causing," he said, promising to use all tools available to bring it down "expeditiously."

He acknowledged that higher interest rates also bring their share of pain, but "everyone would be better off if we can get this job done. The sooner, the better."

To achieve that aim, he said "additional 50-basis point increases should be on the table at the next couple of meetings," however, a more aggressive three-quarter point hike is not under consideration.

The Fed's goal is to engineer a "soft landing," reining in inflation while avoiding a contraction in economic activity, and Powell said that outcome is likely.

"It's a strong economy, and nothing about it suggested... that it's close to or vulnerable to a recession," he said.

But with China's pandemic lockdowns worsening global supply snarls and the war in Ukraine pushing commodity prices higher, analysts fear factors beyond the central bank's control could undermine that goal, and perhaps plunge the US economy into a recession.

The FOMC acknowledged the "highly uncertain" impact of Russia's invasion of Ukraine and Western sanctions on Moscow, which are "creating additional upward pressure on inflation and are likely to weigh on economic activity."

In addition, Covid lockdowns in China "are likely to exacerbate supply chain disruptions," the statement said.

Though it contracted in the first quarter, Powell said the economy was healthy enough to withstand higher rates, and pointed to robust job gains and strong household and business spending.

However, central bankers cannot engineer a solution for the worker shortages that have challenged businesses and raised fears of a wage-price spiral, when employees demand higher salaries and fuel price increases.

Powell downplayed those concerns, saying some of the inflation is due to price shocks, while Fed policy can help address the "imbalance" in the labor market.

On Wednesday, payroll services firm ADP reported private employers added a weaker-than-expected 247,000 workers in April, a sign that companies are struggling to find available labor, while government data released Tuesday showed there are nearly two openings for every job seeker.

The FOMC also said it would begin reducing its massive bond holdings starting June 1, beginning at the pace of $47.5 billion a month, and then doubling after three months, also aimed at removing stimulus from the economy.

The decision was widely expected, and many economists believe the FOMC will again hike rates by a half-point in June, though Ian Shepherdson of Pantheon Economics said, "After that we think all bets are off, given the likelihood of a steep, sustained drop in inflation, a clear softening in manufacturing, and a meltdown in housing market activity."