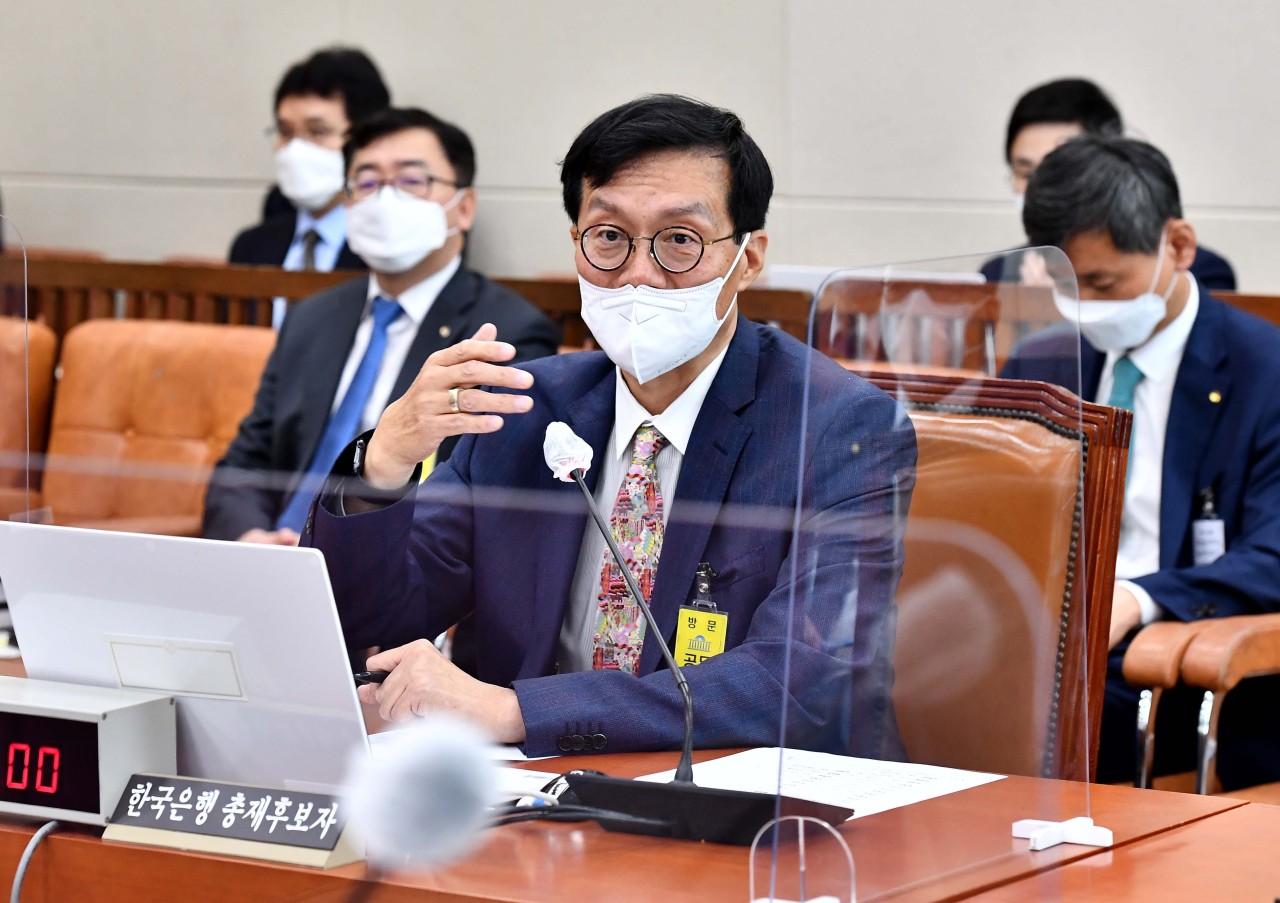 BOK chief nominee Rhee Chang-yong attends a parliamentary confirmation hearing for his nomination at the National Assembly in western Seoul on Tuesday. (Yonhap)
South Korea’s central bank plans to give appropriate “signals” to quell inflationary pressure, the nominee for the Bank of Korea chief said Tuesday, confirming his stance for further rate hikes in months to come.

Rhee Chang-yong, former director of the Asia and Pacific department at the International Monetary Fund, told lawmakers that the central bank will focus on placing a cap on the high inflationary pressure through “signals” at the moment, even if the move may fail to earn “popularity” among the public and the market. Rhee’s remark came during a parliamentary confirmation hearing held after his nomination as the BOK governor last month.

Rising inflation is currently due to risks tied to the global supply bottleneck and other supply-related issues, he said. Inflation could see further upward pressure after social distancing rules are further lifted, with a sharp surge in consumer spending that is also expected to continue rising for the next one or two years, he added.

The failure to give preemptive signals to the market could result in higher inflationary pressure, but at the same time, the BOK will tread cautiously with the pace of monetary tightening, Rhee said. Raising the interest rate at a “fast pace” after a steep rise in inflation could entail various side effects for the financially vulnerable, as seen in the US Fed’s recent rate hikes, according to the chief nominee.

The latest rate hike reflected the BOK’s decision to put risks stemming from upward inflationary pressure before the downward pressure on the economy, Rhee said. He said that the monetary policy direction from this point would be based on detailed observations and reviews of uncertainties related to inflation and the economy.

“While the global spread of COVID-19 has been slowing, Korea has been dealing with expanded global risks including a rapid spread of the omicron variant in China,” he said.

On the nation’s household debt surge, Rhee said that while the momentum has slowed in recent months, the amount still remains high. Public concerns of higher rate hikes leading to increased debt burden and borrowing cost on households have been high. Many people had taken out loans during more than a year of record-low interest rates during the pandemic.

Regarding criticism that his nomination was the outgoing Moon Jae-in administration’s last attempt to exercise its power over the selection of key staff members, Rhee said he would respect the assessment of the monetary policy board members. Rhee’s nomination by President Moon caused controversy, as President-elect Yoon Suk-yeol’s office said there were no prior consultations on the decision.