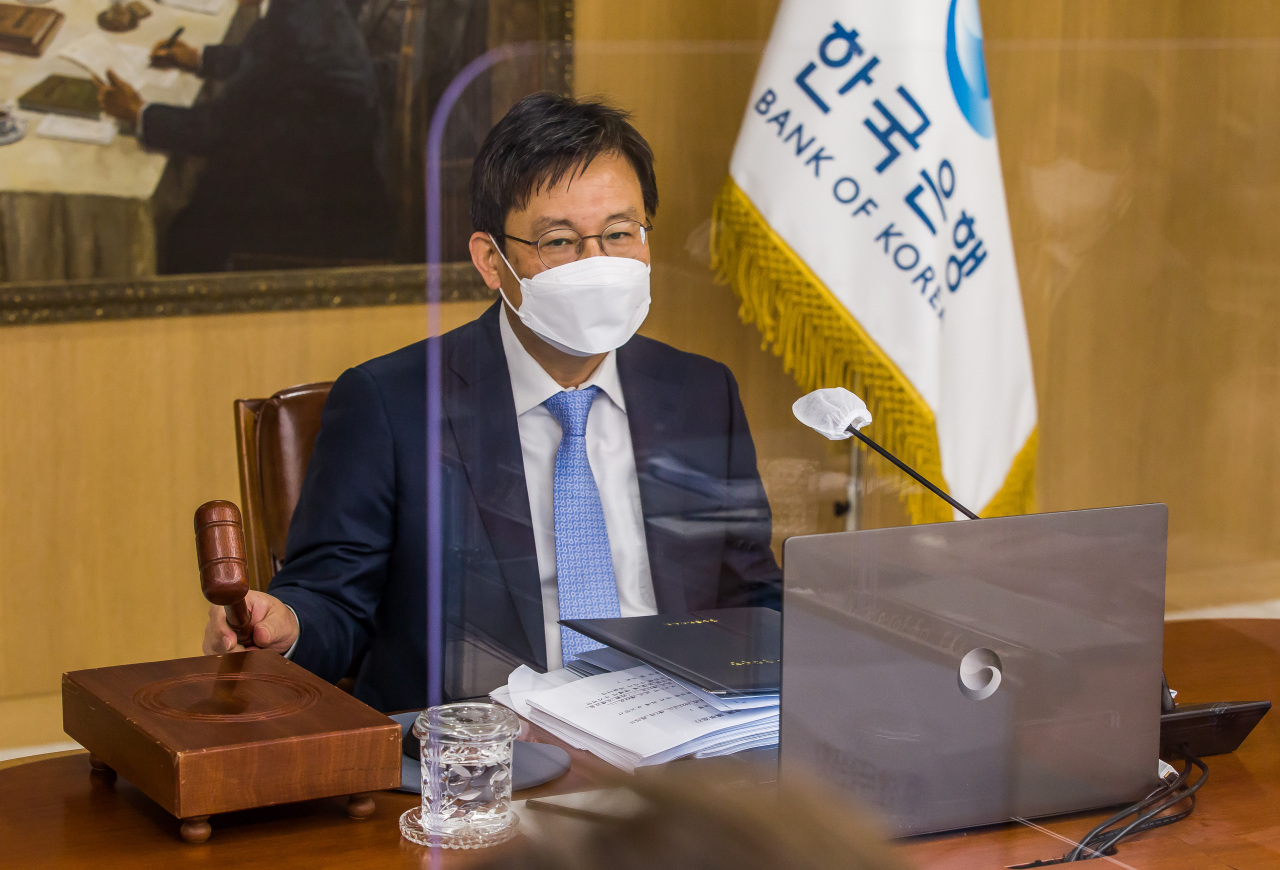 Joo Sang-yeong, the Bank of Korea`s monetary policy board member presides as the acting chair over a rate-setting meeting held at the central bank headquarters in Seoul on Thursday. (Yonhap)
South Korea’s central bank on Thursday raised its benchmark interest rate by a quarter percentage point to 1.5 percent, with an official warning of growing inflationary pressure and slower-than-expected economic expansion.

The Bank of Korea’s six-member monetary policy board unanimously voted to raise the base rate to 1.5 percent -- the highest level since July 2019 –- during a rate-setting meeting. It marks the central bank’s fourth pandemic-era rate hike, dating to August last year when the BOK raised its record-low rate of 0.5 percent by a quarter percentage point.

The latest rate hike comes as the global economy has been witnessing a somewhat moderated recovery from the COVID-19 pandemic and high inflation, with various risks including the Ukraine crisis and the ongoing global supply bottleneck.

“While consumer inflation was projected to go down after peaking around the second quarter, the Ukraine crisis has added uncertainties to the timeline,” Joo Sang-yeong, a monetary policy board member, said in a briefing tied to the rate-setting meeting. Joo is currently serving as the acting chair of the policy board meeting, with BOK Gov. nominee Rhee Chang-yong, tapped last month by President-elect Yoon Suk-yeol, yet to officially take office.

“The BOK projects the inflation target to reach 4 percent or near the level,” he added.

The BOK previously set this year’s inflation target at 3.1 percent in February, but Joo cited surging oil and raw material prices alongside Russia’s war in Ukraine as catalysts behind the current upward inflationary pressure. However, the acting chair brushed off the possibility of the economy heading into stagflation, referring to slow economic growth coupled with rising inflation.

While the economic growth won’t be “slow,” it is forecast to fall short of its previous 3 percent growth forecast for 2022, also affected by the Ukraine crisis, the BOK noted.

“South Korea’s economy will continue its recovery through solid exports and recovery in private consumption, but will be affected by the Ukraine crisis,” the central bank said in a statement.

It pointed to the development of the pandemic, global inflation, major economies’ monetary policy shifts and geopolitical risks as factors that will steer the wheel of the global economy henceforth.

On concerns that the US Federal Reserve’s expected “big step” rate hike -- the central bank is projected to raise rates by half a percentage point per meeting in the second half of the year -- will cause an outflow of foreign capital from the Korean market, Joo said that the “possibility is low.” He explained that while it is true that the Fed’s steep rate hikes have led to strong dollar trends and a capital outflow pressure here, Asia’s fourth-largest economy is unlikely to see large amounts of capital move out at the moment due to the strong economic growth it has been displaying.

The US Fed raised the benchmark rate by 25 basis points to a range of 0.25-0.5 percent last month, its first pandemic-era rate hike since 2018.

Korea’s exports, which account for more than half of the nation’s economy, rose 3 percent in the first 10 days of April from a year earlier on the back of demand for chips and petroleum products, recent data from the Korea Customs Service showed. Exports came to $15.3 billion in the April 1-10 period, compared to $14.9 billion a year earlier.

Thursday’s rate-setting meeting marks the first such meeting to be held amid the leadership vacancy at the BOK. Former BOK Gov. Lee Ju-yeol stepped down from office on March 31 and Rhee is set to officially take office after a parliamentary confirmation hearing slated for Tuesday.